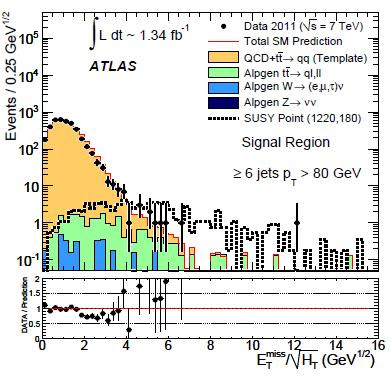 As the chart (from here) above illustrates, the Large Hadron Collider is providing excellent confirmation of the Standard Model of Particle Physics and strong exclusions for any Beyond The Standard Model physics, including anything predicted by supersymmetry (i.e. SUSY), at the energy scales that it is capable of exploring.

Another chart (from the same source blog post) maps the exclusion range for two key SUSY parameters that determine the masses of all of the SUSY particles:

the two quantities on the axes are the universal masses of scalars (in the horizontal axis) and fermions (in the vertical axis). The filled areas contain parameter space points excluded by previous experiments; the black thin lines show the mass of gluinos and quarks that the parameter space points correspond to. The ATLAS exclusion region is the one to the left and below the thick purple curve. In green is shown the result of another ATLAS search, which considered events with smaller jet multiplicities, again containing large missing Et. 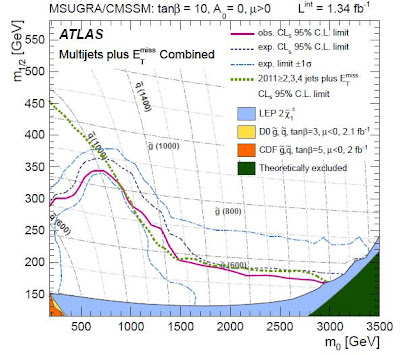 In supersymmetry models where R parity must be observed (i.e. supersymmetric-ness like baryon number, lepton number, and charge must be conserved in a particular way), this leaves only a couple of stable superpartners. The much higher masses of superpartners than ordinary particles presumably also imply that they decay much more rapidly than ordinary particles when they aren't stable rest states.

Lubos cites a claim that the exclusion ranges aren't quite as tight as the chart above would suggest. One model he cites (and in fairness, he cites it simply as an example to illustrate that LHC boundaries aren't really so tight and not as a likely correct version of SUSY) claims that there could be a Higgs (a neutral scalar boson), a neutralino (a neutral fermion) and an stau (a charged boson) all with masses between that of a Z boson and a top quark that remain undiscovered. It claims that:

While basic supersymmetric constructions such as mSUGRA and the CMSSM have already suffered overwhelming reductions in viable parameterization during the LHC's initial year of operation, about 80% of the original No-Scale F-SU(5) model space remains viable after analysis of the the first 1.1 fb^-1 of integrated luminosity. This model is moreover capable of handily explaining the small excesses recently reported in the CMS multijet supersymmetry search, and also features a highly favorable "golden" subspace which may simultaneously account for the key rare process limits on the muon anomalous magnetic moment (g - 2) and the branching ratio of the flavor-changing neutral current decay b to s\gamma. In addition, the isolated mass parameter responsible for the global particle mass normalization, the gaugino boundary mass M_1/2, is dynamically determined at a secondary local minimization of the minimum of the Higgs potential V_min, in a manner which is deeply consistent with all precision measurements at the physical electroweak scale.

But, I find it extraordinarily unlikely that there are thirteen undiscovered SUSY particles with masses of less than 800 GeV out there (some fermions, some bosons (scalar and non-scalar), some charged, some electromagnetically neutral), yet somehow LHC and every other detector known to mankind has never seen a convincing whiff of even one of them.

The spectrum of superpartners, at this stage of the exclusion range, seem to be limited to what amounts of another high energy phase of particles that are never found in nature at anything other than energies seen moments after the Big Bang and have almost no influence at all on lower energy Standard Model interactions. SUSY exists mostly to keep the Standard Model equations well behaved at high (roughly TeV plus) energy scales and the evidence is overwhelming that SUSY adds no predictive experimental power to the Standard Model at early LHC run scales.

The only really strong phenomenological implication of SUSY at low energies is that it provides dark matter candidates, most probably in the form of a neutralino in the hundreds of GeV plus mass range.


Experimental data from dark matter searches related to models of the large scale structure of the universe and the direct detection experiments leave only a twinkle of a change that there could be anything in the single digit GeV range (it would probably have to have different cross sections of interaction within the Earth and in open space by a factor of about 0.7), and the large scale structure data points towards dark matter particles about six orders of magnitude lighter (i.e. lighter by a factor on the order of 10^6) than the proposed neutralino mass in the toy model of SUSY that Lubos refers to in his post.

If SUSY isn't providing a dark matter candidate, and isn't explaining any sub-TeV energy scale phenomena, it becomes increasingly clear that even if SUSY is out there is some way, that it is utterly irrelevant from a technology perspective and can't add much to any other branch of science outside high energy physics. At the energy scales where it becomes relevant, conditions are too energetic to even be very useful in modeling the internal workings of stars in any way that is observable. It might conceivably help us make sense of how the pieces in the Standard Model fit together better, but that is about it.

All of this has deeper stakes than SUSY extensions of the Standard Model, of course, because all versions of M theory a.k.a. String Theory, have SUSY embedded into them as a low energy limit of the theory. The positive piece of this, of course, is that the Standard Model is the low energy limit of SUSY. The negative piece of this, however, for string theorists, is that a failure to find any evidence of SUSY casts doubt on String Theory as a whole.

If a SUSY sourced dark matter candidate consistent with other lines of evidence about dark matter mass ranges is not found, all of string theory is strongly disfavored by the available data from experiments and astronomy observations.

In the meantime, all eyes will be on what LHC can tell us about the 115 GeV-125 GeV mass range, which is for a wide variety of reasons the most plausible mass range by far for a Standard Model Higgs boson or a lightest SUSY Higgs boson, if one exists, given the data we have in hand right now.  A "medium weight" Higgs has been all but completely ruled out and the mass limitations on a very heavy Higgs (>500 GeV), which itself necessarily requires beyond the Standard Model physics, are increasingly rising as well.
Posted 11:57 AM
Email ThisBlogThis!Share to TwitterShare to FacebookShare to Pinterest
Labels: experimental BSM data, physics