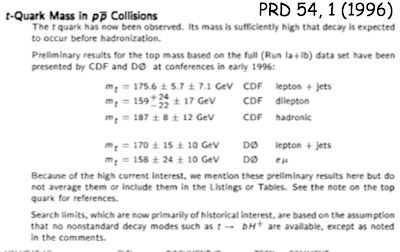 I note a theoretical estimate of the top quark mass and CP violating phase of the CKM matrix from 1990 (the formula was refined in 2004). The prediction was for a top quark mass of about 171 GeV and a CP violating phase of 72-75 degrees. The current value as of 2011 is about 172.9 +/- 1.5 GeV and a CP violating phase of about 69 degrees plus or minus 4 degrees.  Thus, both predictions from 21 years ago by Mr. Krowlikowski in this paper were within 1.5 standard deviations of current experimental values, despite quite uncertain inputs from other masses that he had to use to make the prediction at the time.  (He also published a 1992 paper and a 1999 paper on the same theme (see also here), was expanding on another 1990 paper in his predictive paper, has an interesting 1999 paper and 2001 paper on neutrino mixings and papers in 1980 and in 1987 on preon models, a composite Higgs model in 1992 and in 1998, in 2000 (also here) and in 2001 on a four neutrino model with a sterile neutrino).

He was making a prediction in 1990, not a post-diction. While top quarks were predicted in the 1970s and bottom quarks were observed in the 1980s, the first top quark was observed in 1992, and we had no really definitive information about their properties until 1994. Krowlikowksi, of Warsaw University, had a minimum bound by Tevatron on top quark mass, but it wasn't a very firm one in 1990. The CP violating phase of the CKM matrix also wasn't very refined at that point.  Even in 1996, a couple years after the quark had been observed in large enough numbers to pin down its mass, the uncertainties in the values where huge, as shown in the Particle Data Group clip (via Resonnances), above.

As I've noted in a previous post, the top quark mass is an outlier that is higher than expected in some of the better known empirical mass matrix formulas, so there was nothing obvious from a theoretical perspective about the mass of the top quark.

Given that his paper predicts well in advance two parameters of the Standard Model consistent to within reasonable tolerances of the current experimental values despite the fact that he was working with inputs from other fundamental particle masses and CKM matrix entries that were known less accurately from experiment then than they are today, his formula deserves a second look and he deserves a certain amount of credit for making an accurate prediction.
Posted 10:22 PM
Email ThisBlogThis!Share to TwitterShare to FacebookShare to Pinterest
Labels: physics, Standard Model physics