The (Absence of the) Acheulean In Asia

The Acheulean period corresponds it a material culture made of stone tools more sophisticated than those of the previous "Clactonian or Oldowan/Abbevillian industries but lacking the sophistication of the (usually later) . . . Middle Palaeolithic technology, exemplified by the Mousterian industry."

Generally, Acheulean technology is seen as a proxy for Homo Erectus or species of hominins fairly closely related to Homo Erectus, while Mousterian industry is associated with Neanderthals as is at least one later stone tool material culture. Later stone tool material cultures are associated with modern humans.  Oldowan technology as long as 1.76 million years ago, by Homo habilis is harder to distinguish from background rocks because it is less sophisticated and less obviously crafted to the unskilled observer.

The earliest stone tools in the life span of the genus Homo . . . come from what has been termed the Oldowan Industry, named after the type site (many sites, actually) of Olduvai Gorge in Tanzania where they have been found in very large quantities. Oldowan tools were characterised by their simple construction, predominantly using core forms. These cores were river pebbles, or rocks similar to them, that had been struck by a spherical hammerstone to cause conchoidal fractures removing flakes from one surface, creating an edge and often a sharp tip. The blunt end is the proximal surface; the sharp, the distal. Oldowan is a percussion technology. Grasping the proximal surface, the hominid brought the distal surface down hard on an object he wished to detach or shatter, such as a bone or tuber.

The earliest known Oldowan tools yet found date from 2.6 million years ago, during the Lower Palaeolithic period, and have been uncovered at Gona in Ethiopia. After this date, the Oldowan Industry subsequently spread throughout much of Africa, although archaeologists are currently unsure which Hominan species first developed them, with some speculating that it was Australopithecus garhi, and others believing that it was in fact the more highly evolved Homo habilis. Homo habilis was the hominin who used the tools for most of the Oldowan in Africa, but at about 1.9-1.8 million years ago Homo erectus inherited them. The Industry flourished in southern and eastern Africa between 2.6 and 1.7 million years ago, but was also spread out of Africa and into Eurasia by travelling bands of H. erectus, who took it as far east as Java by 1.8 million years ago and Northern China by 1.6 million years ago.

However, it is not that simple:

In Eastern Asia, H. erectus specimens are associated not with Acheulean tools, but instead with Oldowan tools, which were retained until 200,000 to 300,000 years ago.

This pattern was first pointed out by Hallam Movius in 1948. The line dividing the Old World into Acheulean and non-Acheulean regions became known as the Movius line. Handax cultures flourished to the west and south of the line, but in the east, only choppers and flake tools were found. 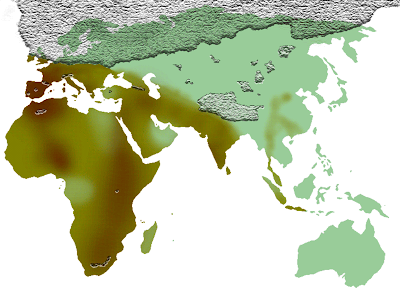 The Movius Line (via Wikipedia)

This provides archaeological continuity for a long time period (1.3-1.4 million years), although not right up to the presumed time period at which modern humans and archaic hominins encounter each other in Asia, but presents its own mysteries. "Why were there no Acheulean handax cultures in the Eastern provinces of Asia?"

Theories that could answer this question include the possibility that it was due to the "quality of raw materials (fine-grained rocks rare)," "different functional requirements (related to environment and food procurement)," or "'bamboo culture' bamboo tools used in place of stone implements to perform tasks."

The early dates of hominin fossils in Java and Dmanisi can help explain the gap, since the "Acheulean developed in Africa from the preceding Oldowan Tradition only after 1.8 Myrs ago, but if people moved into eastern Asia at 1.8 million years ago or before, they would have arrived without Acheulean tools." The fact is suggestive of the absence of Neanderthals or even Western Eurasian Hominins after about 1.5 million years ago from Southeast Asia and East Asia.

Of course, resolution of this question poses yet another question, "what kept Asian hominins separated from West Eurasian, South Asian and African hominins for 1,200,000 years?"

There are examples at least 1-1.5 million years old are found in South Asia, while Homo Erectus fossils are found on the island of Java going back about 1.9 million years. There is also a deep divide genetically between South Asia and Southeast Asia, but it isn't at all clear why Burma, between them, should be so imposing to genetic exchange or cultural exchange between earlier Homo Erectus hominins.

The chronology of the Homo Erectus to Neanderthal transition and of the Neanderthal to modern human transition in Europe and to a slightly lesser extent in Southwest Asia (i.e. the Middle East), is reasonably well established. We also see in the archaeological record a break in archaeological record of Acheulean tools in Africa ca. 600,000 years ago, where they become somewhat more sophisticated, sometimes attributed to Homo heidelbergensis.

But, there is a big gap in time between the youngest definitively non-modern human skeletons in Asia (other than Homo Florensis, the "hobbits" of the island of Flores in Indonesia), and the earliest definitive example of modern humans. Basically, we have a 300,000-400,000 year gap or so between the most recent Homo Erectus skeletons and the earliest arguable modern human skeletons (100,000 years ago), and there is good circumstantial evidence to think that modern humans were not pervasive in Asia until close to 75,000-45,000 years ago in Asia, with the more recent date marking the at which point modern humans reach Papua New Guinea and Australia in a historic moment marked by megafauna extinctions, reasonably well dated modern human skeletal evidence, and a sharp uptick in evidence of vegetation fires.

In the absence of skeletons, which the prevailing temperature and moisture conditions in much of Asia don't help to preserve, the next best things are stone tools, which are much more likely to be preserved and can serve as a proxy for the people who made them. Also, since the first modern humans in Asia would presumably have had post-Mousterian tool kits, which should be in sharp contrast to the Oldowan industry that apparently prevailed there until about 200,000 years ago.

Even looking to stone tools a proxy, we have a gap of at least 100,000 years, in comparison to a European fossil record that shows a gap between stone tool industries associated with Neanderthals and those associated with modern humans that are no more than 1,000 years in some of the better resolved sites with strata containing both kinds of tools. Perhaps this is simply a product of the low density of archaeologists in Asia and will be remedied in coming years.

The presence of Denisovian DNA admixture in modern humans from Papua New Guinea, pre-European Australians and Filipino Negritos suggests that there was some sort of archaic hominin in Southeast Asia with whom they could have admixed before the Denisovians vanished, with the last Denisovian traces found in a South Siberian cave ca. 40,000 years ago, around the same time as the last of the Neanderthals.

But, between the tiny bone from which the Denisovian ancient DNA was extracted (too small and isolated to make much in the way of speculation about even which species they belonged to), and the much, much older most recent Homo Erectus skeletal remains in Asia, we really have nothing in terms of hominin remains to go on. So, we don't know much about the hominins that modern humans encountered when they first arrived in Asia.

Were Denisovians the last of the Homo Erectus, or were they something else entirely? There is no other obvious alternative. But, the direct proof is surprisingly scant.

Also, helpful would be evidence to date megafauna extinctions in Asia, if any (and it is not clear that this event took place in the same kind of way there), but I'm not as familiar with this evidence as I would like to be. But, as a 2007 article on the topic which asserted that there was a megafauna extinction in Southeast Asia explained "the chronological resolution of these extinctions is poor," in contrast with quite clear timelines in Australia and the Americas where there were no prior hominin presences before modern humans. The decline in megafauna there was less dramatic than in Northern Eurasia, Australia and the Americas, however.

Indeed, according to one source (Extinctions in near time: causes, contexts, and consequences By R. D. E. MacPhee (1999) at page 257), while there were pronounced megafauna extinctions in the Americas, Australia and Northern Eurasia, sub-Saharan Africa and Southern Asia "were hardly affected." In the first set of regions "all of the animals of 1000kg (1 metric tonne) or more became extinct. In contrast, all species of 1 tonne or more present in the Late Pleistocene of sub-Saharan Africa and southern Asia survive to the present day." But, more recent researchers have claimed that while current levels of megafauna diversity do go back to the sometime around the Late Pleistocene, that immediately prior to that there was significantly greater megafauna diversity in Southern Asia.

Advanced tools did come relatively late to Europe compared to Africa: "Acheulean methods did not reach the continent until around 400,000 years ago." Indeed, the time frame is closer to the arrival of the Neanderthals in Europe than Homo Erectus.

But still, a co-evolution theory of megafauna extinction doesn't explain why other regions fit this theory while Northern Eurasia did not. One needs to twist the theory, perhaps with a co-evolution plus additional vulnerability to advanced hominin predators as a result of living in an ecologically margial region where it took "hunting plus" to dispatch these co-evolved large animals to fit Northern Eurasia into the rubric.

One could also argue that modern humans, at least, although this is less clear of their predecessor species, may have been adapted to savannah and open plain environments and used fire strategically in a way that produced extinctions, something not possible in Southern Asia that was too moist for mass wildfires and to heavily wooded to give modern humans a decisive advantage. Evidence from leg bone length relative to the rest of their bodies that Neanderthals may have been particularly adapted to steep terrains could also help explain why there was less co-evolution of Northern Eurasian megafauna with hominins than there was elsewhere, even if Neanderthals could handle more cold than previously believed. Perhaps it is much harder to take down an elephant or other large mammal with primative tools in small groups on open ground than it is in hills and mountains, and so Neanderthals adapted themselves to places where they could more effectively take down their big game quarry. (But note that 125,000 years ago, Neanderthals were apparently dining on shellfish in England.)

This could also explain why Neanderthals apparently didn't extend their range very far into Northern Eurasia, and it is quite possible that Asian Homo Erectus, unlike Neanderthals, never evolved to survive Northern Eurasia's close weather and never ventured much further north than the Denisovians (perhaps pushed to this clime by population pressures from modern humans) ever did.
Posted 4:20 PM
Email ThisBlogThis!Share to TwitterShare to FacebookShare to Pinterest
Labels: culture, evolution, history, South Asia, technology

Otherwise I agree: Acheulean is probably associated with H. ergaster, the African cousin of Asian H. erectus and the common ancestor of Neanderthals and us.

Thanks for the typo tip. I would never survive in my professional life without a copy editor but alas, I can't seem to find one for my blogs.

I'm pretty sure that I've actually been to Saint-Achuel but was oblivious to the comune name at the time.

The "Archeulean" typo is still in the text: twice - I'd suggest using the search feature (ctrl-F in Firefox).

Firefox and other text applications also have embedded dictionaries, which I find most useful. It's likely that something like Acheulean is not in the list however. In these cases I check Wikipedia or Wikitionary.