Lower Bounds On Masses Of Hypothetical Stuff From LHC 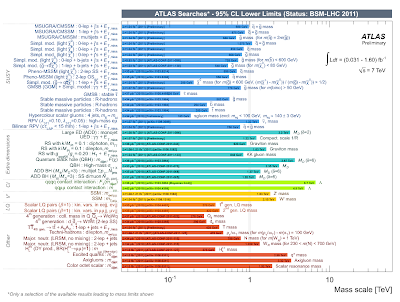 The Large Hadron Collider has found no new physics with the possible exception of the OPERA finding regarding high energy neutrino velocity that was recently announced. But, it has greatly constrained beyond the Standard Model physics proposals. The CERN blog has posted the chart above showing the mass-energy ranges that have been ruled out for various hypothetical particles and extra dimensional effects.

The dark blue lines in the SUSY block refer to particles predicted by supersymmetry and supergravity theories. The limits allow a stable superpartner of a tau (i.e. third generation electron) as light as 36 GeV (the tau itself is about 1.77 GeV) and gluinos are constrained to be a few GeV heavier than the top quark mass of 173-174 GeV. Most other supersymmetric particles and supersymmetric hadrons are constrained to be two to nine times the top quark mass. Most of these limits are theory specific to minimal versions of supersymmetry and supergravity.

The blue-green bars refer to evidence of extra dimensions, a universal prediction of string theories aka M theory (and the closely related "F theory"). Some of these involve the mass of a hypothetical Randall-Sundrum graviton in a model where fermions and other bosons are bound to a four dimensional universe, but gravitons have a fifth dimension in which they can travel. Phenomenological predictions of various extra dimensional models are absent in interactions of up to about 840 GeV to 3,670 GeV depending on the model in question. Proposals for extra dimensions are mostly motivated by a desire to explain why gravity is so much weaker than the weak force or other Standard Model forces if one hopes to described them a different manifestations of some underlying fundamentally unified theoretical structure.

The green bars refer to a four fermion Fermi contact interactions which would be short range magnetic interactions between fundamental particles bound into atomic nuclei or other composite structures, involving four quarks or two quarks and two muons, originally proposed by Enrico Fermi in 1930 as a possible explanation of beta decay are now seen as a potential place to look for "new physics" such as composite quarks or leptons but are ruled out at high energies. A 2008 paper using multiple data sets conducting different kinds of searches for four fermion contact interactions concluded that "the global data have been examined and do not support the existence of eeqq contact interactions with the compositeness scale up to 8-15 TeV. Although the 1994-97 the NC DIS [Neutral Current Deep Inelastic Scattering] data at HERA favor a slightly non-zero contact interaction, the other data, especially the Drell-yan data at the Tevatron and the atomic parity violation measurement, severely constrain it." Basically, four-fermion contact interactions would be a hallmark of preon models and are strongly disfavored at anything but the highest energy scales. To put the claim more modestly, if preons exist, they are very, very small and very, very tightly bound (much more strongly than the strong force which confines quarks into hadrons).

The orange LQ bars refer to leptoquarks, massive bosons which would regulate quark-lepton interactions in the same generation that arise in technicolor theories. Technicolor theories are a Higgsless way to generate mass for Standard Model fermions through an additional strong force-like interaction involving additional "technifermions."

Excited quarks and four fermion contact interactions, two of the main experimental tests for the existence of preons, are ruled out at some of the highest energy levels (about 3 TeV and up).

The results clearly rule out of anything at the KeV mass-energy scale, which is where warm dark matter theorists think a dark matter particle belongs. This is roughly halfway between the mass of an electron and the mass of an electron neutrino on a logarithmic scale. While this isn't an absolute death knell for something like a sterile neutrino, since LHC is only sensitive to strong force, weak force and electromagnetic interactions, none of which would interact with sterile neutrinos (which lack color charge and electromagnetic charges and are right handed so they don't interact with the weak force either), it greatly narrows the dark matter parameter space.
Posted 9:08 AM
Email ThisBlogThis!Share to TwitterShare to FacebookShare to Pinterest
Labels: physics