About Pluto And Other Dwarf Planets And Satellite Planets

In honor of the New Horizon's flyby of Pluto and Charon, I am discussing the subject of the bodies found in our solar system and Pluto in particular. 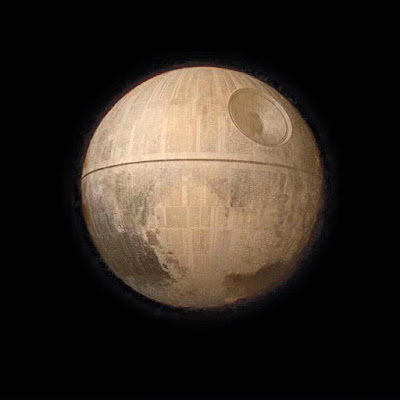 If high resolution photos of Pluto look like this, we're really in trouble.

In addition to providing the most close up pictures ever of Pluto and Charon, the New Horizon space probe which took nine and a half years to arrive, has allowed us to discern the topography of Pluto and Charon. For example, the tallest mountain on Pluto is about 11,000 feet, several thousand fee less than the tallest mountain in Colorado. It also appears that Pluto's atmosphere is leaking nitrogen gas, some of which is ending up in Charon's gravitational hold.

I made a number of posts at sister blog Wash Park Prophet, before this blog was established, that are related to the dwarf planet and Pluton called Pluto.  I link to them here.

One post reviewed the new IAU definitions that demoted Pluto from its status among the classical planets and examined the various bodies that come close to meeting the definition of a dwarf planet, which is formally defined as smaller the Mercury which has a diameter of 4879.4 +/- 1 km and is the smallest of the "classical planets" which have an unchanging rank order of distance from the sun and are observable with the naked eye or very weak magnification from Earth.  Another post shortly thereafter located the exact text of the new resolution and engaged in some meta commentary on the discovery.  A post in 2007 reported on a stupid New Mexico law that attempted to defy the IAU definition of Pluto.

Another post in 2007 listed the largest objects in the solar system by diameter (from the Sun to Orcus) including Moons, and reported that Eris was larger than Pluto, something that is true when measured by mass, but which new measurements have shown is not true measured by diameter.  A post in June of 2008 distinguished between Plutoids and the four other large objects in the solar system in the main asteroid belt that are not Plutoids.

A post in 2008, almost exactly seven years ago, reported on the formal naming of Makemake (formerly known as Easter Bunny).

The Terrestrial and Giant Planets

Within the eight "classical planets", four are "terrestrial" (Mercury, Venus, Earth, Mars), all of which are within the main asteroid belt of the solar system, and four are "giants" (Jupiter, Saturn, Uranus and Neptune) which happen to be outside the main asteroid belt of the solar system, are much larger, and have a proportionally much greater fluid makeup relative to solid makeup than the terrestrial planets.  Mercury, Venus, Earth, Mars, Jupiter and Saturn have been known since ancient times and can be seen with the naked eye on Earth (although it was not clear until the 1500s that Earth was a planet like the others that rotated around the Sun, and that Earth's moon was not a planet).

Uranus was first observed in 128 BC, and was observed but not accurately classified numerous times by independent astronomers from 1690-1783, when it was correctly described as a planet. Neptune was discovered in 1846.

To be a planet at all, a body must be approximately round due to gravitational effects which imposes a floor diameter of approximately 650 km to 800 km (with close cases resolved by inspection of whether it is round or not), in addition to not being a moon, or a star (the least massive of which is a brown dwarf with a minimum diameter of about 600,000 km).  Thus, dwarf planets have diameters (by definition) from about 650 km to 4879 km, and in practice from 650 km to perhaps 2600 km (assuming that there might be a few Plutons in distant solar orbit a bit bigger than Pluto that are not yet discovered).

An inner dwarf planet and three near misses

One of them, Ceres, and three near asteroids that aren't quite round enough to qualify as planets are in the main asteroid belt and were discovered in the 19th century.

The remaining dwarf planet candidates (except Eris, 2007 OR10 and Sedna which are further out from the Sun) are Kuniper Belt Objects with orbits around the sun of 200 years or more (aka Plutons), the largest of which is Pluto, which was first discovered in 1930 before any of the rest. A classical Kuniper Belt object that aren't quite large enough to be classified as dwarf planets are sometimes called a cubewano (after the type specimen 1992QB1) or, depending upon its orbit, a plutino.

In addition to Ceres, the four other officially recognized dwarf planets, also known as Plutons, are (in order of largest dimension of size):

Eris is the most distant from the sun of these, about 60% further out than Pluto.

Another dozen strong dwarf planet candidates in order of size include:

Beyond these there are probably about a dozen additional solar system bodies without names that are serious dwarf planet candidates.

Sedna is the largest body not yet officially recognized as a dwarf planet, and is also about seven and a half times as far from the Sun as Eris.

Other than Sedna, there are only four known objects significantly further out than Eris in the solar system, and only one is further out than Sedna.  The sizes and shapes of these four objects aren't known with great certainty. Current estimates putting them on the borderline of qualification as dwarf planets.

Many of the 21st century discoveries were made by Mike Brown whose blog is in the sidebar. Another leading astronomer in this field is Gonzalo Tancredi.

The discovery of these new Plutons or near Plutons in 2000-2005 is what prompted the reclassification of Pluto from classical planet status to a dwarf planet and Pluton.  It is estimated that there may be as many as a couple dozen Plutons in the solar system, some as large as or even a bit larger than Pluto, most of which have not yet been discovered.

Charon 1207 +/- 3 km diameter as of July 2015 is part of the same system of Pluto. Since Pluto is larger than Charon, Charon is currently officially classified by the IAU as a moon of Pluto under the existing definition, which disqualifies it from planet status. There are also four other moons in the Pluto-Charon system: Styx, Nix, Kerberos, and Hydra.

The IAU has proposed to classify Pluto and Charon as a double planet (with both Pluto and Charon having dwarf planet status) because the center of their rotation around each other is not within either planet. This would make it the only double planet system in the solar system. But, one analogy that discourages IAU members from adopting the double planet definition, is that the same definition would conclude that Jupiter is not a satellite of the Sun, but is instead as "double" object with it, since their center of gravity is no within either body due to Jupiter's great distance from the Sun.

Charon is not the only big planet-like moon in the solar system, sometimes called satellite planets:


Nineteen moons are known to be massive enough to have relaxed into a rounded shape under their own gravity, and seven of them are more massive than either Eris or Pluto. They are not physically distinct from the dwarf planets, but are not dwarf planets because they do not directly orbit the Sun.

The seven that are more massive than Eris are the Moon, the four Galilean moons of Jupiter (Io, Europa, Ganymede, and Callisto), one moon of Saturn (Titan), and one moon of Neptune (Triton).

The others are six moons of Saturn (Mimas, Enceladus, Tethys, Dione, Rhea, and Iapetus), five moons of Uranus (Miranda, Ariel, Umbriel, Titania, and Oberon), and one moon of Pluto (Charon).

The term planemo ("planetary-mass object") covers both dwarf planets and such moons, as well as planets. Alan Stern calls them "satellite planets". 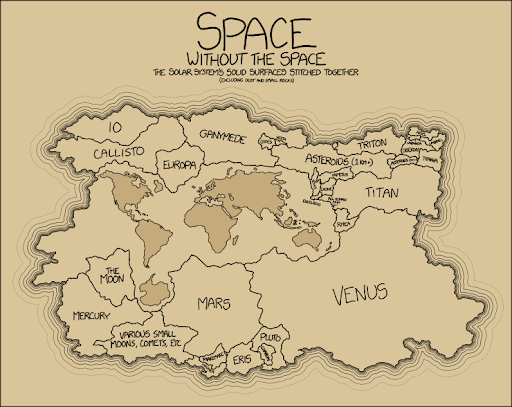 While the solar system is a big place, there is surprisingly little solid ground on the surface of planets, dwarf planets or other known solar system objects, as illustrated nicely in the xkcd illustration above which I blogged about a little more than a year ago.

The vast majority of the mass of the solar system is in the Sun and its four giant planets, but none of those are suitable for standing on or building upon.  If one were to remove Venus, which is too hostile an environment to stand upon or build upon for any reasonable length of time, the Earth makes up a very large portion of the total amount of real estate in the solar system indeed.

There are lots of little islands of land in the solar system, but they are all much smaller than Earth in terms of surface area.  Pluto, for example, which is the largest of the dwarf planets, has roughly the same amount of surface area as Australia, and Ceres is roughly five times smaller in surface area.

All of these little islands, moreover, are much less inviting for human habitation, a point I made in one of the very first blog posts at Wash Park Prophet.  Much of that real estate is also very deep in space compared to the Moon and Mars, which are the most plausible places for human colonization outside Earth, making these places difficult and time consuming to travel to, hard to conduct trade with, and ill supplied with light from the Sun for solar power compared to closer in locations.

Mass In The Solar System

The moons of planets, dwarf planets, asteroids, other meteroids and space dust (some of which are discussed in this post at length), combined, account for something on the order of 0.005% or less of the mass in the solar system (i.e. about two parts per million) combined, of which moons, dwarf planets, and the three large asteroids in the main asteroid belt of the solar system account for a very significant share of this remainder.

Individual comets have a modest mass. The mass of Earth's moon, for example, is about 200,000,000 times the mass of Halley's Comet, for example. But, there are probably a lot of them out there.

A gravitational model of the solar system that ignores everything but the Sun is quite accurate.  One that incorporates the four gas giants and their moons as four point sources, is considerably more accurate, despite modeling only five objects in addition to the target whose dynamics are to be inferred.

A model that includes one hundred point sources based upon the best available data (for example, the Sun, all of the planets, all of the dwarf planets, all of the known moons of planets, each major asteroid family, and a couple dozen of the biggest comets or clusters of comets) would have exquisite precision (particularly if non-Newtonian gravitational physics were approximated), although finding enough computing power for chaotic dynamics to not overwhelm the calculation could be difficult.

Dark Matter In The Solar System

How Did The Solar System Get This Way?

A new (and short) preprint offers a nice skeletal outline of the forces that shaped the dynamic history of the solar system over the last 4.5 billion years.  The analysis can be summed up as the natural implications of chaotic gravitational dynamics on what was originally a fairly homogeneous disk of matter around the Sun.
Posted 9:00 AM
Email ThisBlogThis!Share to TwitterShare to FacebookShare to Pinterest
Labels: astronomy, dark matter, history, humor, intellectual history, Pluto, science, technology, war on science