The Incredible Correspondence Archive Of Kanesh

We know a lot about Kanesh, in what is now south central Turkey, which from 1890 BCE to 1860 BCE was a thriving trade colony of Mesopotamian merchants from the city-state of Assur in what is now Iraq. 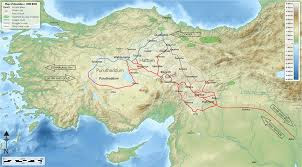 The trade routes between Mesopotamia and Kanesh via the Journal Antiquity.

This is because they used cuniform imprints on clay tablets that preserve very well over time and are quite simple to decode because cuniform is a phonetic alphabet rather than an ideogram system (like the symbol based proto-language of seals that preceded it in cultures from the Vinca culture in the Balkans, to Egypt, to Mesopotamia in modern Iraq, to the Harappan culture in the general vicinity of modern Pakistan).

These records from Kanesh provide some of the most insightful information about the early days of the Hittite empire, because this empire originated in the immediate vicinity of Kanesh in a process retold by these Iraqi traders.  The Hittite people ruled just two cities at that time.

A comprehensive treatment of the very early historical treasure trove will be recounted in a new book by Morgens Trole Larsen called Ancient Kanesh to be published by the Cambridge University Press later this year.

These communications, which were mostly trade related after all, also provide a wealth of economic information from prehistory that an August 27, 2015 article in the New York Times summarizes.  The bottom line of this analysis is that the economic system in place almost 4,000 years ago was very similar in many respects to our own economy.


[Earlier this year] Gojko Barjamovic, of Harvard . . . joined some economists, as well as some other Assyriologists and archaeologists, on a team that analyzed Kanesh’s financial statistics. The picture that emerged of economic life is staggeringly advanced. The traders of Kanesh used financial tools that were remarkably similar to checks, bonds and joint-stock companies. They had something like venture-capital firms that created diversified portfolios of risky trades. And they even had structured financial products: People would buy outstanding debt, sell it to others and use it as collateral to finance new businesses. . . .

It’s impossible not to see parallels with our own recent past. Over the 30 years covered by the archive, we see an economy built on trade in actual goods — silver, tin, textiles — transform into an economy built on financial speculation, fueling a bubble that then pops. After the financial collapse, there is a period of incessant lawsuits, as a central government in Assur desperately tries to come up with new regulations and ways of holding wrongdoers accountable (though there never seems to be agreement on who the wrongdoers are, exactly). The entire trading system enters a deep recession lasting more than a decade. The traders eventually adopt simpler, more stringent rules, and trade grows again.

In 1962 A.D., as our modern era of globalization was just beginning, the economist Jan Tinbergen — who would later share the first Nobel in economic science — noted something curious: Trade within and between countries followed a mathematical formula. He called it the Gravity Model, sort of an E=mc2 for global business. It comes with an imposing formula: Fij = G(Mi x Mj)/Dij. Which, simplified, means that trade between two markets will equal the size of the two markets multiplied together and then divided by their distance. (The model gets its name from its mathematical similarity to the equation in physics that describes gravitational pull.) . . .

Economists were drawn to the Kanesh archive because it offered an unprecedented chance to see how well the Gravity Model applied in an economy entirely unlike our own. This was trade conducted via donkey, through a land of independent city-states whose legal and cultural systems were totally dissimilar to any we know. But still, the model held up: Ali Hortacsu, a University of Chicago economist on the Kanesh team, says that the trade figures between Assur and Kanesh matched the formula almost perfectly. ‘‘It was a very nice surprise,’’ he told me.

Another business dispute between a trader who entrusted his goods with another trader going the same way who then breached the contract could have come right out of my conference room as I listen to a client describing a new case (except for the nature of the goods traded and the fact that they were being delivered via donkey train).

The results are encouraging to those who see the laws of economics as being "natural" subject to some rather weak conditions, in much the same way that common law judge made rules are described as "discovered" rather than made, as opposed to being purely "positivist" creations of decision makers writing the rules out of whole cloth.

I was also struck by the Times magazine article - but even more by the complete lack of references to more complete information. Searches on the archaeologists and economists mentioned in the article don't produce information on the "team that analyzed Kanesh's financial statistics". So we have no proof that the Adam Davidson article is not the usual overhyping and oversimplification of far-more nuanced academic findings.

In the Tinbergen formula, what are the units of measurement?

In the Tinbergen formula is the distance physical (50 km), temporal (5 days) or economic (costs 2 talens to move 5 tons)?

It is worth noting that the Newtonian gravity formula has a distance squared term in the denominator as a function of the fact that space is three dimensional. In a two dimensional world, which is effectively what trade on Earth's surface involves, the denominator would be 1/r, just as in the trade equation.

The distance in Tinbergen's formula is either physical (as measured by passable trade route, not as the crow flies) or temporal, it is not economic.