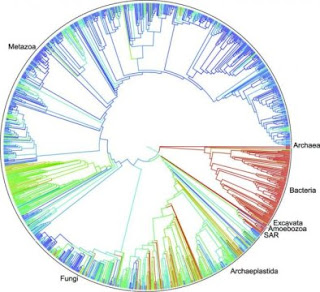 Above is a visualization of the entire tree of life for all species on Earth in a single image.


A first draft of the tree of life for all 2.3 million named species of animals, plants, fungi and microbes has been released. Thousands of smaller trees have been published over the years for select branches, but this is the first time those results have been combined into a single tree. The end result is a digital resource that is available online for anyone to use or edit, much like a 'Wikipedia' for evolutionary relationships.

From here.  There is also a PNAS paper announcing the draft and discussing how issues like conflicting opinions regarding taxonomy are addressed.

This is one of those "wicked" problems that can only be solved once after which there remains plenty to be done in biology and taxonomy, but no future research ever will fundamentally change the overall structure once it research a fully up to date draft version.

It isn't entirely clear from the press release how horizontal gene transfers and hybrids are described, since not all of evolution is tree-like.  The initial draft is based upon 500 pre-existing sub-trees that have already been published.  Also, there have long been comprehensive trees of life that don't go all of the way down to the level of detail of specific species, but do include all of the top several levels of taxonomic classification (traditionally, Kingdom/Domain, Phylum, Class, Order, Family, Genus, Species, Subspecies/Race/Breed).  The modern trend is to identify "clades" without worrying about exactly which level of classification is represented by a clade.  For example, a dispute over whether a clade above the species level should be a "class" or an "order" is largely considered anachronistic.

The first draft includes some trees that are known to be outdated but are easily uploaded as a stop gap measure until better publications that are less easily translated into digital form are incorporated.
Posted 2:31 PM
Email ThisBlogThis!Share to TwitterShare to FacebookShare to Pinterest
Labels: biodiversity, evolution