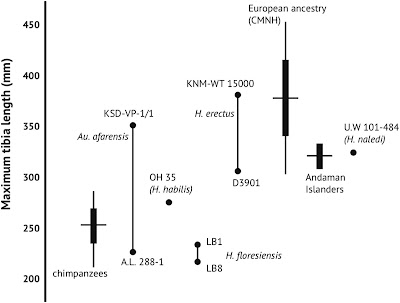 Overall, they are similar in size to shorter modern humans. 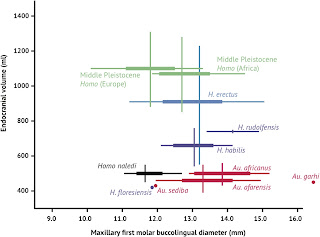 This species has teeth similar in size to modern humans, but much smaller brains.

The long awaited results of a major fossil find in South Africa are out.  They discovered a new extinct species from the genus Homo, a genus that also includes modern humans. In classic evolutionary fashion, it is a transitional species with both modern and archaic features.


Homo naledi is a previously-unknown species of extinct hominin discovered within the Dinaledi Chamber of the Rising Star cave system, Cradle of Humankind, South Africa. This species is characterized by body mass and stature similar to small-bodied human populations but a small endocranial volume similar to australopiths. Cranial morphology of H. naledi is unique, but most similar to early Homo species including Homo erectus, Homo habilis or Homo rudolfensis. While primitive, the dentition is generally small and simple in occlusal morphology. H. naledi has humanlike manipulatory adaptations of the hand and wrist. It also exhibits a humanlike foot and lower limb. These humanlike aspects are contrasted in the postcrania with a more primitive or australopith-like trunk, shoulder, pelvis and proximal femur. Representing at least 15 individuals with most skeletal elements repeated multiple times, this is the largest assemblage of a single species of hominins yet discovered in Africa.

National Geographic which provided some of the funding for the expedition tells the story in a way directed at a more general audience.

Incidentally, in an unfortunate development, National Geographic which has since the year 1888 been the flagship publication of a leading non-profit publisher of geographic inquiry, was converted yesterday into a for profit venture owned 73% by 21st Century Fox, part of Rupert Murdoch's media empire which also includes conservative Fox News outlet, in exchange for $725 million.  It is not obvious that conservative political activist Rupert Murdoch, who also owns one of the most anti-science and anti-geography news sources on the planet, will be a good steward of the fabled and highly credible National Geographic brand that was developed while it was a science first non-profit.

The economics driving the deal, however, are obvious.  Circulation of National Geographic which reached 12 million in the 1980s, has fallen to 3.5 million in the U.S. and 3 million in non-English language editions, and advertising revenues have plunged.

The partnership was in some ways obvious.  Fox has run the National Geographic cable channels since 1997, which together with some smaller affiliated TV channels produce $400 million a year of profit for the joint venture (it isn't clear what part of that take goes to the National Geographic Society whose endowment now exceeds $1 billion as a result of this deal).  But, National Geographic journalists dread the future under the new management and aren't pleased with what some of the content on the TV channels suggests about the future of the magazine.  Imminent cost cutting initiatives under the new venture also have magazine employees and freelancers worried.
Posted 7:05 PM
Email ThisBlogThis!Share to TwitterShare to FacebookShare to Pinterest
Labels: evolution, media

Naledi's journey to mid-earth to die was
a religious belief=b/v/uelie/f/p/b/v/u=
iueli(N/adv.)=powerful, and that belief existed before man, waiting for his use
when he arrived.

Fox/NatlGeo? NatlGeo botched Otzi, Tyrol man, and were huffy about it. they certainly don't belong at the front of Anthropology, in fact
do damage in their haste, leaning too heavily on Science at the wrong times, especially
when all evidence points to sacrifice and
not murder most foul, e.g., Otzi had 2 sacrificial animal meals in his stomach,
prime red deer and mountain goat=serve seven=
Maza(OHG)=meat=Mazatl(N/7/Tonalamatl)=cerf=
ce(N)=one ofrenda/rf/p/b/v/uentli(N)=offering
=ciervo(Sp)=chevre(F)=hirvi=Finn/fen/Fennec
Uenic=uentli ce(N)=ofrenda one.