The authors of the paper claiming that NGC1052-DF2 and NGC1052-DF4 have little or no dark matter phenomena make a strong case that a potential flaw in their analysis is without merit.

It has been suggested that the dark matter-deficient galaxies NGC1052-DF2 and NGC1052-DF4 might not be members of the NGC1052 group but in the foreground at ∼13 Mpc, and satellites of the bright spiral galaxy NGC1042. We previously showed that the CMDs of the galaxies are inconsistent with this hypothesis, and derived distances of 19-20 Mpc from their surface brightness fluctuation signals. Here we note that NGC1042 is almost certainly a member of the NGC1052 group as well, based on its radial velocity, the HI distribution in the NGC1052/NGC1042 system, and the Tully-Fisher relation.

Pieter van Dokkum, Shany Danieli, Aaron Romanowsky, Roberto Abraham, Charlie Conroy, "The distance to NGC1042 in the context of its proposed association with the dark matter-deficient galaxies NGC1052-DF2 and NGC1052-DF4" (February 5, 2019) (To appear in RNAAS).

The following paper is also a notable observation of an outlier galaxy that seems to be contrary to MOND and the Radial Acceleration Relation (and every other modified gravity theory that reproduces the RAR) and is also an extreme outlier with respect to the less ironclad expectations of ΛCDM theory (in the vicinity of five sigma discovery significance).

Generally speaking, elliptical galaxies have apparent low dark matter to total mass ratios. Because it is such an extraordinary and singular outlier a first instinct is to look for possible methodological flaws. But, if there aren't any, it is an extremely significant development (far more so than the claimed bullet cluster issues for modified gravity theories). The possibility that "a hydrostatic equilibrium analysis of the luminous and relaxed X-ray plasma emission" is misleading in this case, perhaps because the system in not in equilibrium, or because the luminous and X-ray plasma emissions are atypical for reasons related to the mix of stars in the galaxy for some reason come immediately to mind as possible explanations. Another possibility is that the new and archival observations have some inconsistency that hasn't been properly considered.

Compact elliptical galaxies (CEGs) are candidates for local analogs of the high-redshift "red nuggets" thought to represent the progenitors of today's early-type galaxies (ETGs). To address whether the structure of the dark matter (DM) halo in a CEG also reflects the extremely quiescent and isolated evolution of its stars, we use a new  ks Chandra observation together with a shallow  ks archival observation of the CEG Mrk 1216 to perform a hydrostatic equilibrium analysis of the luminous and relaxed X-ray plasma emission extending out to a radius . We examine several DM model profiles and in every case obtain a halo concentration  that is a large positive outlier in the theoretical CDM  relation; i.e., ranging from above the median CDM relation in terms of the intrinsic scatter. The high value of  we measure implies an unusually early formation time that firmly establishes the relic nature of the DM halo in Mrk 1216. The highly concentrated DM halo leads to a higher DM fraction and smaller total mass slope at compared to nearby normal ETGs. In addition, the highly concentrated total mass profile of Mrk 1216 cannot be described by MOND without adding DM, and it deviates substantially from the Radial Acceleration Relation. Mrk 1216 contains  of the cosmic baryon fraction within . The radial profile of the ratio of cooling time to free-fall time varies within a narrow range  over a large central region ( kpc) suggesting "precipitation-regulated AGN feedback" for a multiphase plasma, though presently there is little evidence for cool gas in Mrk 1216. The properties of Mrk 1216 are remarkably similar to those of the nearby fossil group NGC 6482.

This image is from that paper: 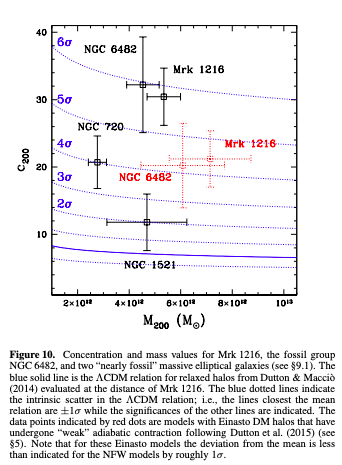 Footnote: For future reference I'm noting the paper below, primarily as a reference which the mass ranges of low, intermediate and high mass satellite galaxies.

how would you summarize what these papers mean for mond and dark matter?

The second paper is the big deal. It either blows everything we know from all of the theories out of the water, or the measurement is mistaken.

could the second paper be explained in terms of MOND + black holes as dark matter?

Not easily. The problem is that every other elliptical galaxy ever seen has proportionately much less apparent dark matter and there is really no good reason why this one is special.

The authors suggest that it may have something to do with the galaxy being extremely old compared to others of its type. But, honestly, this itself seems like their grasping at straws.

in galaxy clusters, MOND reduces the amount of dark matter needed by a factor of 5, though i can't comment on elliptical galaxy

MOND predicts very little dark matter phenomena in elliptical galaxies because almost all of their stars are in gravitational fields stronger than a0. Conformal gravity does the same thing, more or less, but the way it makes it out of the equations to the phenomenology is subtly different from MOND.

Deur predicted and confirmed in his analysis that the more spherically symmetric an elliptical galaxy is the less apparent dark matter it should have, which indeed turns out to be consistent with observation, and that dark matter effects are much stronger in clusters than in spiral galaxies because self-interacting gravitons in weak fields form an astronomy scale analog to QCD flux tubes between large point masses.

In lambdaCDM the amount of dark matter in an elliptical galaxy is also predicted to be very low through a rather more baroque process of accretion of material into galaxies.

Using Occam's Razor, when every independent theory predicting apparent DM amounts in elliptical galaxies the simplest explanation for the observations would be measurement error.

The author argues that the anomalies arise from this system being very, very old to the point of being primordial. But, this explanation from the author only raised more and more complex to measure questions.

Two of the more plausible ways that this could happen would be:

(2) the old data and the new data haven't been properly compared to each other (the comparison is how you know how faster movement is taking place) and if it has been calibrated properly the stars in the new observation would be closer in location to those of the old measurement causing an illusion of high km/hr measurements which artificially inflates the inferred mass of the system.

Of course, it could e something els entirely as well.

Stacy McGaugh states at his blog regarding to my inquiry:

"Thanks for pointing this out. I have not yet had time to read it closely. In general, claims of high dark matter content in elliptical galaxies are highly degenerate with the adopted mass-to-light ratio of the stars, and it is difficult to disentangle what mass is dark and what is light. I will have to read the paper before I can comment on this particular case."