Where Did Vedic Culture Come From?

This is a fascinating hypothesis that doesn't seem immediately implausible, although without downloading it onto a Kindle (at about 10% of the cost of the hard cover edition) and reading it, I'm not in a good position to evaluate how solid its arguments are and how well they are supported by the evidence. If anyone has access to a more in depth review or journal articles by the same author on this topic, I'd love to see them.

The primary difficulty of discussing the ancient history of India lies in the necessity of first demolishing several well-established inaccuracies, such as the Aryan Invasion Theory, for instance. Spun by white men and broadcast by colonial historians, this old wives’ tale is still taught in schools and colleges, with half of any written work – measured in terms of paper, ink and effort - being expended on it. We shall not entertain it.

Either Kochhar or the author of the discussion (it isn't entirely clear to whom this analysis should be credited based upon the way the piece is written), makes a textual case that two different parts of the epic, the Ramayana and the Mahabharata involve two different places, contrary to conventional wisdom: the Mahabharata near the modern Ganges River of India is described in the later epic texts, and the Ramayana somewhere else that was the location which the earlier Rig Vedic texts describe.


Kochhar argues that ephedra is the "soma" of the Rig Vedas (a popular, but not unanimous view see also here; some scholars argue that it is another plant, while others argue that it was a mixture of ephedra and another plant) that points to a central Asian place of composition because that is where that plant, which does not grow in India, is found. Instead, it is found  found in Afghanistan, Iran, the northern Himalayas, and the Hindu Kush.

This little tidbit of evidence is intriguing (emphasis added):

There are 49 cosmic hymns in the Rig and the Yajur Vedas whose meanings have not been explained. But one particular hymn from Vedanga Jyotish informs us that the longest day of the year, or summer solstice, comprised 18 periods of daylight and 12 of night. Day and night are of equal length on the Equator; in the higher latitudes, summer days are longer than nights.

The latitude at which the proportion of daylight and darkness is 3:2 is 34 degrees North. It is worth noting that the cities to be found around this latitude today are Herat and Kabul in Afghanistan. In other words, the place and time of the composition of the Vedanga Jyotish is the same as that of Vedic Afghanistan and Iran. This second piece of evidence offered by Rajesh Kochhar further strengthens the perception of the location and time of the Rig Veda.

Based upon textual information and geography Kochhar identifies the Sarayu river of the epics with:


the 650-km river known as the Hari-Rud in Afghanistan, whose source is in the Hindu Kush mountains. It flows past the city of Herat and then for 100 km along the Iran-Afghanistan border before disappearing in the Karakom desert of Central Asia.

Kochhar identifies another major river of the epics, the Sarasvati river, with a different river than the Ghaggar-Hakra River in India proper that it is often claimed to be:

In the Avesta we find the Saraswati as the Harahaiti – the similarity in sound is noticeable – which enters Iran along the combined basin of the river Arghandar on the Afghan-Iran border and the river Helmand. According to Kochhar, it is this Helmand that is the Vedic Saraswati river.

The source of the Helmand is in the Koh-i-Baba mountain range. Flowing for 1,300 miles through the heart of Afghanistan, the Vedic Saraswati joins the Vedic Drijadbati or Arghandar. The Avesta identifies this wide river as the Hetumanta (or, in varations, as Setumanta). In Iran the Saraswati is named the Harahaiti, which flows into the inland lake Hamun-e-Sabari in the Saistan area of northern Iran.

Wikipedia further elaborates Kochhar's position on this issue which is actually a bit more complex than the discussion I linked to suggested (emphasis added):


Rajesh Kocchar, after a detailed analysis of the Vedic texts and geological environments of the rivers, concludes that there are two Sarasvati rivers mentioned in the Rigveda. The early Rigvedic Sarasvati, which he calls Naditama Sarasvati, is described in suktas 2.41, 7.36 etc. of the family books of the Rigveda, and drains into a samudra. The description of the Naditama Sarasvati in the Rigveda matches the physical features of the Helmand Riverin Afghanistan, more precisely its tributary the Harut River, whose older name was Haraxvatī in Avestan.

The later Rigvedic Sarasvati, which he calls Vinasana Sarasvati, is described in the Rigvedic Nadistuti sukta (10.75), which was composed centuries later, after an eastward migration of the bearers of the Rigvedic culture to the western Gangetic plain some 600 km to the east. The Sarasvati by this time had become a mythical "disappeared" river, and the name was transferred to the Ghaggar which disappeared in the desert. The later Rigvedic Sarasvati is only in the post-Rig Vedic Brahmanas said to disappear in the sands. According to Kocchar the Ganga and Yamuna were small streams in the vicinity of the Harut River. When the Vedic people moved east into Punjab, they named the new rivers they encountered after the old rivers they knew from Helmand, and the Vinasana Sarasvati may correspond with the Ghaggar-Hakra river. 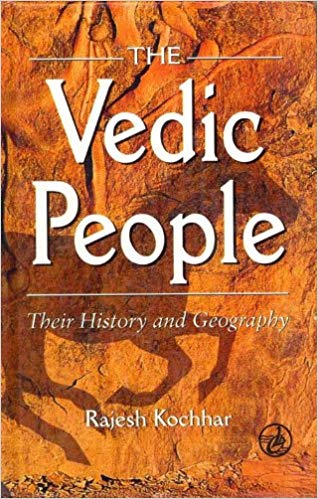 In The Vedic People, well-known astro-physicist Rajesh Kochhar provides answers to some quintessential questions of ancient Indian history. Drawing upon and synthesizing data from a wide variety of fields — linguistics and literature, natural history, archaeology, history of technology, geomorphology and astronomy — Kochhar presents a bold hypotheses by which he seeks to resolve several paradoxes that have plagued the professional historian and archaeologist alike. . . .

This book argues that a major part of the Rgveda was composed in south Afghanistan (after c.1700 BC) before the Rgvedic people entered the Punjab plain and well before they moved east of the Ganga River. The author asserts that during their migrations the Indo-Aryans not only carried with them their rituals and hymns but also place and river names which they selectively reused.