The Dispersion Of Megalithic Culture

Megalithic grave culture did spread rapidly by maritime routes as older archaeologists reasoned. But, the phenomena originated in Northwest France, not the Near East. And, this spread reflects seafaring technologies in pre-Bell Beaker Neolithic peoples that were far more sophisticated than has been generally recognized until now.

The geography also shows a strong geographic overlap with maritime Bell Beaker expansion that started about two thousand years after the megalithic culture's expansion. This suggests that perhaps the Bell Beaker phenomena may be best understood as a fusion of steppe culture with a foundation established in the megalithic era. In this context, the Bell Beaker re-appropriation of sites like Stonehenge for their own use seems like something deeper than a mere random act of monumental recycling. 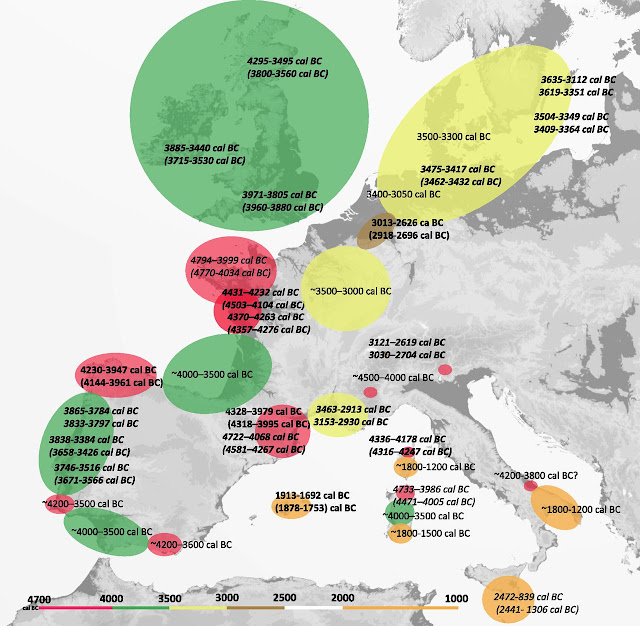 There are two competing hypotheses for the origin of megaliths in Europe. The conventional view from the late 19th and early 20th centuries was of a single-source diffusion of megaliths in Europe from the Near East through the Mediterranean and along the Atlantic coast. Following early radiocarbon dating in the 1970s, an alternative hypothesis arose of regional independent developments in Europe. This model has dominated megalith research until today. We applied a Bayesian statistical approach to 2,410 currently available radiocarbon results from megalithic, partly premegalithic, and contemporaneous nonmegalithic contexts in Europe to resolve this long-standing debate. The radiocarbon results suggest that megalithic graves emerged within a brief time interval of 200 y to 300 y in the second half of the fifth millennium calibrated years BC in northwest France, the Mediterranean, and the Atlantic coast of Iberia. We found decisive support for the spread of megaliths along the sea route in three main phases. Thus, a maritime diffusion model is the most likely explanation of their expansion.


The radiocarbon results suggest that megalithic graves emerged within a time interval of 200 y to 300 y in the second half of the fifth millennium cal BC in northwest France, the Mediterranean, and the Atlantic coast of the Iberian Peninsula. Northwest France is, so far, the only megalithic region in Europe which exhibits a premegalithic monumental sequence and transitional structures to the megaliths, suggesting northern France as the region of origin for the megalithic phenomenon. For the remaining regions with an early megalithic proliferation in the fifth millennium cal BC (such as Catalonia, southern France, Corsica, Sardinia, and probably the western Iberian Peninsula and Italian mainland), megaliths are found occurring in small clusters. These are exceptional grave forms for this period in their respective regions, at a time when subterranean cists, pit burials and hypogea (dug-out subterranean burial chambers) were still the most common burial rites. A fresh expansion occurred during the first half of the fourth millennium cal BC when thousands of passage graves were built along the Atlantic coast of the Iberian Peninsula, Ireland, England, Scotland, and France. Their distribution emphasizes the maritime linkage of these societies and a diffusion of the passage grave tradition along the seaway. The passage graves mark a radical change of burial rites, along with other economic and social changes in Europe. In the second half of the fourth millennium cal BC, the passage grave tradition finally reaches Scandinavia and the Funnel Beaker areas. Again, there is evidence for the spread of megalithic architecture along the seaway. The first known passage graves in Scandinavia were built on the western coasts of the Swedish Islands Oland and Gotland, which are both situated in the Baltic.

We have thus been able to demonstrate that the earliest megaliths originated in northwest France and spread along the sea routes of the Mediterranean and Atlantic coasts in three successive principal phases. Their expansion coincided with other social and economic changes of Neolithic and Copper Age societies beyond the scope of this article. The older generation of archaeologists were correct concerning a maritime diffusion of the megalithic concept. They were wrong regarding the region of origin and the direction of the megalithic diffusion. The megalithic movements must have been powerful to spread with such rapidity at the different phases, and the maritime skills, knowledge, and technology of these societies must have been much more developed than hitherto presumed. This prompts a radical reassessment of the megalithic horizons and invites the opening of a new scientific debate regarding the maritime mobility and organization of Neolithic societies, the nature of these interactions through time, and the rise of seafaring.