A Much Earlier Polish Genocide

In the late Neolithic/Copper Age/early Bronze Age period, in what is now southern Poland, the incoming Indo-European Corded War culture people, who were metal age farmers with horses, were executing women and children from the invaded existing (probably non-Indo-European) Globular Amphora culture of semi-nomadic cow and pig herders, and then burying them in mass graves.

Around 2,800 BCE, in what is now southern Poland, a family group of fifteen individuals associated with the Globular Amphora culture (GAC) were massacred. They were probably captured and executed, because each victim was killed with a blow to the head from the same type of weapon, possibly a stone axe, and lacked defensive wounds. The dead were mostly women and children. They were buried in a mass grave, but with great care and very likely by someone who knew them well.

This Late Neolithic mass grave is the focus of a new ancient DNA and archeological research paper at PNAS by Schroeder et al. (see here). The authors tentatively attribute the massacre to the Corded Ware culture (CWC) people, who were expanding rapidly at the time across much of Europe from their homeland on the Pontic-Caspian steppe.

Razib Khan has some detailed genetic analysis and interesting speculations about the likely context of the killings (he thinks that the slaughter may have occurred while the adult warrior men were away from the village and then lovingly and carefully buried the kin that they discovered when they returned, which is a historically attested tactic in pre-modern war).


The genocide that came to Poland later, during World War II, should be familiar to everyone, even though, in fact, many people never learned anything about it. 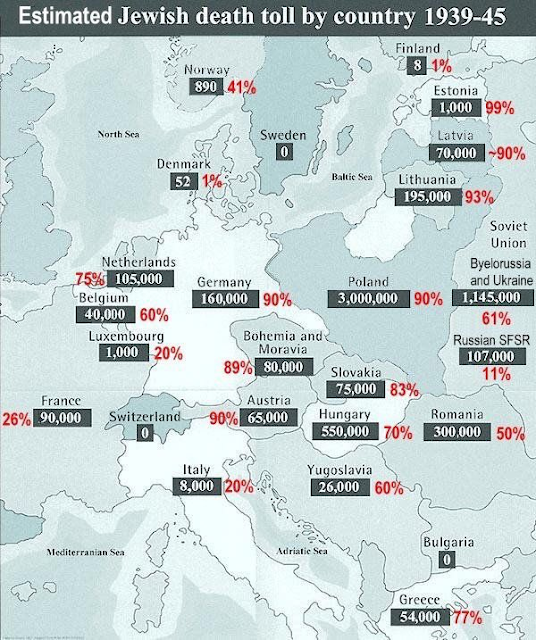 Bell Beaker blogger, meanwhile, recounts a group grave from Spain from the Bell Beaker era (basically, Copper Age/early Bronze Age) containing multiple girls who were beheaded, although this account has less context for why this might have been done.

In both cases, the massacres were from the prehistoric era. But, in my view, legendary historical Biblical accounts of the ancient Hebrews committing similar atrocities, for example, in Chapter 31 of the Hebrew Bible book of Numbers, provide the best attested insights from a period as close in time as we have available, about the kinds of political and social contexts that this could have involved.
Posted 4:53 PM
Email ThisBlogThis!Share to TwitterShare to FacebookShare to Pinterest
Labels: anthropology, culture, Europe, genetics, history, language

have you read the bible cover to cover?

Lol, a link to the Skeptics Annotated. A bunch of people who judge ancient Levantine texts through the prism of modern era Western Christian morality, all while refusing to acknowledge the fact that they do so. They imagine their moral outlook is universal.

there are secular and platonic and aristotelean traditions that also condemn these "ancient Levantine texts " aka the bible.

@fancylads,
"Lol, a link to the Skeptics Annotated. A bunch of people who judge ancient Levantine texts through the prism of modern era Western Christian morality"

Western Christian morality like being anti-genocide, anti-stoning, anti-slavery, and so on. Yes, the brutality of the old testament is shocking. *Maybe* they viewed Yaweh more as a powerful God not a God of love, friendship, morality.

Yet, the ancient Jews clearly did have a sense of morality. You see this in the book of proverbs & psalms & in the prophet books. There, they condemn evil men who lie, abuse, murder, steal, slander, and so on. Those books advocate kindness & peace.

Also, clearly many western Christains don't believe in those morals. Until, maybe the enlightnemnt, they were ok with conquest, slavery, brutality just like in the old testament. As, you know self-hating leftist westerners can never stop condemning their ancestors for those things.

"have you read the bible cover to cover?"

Pretty much. I'll admit to skimming past some genealogies and the like. I attended church pretty much every week until I graduated from college as an undergraduate in liturgical churches, and then again in Korean Presbyterian churches and in a Presbyterian Church (USA), for about three years following graduating from law school. I was confirmed in the Lutheran Church with the study that went with that. And, one of my minor's in college was in history which involved lots of history of the Roman Catholic and Orthodox churches, in addition to my own personal investigations.

"Lol, a link to the Skeptics Annotated."

I link to it because it's easy to do so in HTML formatted text. The biblical text in the Skeptics Annotated is the King James Version, which is the most famous of the English translations and is familiar in a lot of popular culture, even though it is obviously not the easiest to read in contemporary English. The annotations are irrelevant for the purposes I am using it.

This is certainly true. But, of course, I am using the ancient Levantine texts for exactly the opposite reason here. I am referencing these texts in order to try to understand and to shed insight on the mindset of pre-modern people who carry out mass killings of ethnically different people, from their point of view, in their words (translated, of course, because I can't read ancient Hebrew in the original and neither can most of my readers).

Indeed, even if the events described in these texts aren't authentic accounts of the past, they do, at least, represent the understanding of the Jewish people as of the time that they were compiled (somewhere in the vicinity of the 3rd to 6th century BCE) of their own history, in which we can presume that the Jews felt that they were the good guys.

I don't consider their actions moral by my own standards, but I do recognize that they would have viewed their actions through another lens. And, I am not familiar with many other ancient texts that explain these activities from the point of view of the people conducting them, although I imagine that there are probably less widely known (to me and my audience) Akkadian, Arabic, Chinese, Hittite, and Sanskrit texts, at least, that do so.

To be clear, I was a math major with minors in government, in history, and in law and society as an undergraduate at a religiously founded but secular at the time college (Oberlin College) who attended an Episcopalian Church (and was actually a Sunday school teacher as well) while I was in college, not an undergraduate college student studying liturgical churches.

Oberlin was founded mostly by progressive Protestant ministers and theologians (e.g. Charles Grandison Finney, Asa Mahan, John Jay Shipherd, Philo Stewart, John Keep, William Dawes and Henry Churchill King), although it was not strictly speaking sectarian, and it originally had a theology school. But, the college converted from being a religious institution to a secular one, and the the theology school was relocated to Vanderbilt University, in 1966.

isn't bell hooks a member faculty of oberlin there?

oberlin has reputation of far left

why did you lose faith in christianity and did you consider other religions like buddhism?

Oberlin is one of the most liberal institutions in the nation. When I was there, the Democratic Socialists club had 600 members on a campus of 3000 students, we had as many people living in student cooperatives as Berkley which has twelve times as many students, there were 40 people in the Trotskyist club, and there were 8 Republicans on campus. bell hooks was a member of the faculty there at some point. I don't know if she is still living or if she is still at Oberlin if she is (she was actively publishing in the early 1990s twenty-five years ago and she wasn't as young as a college student then).

I lost faith in Christianity because I read the Bible and was also familiar with science and history. I never considered other religions like Buddhism. I actually lost faith at about 15 years of age, shortly before I was confirmed, but kept going partially to see if Lutheranism was the problem and not Christianity entirely, and partially out of habit and social pressure. Episcopalians are among the least evil Christians and the tradition is nice. But, ultimately, that wasn't enough. Neither were the Presbyterians (the Korean Presbyterian was socially obligated, the English speaking one was a last and final chance to have my mind changed and a product of social pressure in a small rural town).

Once you ditch the idea of the supernatural it doesn't make sense to adopt another kind of supernatural worldview.

bell hooks is still living, is 67 years old, and last worked in a formal academic post in 2014. She is not longer at Oberlin. https://en.wikipedia.org/wiki/Bell_hooks

you think buddhism is supernatural?

personally i'm not sure i'd be happy at oberlin myself. i'm surprised you didn't pick something like MIT or even harvard or stanford

Didn't get into Stanford or Harvard. Didn't want a pure STEM school like MIT. Enjoyed Oberlin. Pomona was my first choice and I got in but didn't go for complicated reasons.