Psychoactive drugs weren't particular to the Old World. They were used by shamans in the highlands of the Andes Mountains around 1000 CE.

In a Bolivian rock shelter likely used 1,000 years ago for religious rituals, archaeologists found a collection of drug paraphernalia that still contains traces of psychoactive plants. A pouch made from three fox snouts likely contained a stash of leaves and seeds. From New Scientist:

(The items) include a 28-centimetre-long leather bag, a pair of wooden snuffing tablets, a snuffing tube, a pair of llama-bone spatulas, a textile headband, fragments of dried plant stems and a pouch made from three fox snouts stitched together. The snuffing tube and tablets feature ornate carvings of human-like figures. 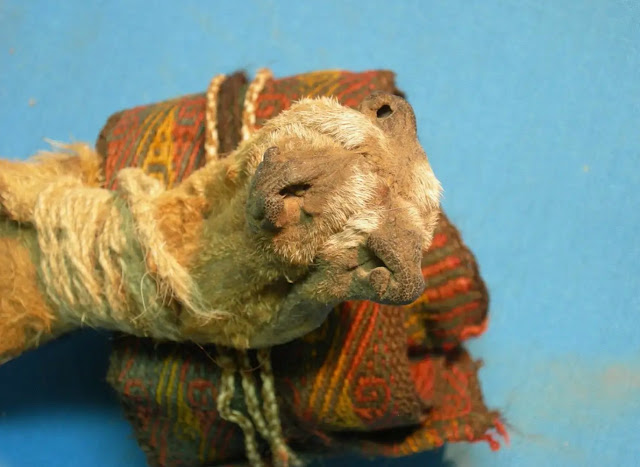 A picture of the pouch described above.


The source is: "Chemical evidence for the use of multiple psychotropic plants in a 1,000-year-old ritual bundle from South America" (PNAS).

DMT (the active ingredient in Ayahuasca) is a psychedelic drug in the same effect category as LSD and "magic mushrooms." It is often used in connection with harmine.

In large doses, harmine can cause agitation, excessively low or high heart rates, blurred vision, hallucinations, dangerously low blood pressure, and a tingling, pricking, chilling, burning, or numb sensation on the skin with no apparent physical cause. In low doses it is a cancer drug, an anti-depressant of the MAOI variety, and promotes bone growth.

Bufotenine is chemically a close relative of DMT found in toad secretions (it can be lethal in high doses) and in certain South American seeds.

Cocaine is widely used illegally as a general nervous system stimulant and is considered highly addictive when used in that manner at the doses common in those uses. Benzoylecgonine (BZE) is a metabolite of cocaine.

Given the mix of compounds that were found together, and their effects, the hypothesis that this was the drug stash of a shaman is very plausible. This fits attested examples of how these compounds have been used by indigenous South American people.
Posted 3:22 PM
Email ThisBlogThis!Share to TwitterShare to FacebookShare to Pinterest
Labels: anthropology, history, medicine, New World