Denisovans Were In Tibet First 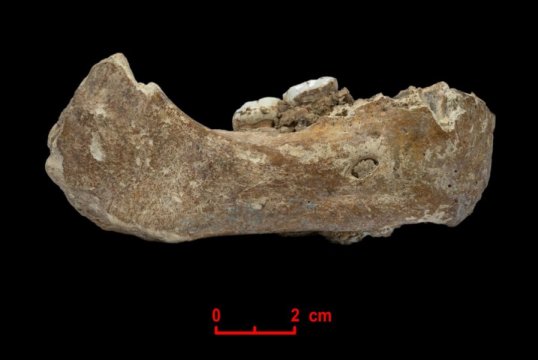 The partial jaw bone shown above (which on my laptop screen is close to its actual size) from 160,000 years ago in Tibet was identified initially as Denisovan because the shape of the teeth in it had features unique to the Denisovan teeth from a Siberian cave from which Denisovan DNA was detected. The identification was confirmed by comparing non-DNA proteins in the Tibetan sample which degrade less readily than DNA does.

The jaw bone brings us much closer to figuring out what Denisovan's looked like since we only had teeth and DNA until now, although our sense of what they looked like is still very fuzzy. There are a number of instances of East Asian hominin remains with a mix of archaic and modern features that might be Denisovans or might be something else, but those haven't yielded DNA or other evidence necessary to confirm or rule out the possibility that the samples are from the same species.

We already knew that it was likely that Denisovans had lived in Tibet because the high altitude adaptation genes in humans there today were introgressed from Denisovan DNA and then grew ubiquitous because those genes had selective advantage. This also implies that there was a Denisovan presence in Tibet as recently as 40,000-50,000 years ago when modern humans first arrived there.

Genetically, Denisovans share a genetic clade with Neanderthals and appear to have diverged from modern humans at about the same time, but the Denisovans have a much less successful population history than the Neanderthals did, in the Siberian individuals, at least, because there is are genome based indications of a continually small effective population size among Denisovans.

there's a transcript of an interview with Witten at Bee's blog.

one thing i found interesting,

wow. for someone as smart as Witten he's shown close to zero curiosity and interest in other non-string research into QG

there's NO doubt, in this interview, Witten only believes in strings and nothing, not the results from LHC, has shaken is faith.

Denisovans probably had a considerably larger population size than Neanderthals, judging from the greater genetic diversity ( seen in the introgressions into Melanesians).