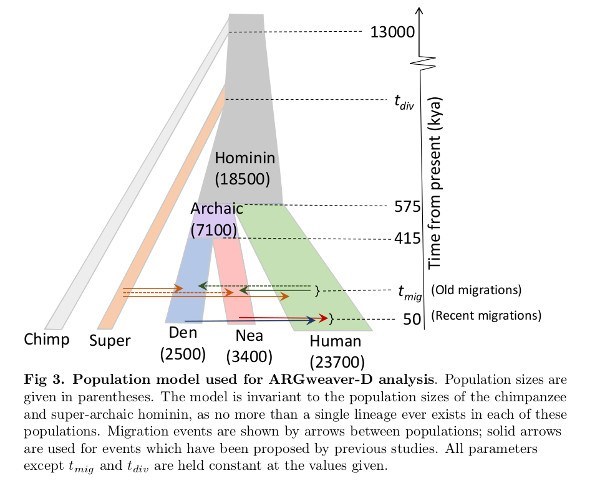 According to a new study looking Neanderthal and Denisovan genomes with powerful statistical analysis tools:

We identify 3% of the Neanderthal genome that is putatively introgressed from ancient humans, and estimate that the gene flow occurred between 200-300 kya. . . . We also identify 1% of the Denisovan genome which was likely introgressed from an unsequenced hominin ancestor, and note that 15% of these regions have been passed on to modern humans through subsequent gene flow.

It seems to be a rule that any new species (or mostly population replacing migration wave within the same species for that matter) will receive some introgression from its predecessor species, which in turn is passed on in greatly diluted amounts to its successor species.
Posted 6:23 AM
Email ThisBlogThis!Share to TwitterShare to FacebookShare to Pinterest
Labels: evolution, genetics

isn't this a form of multiregionalism, or if that is the wrong term, hybridization?

This is very far afield from multiregionalism.

(1) Because most regional differences in modern humans are not due to local archaic admixture.

Also, almost all non-Africans have Neanderthal admixture traceable to a single admixture event, although Denisovan is more varied. Virtually no superarchaic admixture is direct, most is mediated through other archaic admixture even though the possibility of a direct introgression is allowed in the model if the data had pointed to it.

Hybridization is a very general term but tends to refer to near equal contributions from multiple lines. Where one line is predominant and the other is slight, you generally call in archaic introgression.