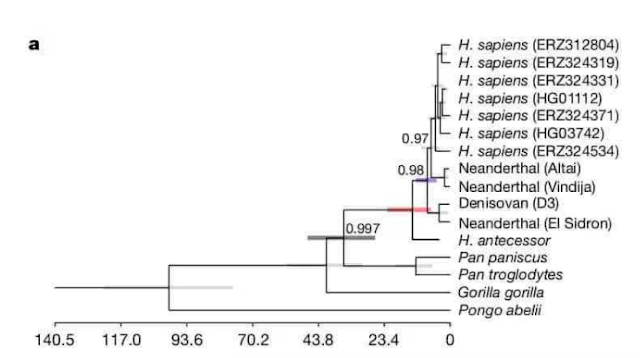 Details regarding the autosomal DNA of an archaic hominin from 800,000 years ago, half a million years before modern humans evolved, has been inferred from proteins that it produced which were then fossilized. This revealed that the DNA of the archaic hominin species Homo antecessor was closer to the genomes of modern humans, Neanderthals and Denisovans than expected, and was probably a sister clade to the shared ancestor species those three hominin species.

It also bears mentioning how amazing a scientific achievement this study is. This is twenty times older than any previously ancient DNA sequencing. It was widely believed that it would be impossible to do this. It replaces a vague hypothetical ghost population with a hard data point. If you had asked me a week ago when I thought this would be possible, I would have said either "never" or several decades in the future.

"Ancient protein analysis provides evidence for a close relationship between Homo antecessor, us (Homo sapiens), Neanderthals, and Denisovans. Our results support the idea that Homo antecessor was a sister group to the group containing Homo sapiens, Neanderthals, and Denisovans," says Frido Welker, Postdoctoral Research Fellow at the Globe Institute, University of Copenhagen, and first author on the paper.

By using a technique called mass spectrometry, researchers sequenced ancient proteins from dental enamel, and confidently determined the position of Homo antecessor in the human family tree. The new molecular method, palaeoproteomics, developed by researchers at the Faculty of Health and Medical Sciences, University of Copenhagen, enables scientists to retrieve molecular evidence to accurately reconstruct human evolution from further back in time than ever before.

The human and the chimpanzee lineages split from each other about 9-7 million years ago. . . . "Much of what we know so far is based either on the results of ancient DNA analysis, or on observations of the shape and the physical structure of fossils. Because of the chemical degradation of DNA over time, the oldest human DNA retrieved so far is dated at no more than approximately 400,000 years," says Enrico Cappellini, Associate Professor at the Globe Institute, University of Copenhagen, and leading author on the paper. "Now, the analysis of ancient proteins with mass spectrometry, an approach commonly known as palaeoproteomics, allow us to overcome these limits," he adds.

The fossils analyzed by the researchers were found by palaeoanthropologist José María Bermúdez de Castro and his team in 1994 in stratigraphic level TD6 from the Gran Dolina cave site, one of the archaeological and paleontological sites of the Sierra de Atapuerca, Spain.

Initial observations led to conclude that Homo antecessor was the last common ancestor to modern humans and Neanderthals, a conclusion based on the physical shape and appearance of the fossils. In the following years, the exact relation between Homo antecessor and other human groups, like ourselves and Neanderthals, has been discussed intensely among anthropologists. Although the hypothesis that Homo antecessor could be the common ancestor of Neanderthals and modern humans is very difficult to fit into the evolutionary scenario of the genus Homo, new findings in TD6 and subsequent studies revealed several characters shared among the human species found in Atapuerca and the Neanderthals. In addition, new studies confirmed that the facial features of Homo antecessor are very similar to those of Homo sapiens and very different from those of the Neanderthals and their more recent ancestors.

"I am happy that the protein study provides evidence that the Homo antecessor species may be closely related to the last common ancestor of Homo sapiens, Neanderthals, and Denisovans. The features shared by Homo antecessor with these hominins clearly appeared much earlier than previously thought. Homo antecessor would therefore be a basal species of the emerging humanity formed by Neanderthals, Denisovans, and modern humans," adds José María Bermúdez de Castro, Scientific Co-director of the excavations in Atapuerca and co-corresponding author on the paper.

The abstract and the citation to the paper are as follows:


The phylogenetic relationships between hominins of the Early Pleistocene epoch in Eurasia, such as Homo antecessor, and hominins that appear later in the fossil record during the Middle Pleistocene epoch, such as Homo sapiens, are highly debated. For the oldest remains, the molecular study of these relationships is hindered by the degradation of ancient DNA. However, recent research has demonstrated that the analysis of ancient proteins can address this challenge. Here we present the dental enamel proteomes of H. antecessor from Atapuerca (Spain) and Homo erectus from Dmanisi (Georgia), two key fossil assemblages that have a central role in models of Pleistocene hominin morphology, dispersal and divergence. We provide evidence that H. antecessor is a close sister lineage to subsequent Middle and Late Pleistocene hominins, including modern humans, Neanderthals and Denisovans. This placement implies that the modern-like face of H. antecessor—that is, similar to that of modern humans—may have a considerably deep ancestry in the genus Homo, and that the cranial morphology of Neanderthals represents a derived form. By recovering AMELY-specific peptide sequences, we also conclude that the H. antecessor molar fragment from Atapuerca that we analysed belonged to a male individual. Finally, these H. antecessor and H. erectus fossils preserve evidence of enamel proteome phosphorylation and proteolytic digestion that occurred in vivo during tooth formation. Our results provide important insights into the evolutionary relationships between H. antecessor and other hominin groups, and pave the way for future studies using enamel proteomes to investigate hominin biology across the existence of the genus Homo.

Wow. You're the first blog to post about this.

It's not DNA that they are MSing, it's just run of the mill proteins, right?

@Guy You are correct. Although, in this application, the proteins were used to infer key aspects of the subject's DNA. They did something similar to making inferences about pottery tools from the finished products.