Davidski, at his Eurogenes blog, makes a good case that the members of the Fatayanovo culture (a Chalcolithic and early Bronze Age culture which flourished in the forests of Russia from c. 2900 BCE to 2050 BCE) were linguistically more likely to have spoken a proto-Indo-Iranian language (a major subfamily of the Indo-European language family that includes the Indo-Aryan languages derived from Sanskrit, the Iranian languages such as Persian, and Nuristani, a minor language family of Central Asia now spoken in part of Afghanistan by about 130,000 people), rather than the language of the Corded Ware civilization people with whom this culture is often lumped (whose people may have spoken a Balto-Slavic or Germanic language family language). As he explains: 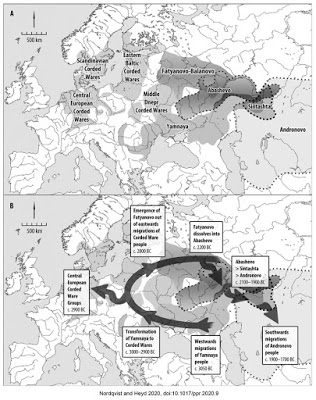 Fatyanovo males were rich in Y-haplogroup R1a-Z93, which is found at very low frequencies in Balto-Slavic populations (see here). It's actually much more common nowadays in Central and South Asia, where it often reaches frequencies of over 50% in Indo-Iranian speaking groups.
Balts and Slavs are rich in R1a-Z282, which is a sister clade of R1a-Z93, and has been found in Corded Ware and Corded Ware related samples from west of Fatyanovo sites. That is, in present-day Poland and the Baltic states.
Therefore, the origins of the Balto-Slavs should be sought somewhere west of the Fatyanovo culture, probably in the Corded Ware derived populations from what is now the border zone between Poland, Belarus and Ukraine.
Indeed, in my view the Fatyanovo people are more likely to have spoken Proto-Indo-Iranian rather than anything ancestral to Baltic or Slavic (see here). 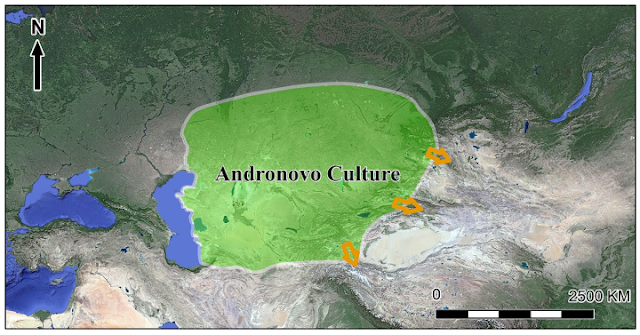 Deep in China's interior region there is an Andronovo cemetery contains bodies genetically (as judged by mtDNA K1b and a PCA and f3 analysis of the autosomal ancient DNA recovered from one individual in the cemetery) almost identical to Andronovo individuals from the Eurasian steppe, the furtherest East that West Eurasian remains have been seen. 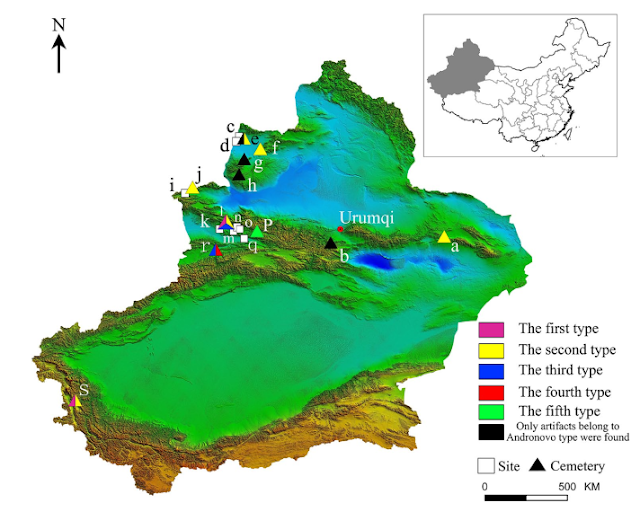 Baigetuobie cemetery is located to the east of the region (yellow triangle "a" above). Archaeologists have unearthed 32 burials belonging to the Andronovo culture. The radiocarbon dating of some samples shows that this cemetery is dated between 1782 BCE and 1439 BCE.
Jiangsong Zhu and his colleagues have just published a paper entitled: The Baigetuobie cemetery: New discovery and human genetic features of Andronovo community's diffusion to the Eastern Tianshan Mountains (1800–1500 BC).

The paper that Davidski is discussing (and differing with in the post linked above) is:

Your link to Davidski is wrong; it goes to blogger.