Science News has a nice, lengthy, well sourced, review article summarizing the when and where's of hominin evolution, which began in Africa and involved multiple species, some of which left Africa before modern humans did. 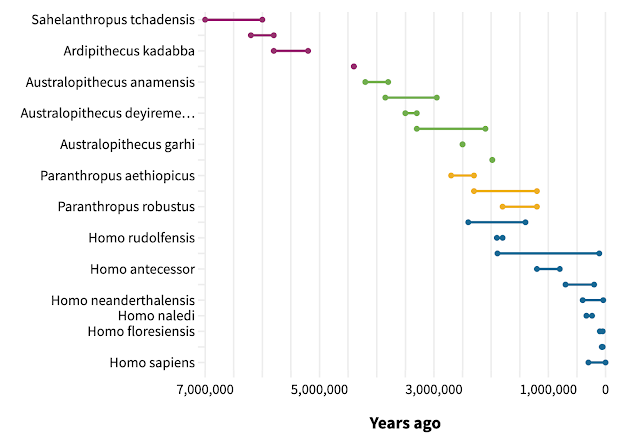 Paleoanthropologists have sketched a rough timeline of how that evolution played out. Sometime between 9 million and 6 million years ago, the first hominins evolved. Walking upright on two legs distinguished our ancestors from other apes; our ancestors also had smaller canine teeth, perhaps a sign of less aggression and a change in social interactions. Between about 3.5 million and 3 million years ago, humankind’s forerunners ventured beyond wooded areas. Africa was growing drier, and grasslands spread across the continent. Hominins were also crafting stone tools by this time. The human genus, Homo, arrived between 2.5 million and 2 million years ago, maybe earlier, with larger brains than their predecessors. By at least 2 million years ago, Homo members started traveling from Africa to Eurasia. By about 300,000 years ago, Homo sapiens, our species, emerged.

The review article also puts this narrative in the context of the twists and turns of the scientific process that produced this narrative.

Their chart is fuller than your chart. Curious.