The LHCb experiment has made a new measurement of the W Boson mass. The Particle Data Group (PDG) global average measurement for the W boson mass prior to this paper was 80,379 ± 12 MeV. 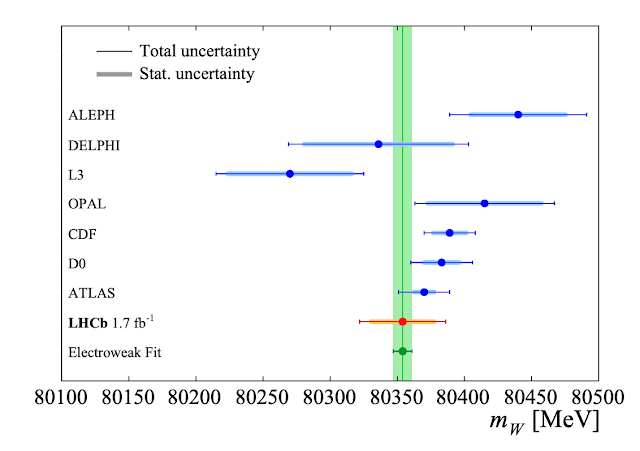 The new result is 80,354 ± 32 MeV, which is identical to the prediction of global electroweak fits:

The uncertainty is 23 MeV statistical and 22 MeV from other sources of uncertainty, mostly theory related. So, there isn't a huge amount of improvement in the uncertainty that can be achieved just from collecting more data.
This is also consistent with the old PDG average at one sigma given the mutual uncertainties involved in the old global average and the new measurement.
The W/Z mass ratio at the LHCb value is 0.88119 which implies a weak mixing angle (a.k.a. Weinberg angle) of 28.21º compared to a CODATA 2018 value of 28.17º.
The new LHCb measurement will drag down the PDG global average for the W boson mass, but only to about 80,372 MeV, since the global average is margin of error weighted and the new measurement has a much larger margin of error than the old PDG global average that it will contribute to now.
The new measurement was made using proton-proton collision data at 13 TeV run-2 energies corresponding to an integrated luminosity of 1.7 fb recorded during 2016 by the LHCb experiment.
The CMS experiment at the LHC has still not produced a precision W boson mass measurement.
The preprint is:
LHCb collaboration, "Measurement of the W boson mass" arXiv:2109.01113 (September 2, 2021).
The New Value Of The Fermi Constant
For comparison, the PDG values of the other fundamental boson masses and the Higgs vacuum expectation value are as follows:
Z boson 91,187.6 ± 2.1 MeV
Higgs boson 125,250 ± 170 MeV
Higgs vev 246,219.65 ± 0.06 MeV
Note that the Higgs vacuum expectation value above reflects a new and more precise measurement of Fermi's constant announced on August 20, 2021 of 1.1663787(6) * 10^-5 GeV^-2, a thirty-fold improvement in precision. This improvement was made possible by a thirty-fold improvement in the precision with which the mean lifetime of the muon has been measured.
Alas, this improvement isn't material for most purposes at this time, because there are almost always other contributions to equations and formulas in which the Higgs vacuum expectation value and/or the Fermi constant are utilized that swamp this slight uncertainty (although the uncertainty in the electromagnetic coupling constant of 0.15 parts per billion is even smaller).
For example, in the theoretical calculation of muon g-2, the uncertainty from the electroweak component of that calculation is only about 2% of the total uncertainty in the theoretical calculation (with hadronic QCD calculations providing the lion's share of the uncertainty).
Both the Higgs vacuum expectation value and the Fermi constant are functionally related to the weak force coupling constant in Standard Model electroweak theory.  Specifically:

Analysis And Conjectural Mass Relationships
The global electroweak fit of the W boson mass is also sensitive to the top quark pole mass which has a current PDG value of 172,760 ± 300 MeV from direct measurements, and 172,500 ± 700 MeV from cross section measurements, and to the Higgs boson mass mentioned above.
The next heaviest fundamental particle mass in the Standard Model is the bottom quark mass which has a current PDG value of 4,180 +30/-20 MeV, and a FLAG19 value of 4,198 ± 12 MeV (PDG and FLAG19 are two independent collaborations that use slightly different methods to establish global average values for fundamental particle masses and other experimentally measured physical constants).
I track several conjectural theoretical relationships between Standard Model fundamental particle masses as new measurements are released.
The remaining third-generation Standard Model fundamental fermion mass, the tau lepton mass has a PDG value of 1776.86 ± 0.12 MeV. Its predicted value according to the phenomenological Koide's rule for charged leptons (proposed by Yoshio Koide in 1981) is 1776.96864 MeV (which is consistent with the experimentally measured value at 0.9 sigma).
The largest of the three neutrino masses cannot be more than about 1.2 eV, and is very likely to be less than about 75 meV.
All of the first and second generation quarks and leptons of the Standard Model have masses less than that of the tau lepton (the greatest remaining fundamental particle mass is the charm quark mass). All of the other bosons of the Standard Model (even if extended to include a massless graviton) are massless.
Here are some new fits to conjectural mass relationships with the W boson mass at a new global average of 80,372 MeV.
The global LP&C relationship (i.e. that the sum of the squares of the fundamental SM particle masses is equal to the square of the Higgs vev, which is equivalent to saying that the sum of the SM particle Yukawas is exactly 1) which is about 0.5% less than the predicted value (2 sigma in top quark and Higgs boson mass, implying a theoretically expected top quark mass of 173,360 MeV and a theoretically expected Higgs boson mass of 125,590 MeV if the adjustments were proportioned to the experimental uncertainty in the LP&C relationship given the current global average measurements, in which about 70% of the uncertainty is from the top quark mass uncertainty and about 29% is from the Higgs boson mass uncertainty).
Thus, Koide's rule for charged leptons and the global LP&C relationship are likely to be true, and may point the way to a deeper understanding of the source of fundamental particle masses within the Standard Model.
But, the LP&C relationship does not hold separately for fermions and bosons, which would be analogous in some ways to supersymmetry. This is only an approximate symmetry. The sum of the squares of the SM fundamental boson masses is more than half of the square of the Higgs vev by about 0.5% (3.5 sigma of Higgs boson mass, implying a theoretically expected Higgs boson mass of about 124,650 MeV), while the sum of the squares of the SM fundamental fermion masses is less than half of the square of the Higgs vev by about 1.5% (about 2.8 sigma of top quark mass, implying a theoretically expected top quark mass of about 173,610 MeV). The combined deviation from the LP&C relationship for both fermions and bosons independently is 4.5 sigma, which is a very strong tensions that is nearly conclusively ruled out. One wonders if the slightly bosonic leaning deviation from this symmetry between fundamental fermion masses and fundamental boson masses has some deeper meaning or source.
Similarly, the sum of the masses of the W+, W- and Z bosons is 0.29% greater (4.2 sigma of Higgs boson mass which is also a very strong tension) than the double the mass of the Higgs boson. So, if Higgs boson pairs were somehow composite particles of the other electroweak fundamental bosons, the combined masses of the components would be reduced by 0.29% due to negative binding energy. One could also imagine this near miss relationship arising in an extended electroweak unification theory somehow, and being subject to some kind of higher order loop adjustment, with the equality arising only at tree level (in a manner similar to the higher order loop adjustments to muon g-2).
Posted 1:13 AM
Email ThisBlogThis!Share to TwitterShare to FacebookShare to Pinterest
Labels: conjectures, physics, Standard Model physics

Whoa... top, bottom, W, Z, Higgs all heavier than tau. Their masses are measured in GeV...

Everything is in order.

I think you are mistakenly interpolating decimal points where there are commas.

There is nothing wrong with using MeV across the board rather than GeV.

I chose MeV rather than GeV because I think it makes it easier to read and make sense of the smaller MOEs than fractions of a GeV.

Yes, my mistake. I skimmed and saw the sentence "All other quarks, leptons and bosons of the Standard Model have masses less than that of the tau lepton", looked up and saw "MeV" for those other particles, and thought you were saying that the tau is the heaviest fundamental particle! Which would have been very shocking given how closely you track these quantities. But it was a mis-reading. Sorry about that. :-)