The Legacy Of Herding

According to the widely known ‘culture of honor’ hypothesis from social psychology, traditional herding practices are believed to have generated a value system that is conducive to revenge-taking and violence.

We test this idea at a global scale using a combination of ethnographic records, historical folklore information, global data on contemporary conflict events, and large-scale surveys.

The data show systematic links between traditional herding practices and a culture of honor. First, the culture of pre-industrial societies that relied on animal herding emphasizes violence, punishment, and revenge-taking. Second, contemporary ethnolinguistic groups that historically subsisted more strongly on herding have more frequent and severe conflict today. Third, the contemporary descendants of herders report being more willing to take revenge and punish unfair behavior in the globally representative Global Preferences Survey. In all, the evidence supports the idea that this form of economic subsistence generated a functional psychology that has persisted until today and plays a role in shaping conflict across the globe.

Yiming Cao, et al., "Herding, Warfare, and a Culture of Honor" NBER (September 2021).
Another paper fleshes out the concept a bit more (and has a nice literature review), although its description of the southern United States as historically a herding culture is doubtful. Appalachia was indeed settled by Scotch-Irish herders and does have a culture of honor, but, the lowlands of the American South (which also has a culture of honor), where plantation farming became predominant, was settled by lesser English gentry farmers, not by descendants of herders.

A key element of cultures of honor is that men in these cultures are prepared to protect with violence the reputation for strength and toughness. Such cultures are likely to develop where (1) a man's resources can be thieved in full by other men and (2) the governing body is weak and thus cannot prevent or punish theft.

Todd K. Shackelford, "An Evolutionary Psychological Perspective on Cultures of Honor" Evolutionary Psychology (January 1, 2005) (open access). DOI: https://doi.org/10.1177/147470490500300126
The example of the Southern United States suggests that a weak state may be as important a factor in the development of a culture of honor as a herding economy.
The Legacy Of Plough v. Hoe Farming
Parallel hypotheses from the same disciplines associate ancestral heavy plough farming with strongly patriarchal societies with strong differentiation in gender roles, and ancestral hoe farming with less patriarchal and sometimes even matrilineal societies.
The Legacy Of Clan Based Societies
It has also become common in modern political theory to associate weak government approaching anarchy with clan based societies in which women are forced into highly subordinated roles, somewhat in the tradition of Thomas Hobbes ("nasty, brutish and short") as opposed to those who idealize an Eden-like "state of nature." See, e.g., Valerie M. Hudson, et al., "Clan Governance and State Stability: The Relationship between Female Subordination and Political Order" 109(3) American Political Science Review 535-555 (August 2015).
The Legacy Of Cousin Marriage
Also along the same lines, cousin marriage (often common in clan based societies and also among feudal aristocrats) tends to be a practice the undermines democratic government: 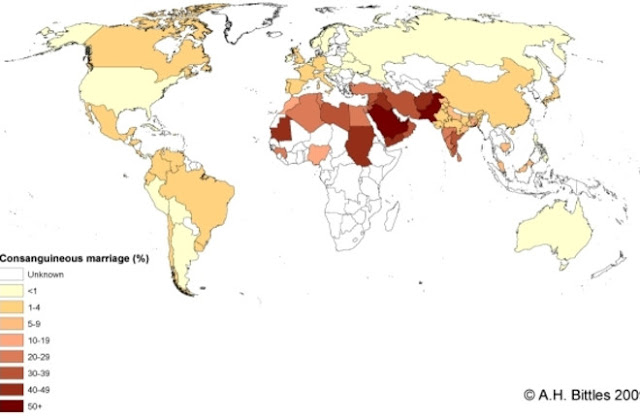 Cousin marriages create extended families that are much more closely related than is the case where such marriages are not practiced. To illustrate, if a man’s daughter marries his brother’s son, the latter is then not only his nephew but also his son-in-law, and any children born of that union are more genetically similar to the two grandfathers than would be the case with non-consanguineous marriages. Following the principles of kin selection (Hamilton, 1964) and genetic similarity theory (Rushton, 1989, 2005), the high level of genetic similarity creates extended families with exceptionally close bonds. Kurtz succinctly illustrates this idea in his description of Middle Eastern educational practices:
If, for example, a child shows a special aptitude in school, his siblings might willingly sacrifice their personal chances for advancement simply to support his education. Yet once that child becomes a professional, his income will help to support his siblings, while his prestige will enhance their marriage prospects. (Kurtz, 2002, p. 37).
Such kin groupings may be extremely nepotistic and distrusting of non-family members in the larger society. In this context, non-democratic regimes emerge as a consequence of individuals turning to reliable kinship groupings for support rather than to the state or the free market. It has been found, for example, that societies having high levels of familism tend to have low levels of generalized trust and civic engagement (Realo, Allik, & Greenfield, 2008), two important correlates of democracy. Moreover, to people in closely related kin groups, individualism and the recognition of individual rights, which are part of the cultural idiom of democracy, are perceived as strange and counterintuitive ideological abstractions (Sailer, 2004).

From the body text of the following article whose abstract is also set forth below:

This article examines the hypothesis that although the level of democracy in a society is a complex phenomenon involving many antecedents, consanguinity (marriage and subsequent mating between second cousins or closer relatives) is an important though often overlooked predictor of it. Measures of the two variables correlate substantially in a sample of 70 nations (r = −0.632, p < 0.001), and consanguinity remains a significant predictor of democracy in multiple regression and path analyses involving several additional independent variables.

The data suggest that where consanguineous kinship networks are numerically predominant and have been made to share a common statehood, democracy is unlikely to develop.

Possible explanations for these findings include the idea that restricted gene flow arising from consanguineous marriage facilitates a rigid collectivism that is inimical to individualism and the recognition of individual rights, which are key elements of the democratic ethos. Furthermore, high levels of within-group genetic similarity may discourage cooperation between different large-scale kin groupings sharing the same nation, inhibiting democracy. Finally, genetic similarity stemming from consanguinity may encourage resource predation by members of socially elite kinship networks as an inclusive fitness enhancing behavior.

Something to keep in mind when talking about this is that the culture who does the most honor killings in the USA, are African Americans.

Honor killings in the U.S. are shared by both white Southerners and Appalachians (who have murder rates far in excess of whites from elsewhere, although admittedly, lower than the average African-American) and African Americans (apart from recent immigrants from Africa), almost all of whom spent centuries immersed in the same Southern culture prior to emancipation and a disproportionate share of whom remain there.

Likewise, African-American Vernacular English (which doesn't have much regional variation within the U.S.) is a linguistic derivative of the prevailing regional dialect of the Southeastern U.S.

Similarly, the vast majority of both Southern Whites and African-Americans belong to Christian Churches that are doctrinally and in practice Evangelical in character that are derived from a common source in the Second Great Awakening.

Southern Whites and African-Americans have far more in common culturally than either side is very comfortable admitting.