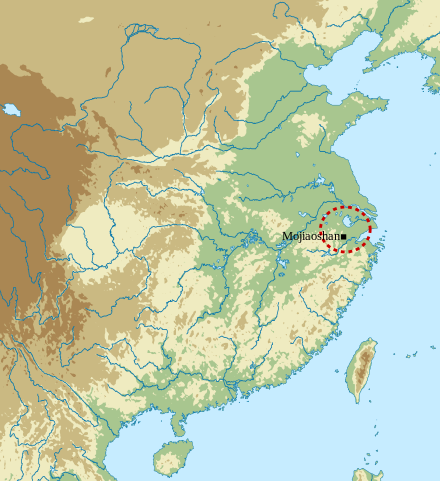 This blurb isn't the most grammatically eloquent, but the Liangzhu culture really is a very significant prehistoric Chinese archeological culture, and knowing what ended it provides important insight. Wikipedia introduces the culture as follows:

The Liangzhu culture (/ˈljɑːŋˈdʒuː/; 3300–2300 BC) was the last Neolithic jade culture in the Yangtze River Delta of China. The culture was highly stratified, as jade, silk, ivory and lacquer artifacts were found exclusively in elite burials, while pottery was more commonly found in the burial plots of poorer individuals. This division of class indicates that the Liangzhu period was an early state, symbolized by the clear distinction drawn between social classes in funeral structures. A pan-regional urban center had emerged at the Liangzhu city-site and elite groups from this site presided over the local centers. The Liangzhu culture was extremely influential and its sphere of influence reached as far north as Shanxi and as far south as Guangdong. The primary Liangzhu site was perhaps among the oldest Neolithic sites in East Asia that would be considered a state society. The type site at Liangzhu was discovered in Yuhang County, Zhejiang and initially excavated by Shi Xingeng in 1936. A 2007 analysis of the DNA recovered from human remains shows high frequencies of Haplogroup O1 in Liangzhu culture linking this culture to modern Austronesian and Tai-Kadai populations. It is believed that the Liangzhu culture or other associated subtraditions are the ancestral homeland of Austronesian speakers. . . .

The Liangzhu Culture entered its prime about 4000–5000 years ago, but suddenly disappeared from the Taihu Lake area about 4200 years ago when it reached the peak. Almost no traces of the culture were found from the following years in this area.

Recent research has shown that rising waters interrupted the development of human settlements several times in this area. This led researchers to conclude the demise of the Liangzhu culture was brought about by extreme environmental changes such as floods, as the cultural layers are usually interrupted by muddy or marshy and sandy–gravelly layers with buried paleo trees.
Some evidence suggests that Lake Tai was formed as an impact crater only 4500 years ago, which could help explain the disappearance of the Liangzhu culture. However, other work does not find an impact crater structure or shocked minerals at Lake Tai.

The latest research is as follows:

Referred to as "China's Venice of the Stone Age", the Liangzhu excavation site in eastern China is considered one of the most significant testimonies of early Chinese advanced civilization. More than 5000 years ago, the city already had an elaborate water management system. Until now, it has been controversial what led to the sudden collapse. Massive flooding triggered by anomalously intense monsoon rains caused the collapse. . . .

Data from the stalagmites show that between 4345 and 4324 years ago there was a period of extremely high precipitation. . . . "The massive monsoon rains probably led to such severe flooding of the Yangtze and its branches that even the sophisticated dams and canals could no longer withstand these masses of water, destroying Liangzhu City and forcing people to flee." The very humid climatic conditions continued intermittently for another 300 years[.]

Isn't this roughly the same time as massive droughts in west Eurasia?

How so? The Liangzhu culture disappeared about 4200 years ago (2200 BC), which is during the time frame of the 4.2-kiloyear event.

"Starting around 2200 BC, it probably lasted the entire 22nd century BC. It has been hypothesised to have caused the collapse of the Old Kingdom in Egypt as well as the Akkadian Empire in Mesopotamia, and the Liangzhu culture in the lower Yangtze River area.[3][4] The drought may also have initiated the collapse of the Indus Valley Civilisation, with some of its population moving southeastward to follow the movement of their desired habitat,[5] as well as the migration of Indo-European-speaking people into India.[6]"

Fair. I was thinking of the start of the culture ca. 3000 BCE, not its demise, which really wasn't a reasonable way to interpret what you were getting at.

Yes, the start of the Liangzhu culture does not have anything to do with the 4.2-kiloyear event, but, as you seem to acknowledge, apparently its demise has, which, I think, what Ryan's question was about but was not so clear from the framing of the question.