Did Pre-Columbian Mexico Have "Venus" Figurines?

I'm making this post as a "bleg" (a blend of "blog beg") as a request for crowd sourcing help in solving the riddle of whether figurines like the second picture below were present in Pre-Columbian Mexico. Comments from anyone who knows or has relevant information would be greatly appreciated.

Figurines like the one immediately below, known anachronistically as "Venus figurines" were common in prehistoric "Old Europe" (which is one of the reasons that archaeologist Marija Gimbutas guessed (probably incorrectly we can now deduce from the relationships of people in early Neolithic cemeteries from ancient DNA) that pre-Indo-European first farmers had a matriarchal culture. 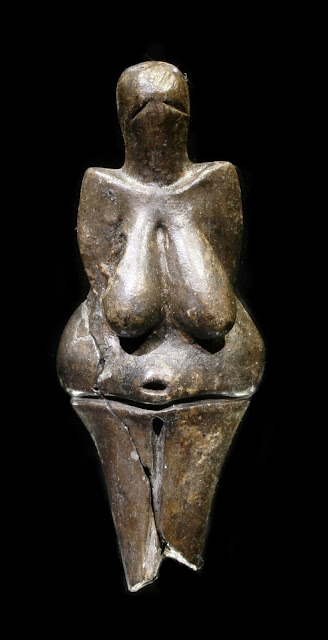 Venus of Dolní Věstonice, the earliest discovered use of ceramics (29,000 BCE – 25,000 BCE)
by Petr Novák, via Wikipedia

The image below is of a figurine from my room at resort in Cancun a few years ago, without interpretive context (presumably to confer good luck in the fertility department for honeymooners, and, for what it was worth, it was a romantic place to stay).

Photo from a resort room in Cancun, Mexico, ca. 2014 CE,
taken by me with an actual camera (before I had a smart phone).


There was something vaguely similar, but the examples that I've seen are not close enough to be the source for the figurine depicted in my photo above. 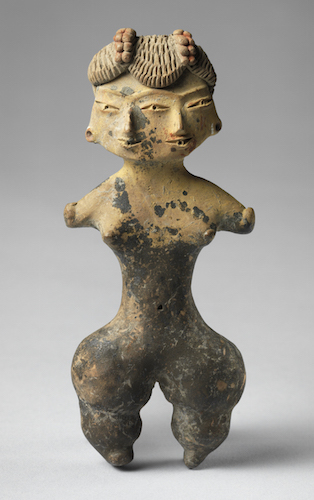 Tlatilco figurines are wonderful small ceramic figures, often of women, found in Central Mexico. This is the region of the later and much better-known Aztec empire, but the people of Tlatilco flourished 2,000-3,000 years before the Aztec came to power in this Valley. Although Tlatilco was already settled by the Early Preclassic period (c. 1800-1200 B.C.E.), most scholars believe that the many figurines date from the Middle Preclassic period, or about 1200-400 B.C.E. Their intimate, lively poses and elaborate hairstyles are indicative of the already sophisticated artistic tradition. This is remarkable given the early dates. Ceramic figures of any sort were widespread for only a few centuries before the appearance of Tlatilco figurines. . . .

The Tlatilco figurine at the Princeton University Art Museum has several traits that directly relate to many other Tlatilco female figures: the emphasis on the wide hips, the spherical upper thighs, and the pinched waist. Many Tlatilco figurines also show no interest in the hands or feet, as we see here. Artists treated hairstyles with great care and detail, however, suggesting that it was hair and its styling was important for the people of Tlatilco, as it was for many peoples of this region. This figurine not only shows an elaborate hairstyle, but shows it for two connected heads (on the single body). We have other two-headed femaile figures from Tlatilco, but they are rare when compared with the figures that show a single head. It is very difficult to know exactly why the artist depicted a bicephalic (two-headed) figure (as opposed to the normal single head), as we have no documents or other aids that would help us define the meaning. 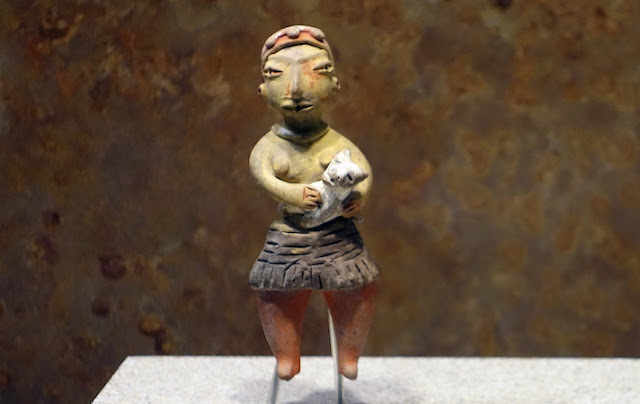 As in the case of their Old European counterparts, male figures are rare.

A lot of Pre-Columbian structures from the Neolithic cultures in the Americas such as those in Mesa Verde in Colorado, show remarkable similarities in design and construction techniques to those of early Neolithic architecture in Anatolia and the Balkans from several thousand years earlier. 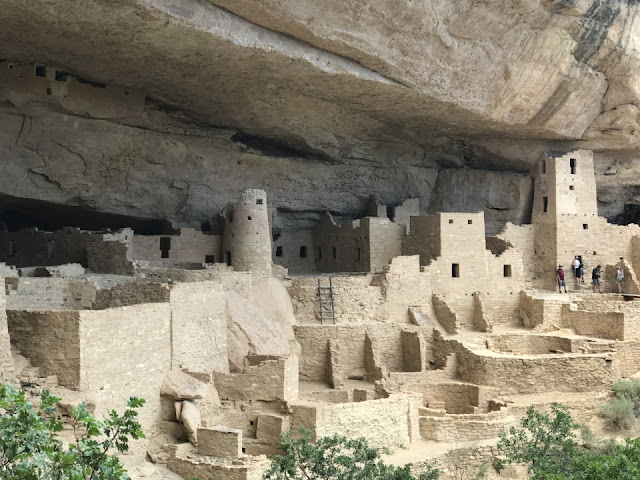 Mesa Verde was built by the Ancestral Pueblo people who made it their home for over 700 years, from 600 to 1300 CE
(image from the National Park Foundation). 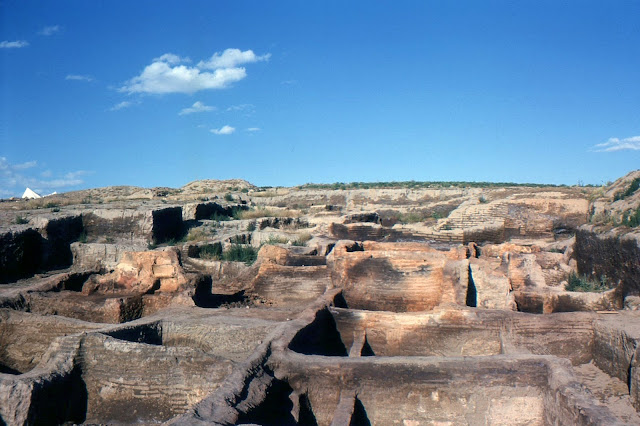 Çatalhöyük, Turkey, after the first excavations by Omar Hoftun - Own work, CC BY-SA 3.0

There are also similarities between the structures built in Neolithic/Copper Age Age Mexico (below top) and those of the Bell Beaker period in Wales (below bottom). 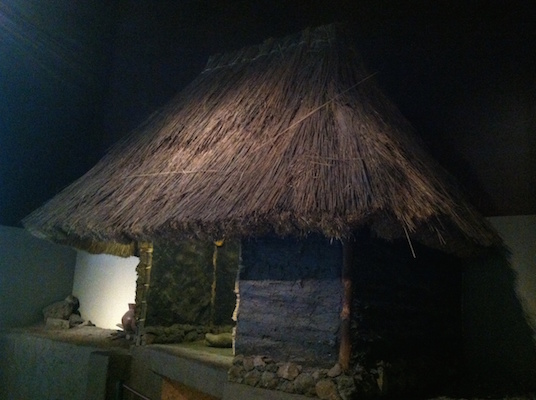 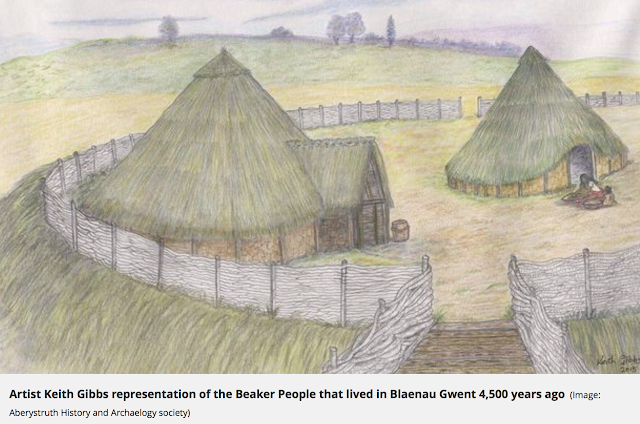 If you'd seen similarities that strong within a few centuries of each other in two places that could have been in contact with each other in that era, you would presume that the earlier one was the source for the methods seen in the later one.

But, these similarities were almost surely a case of independent development of the same technologies and techniques. This is because they pre-dated any contact between the Old World and the Americas that far South that could have transmitted it. There had probably been Austronesian contacts in Pacific Coastal South America and proto-Inuit contacts in the Arctic at about the same time that Mesa Verde was built, but neither of these cultures built early Fertile Crescent Neolithic style structure. Neither did the earlier Paleo-Eskimo peoples who were the main source other than the Founding Population of the Americas of the Na-Dene culture and people.

So far as I know, neither of these Old World cultural influences on the Americas had Venus figurines, and there is too long of a gap in the archaeological record from the Founding population (which could have been a source for Venus figurines as illustrated by the date of top photo) to the earliest known uses of ceramics and construction of Neolithic era structures in the Americas. Any technologies that were present at the time of the Founding population of the Americas would have been lost by the time that ceramics were being use, or the farming had been independently invented in the New World.

In both cases, to the extent that they are independent developments they inform our ideas of how much of the detail of historical technologies and physical cultures was pre-determine by the constraints faced by the people employing them, and how much they were unique creative developments that could have turned out differently.
Posted 8:24 AM
Email ThisBlogThis!Share to TwitterShare to FacebookShare to Pinterest
Labels: alternative history, anthropology, bleg, culture, Europe, genetics, history, intellectual history, New World, technology

I've never seen anything like the 2nd photo in any new world prehistoric imagery. The closest to it (vaguely) was some neo-arctic ivory carving.