Some of the fundamental constants of the Standard Model of Particle Physics are the four parameters from which the values of the nine element CKM matrix, which describes the probability of quarks turning into different kinds of quarks via the weak force, can be determined.  See generally, this Particle Data Group review regarding the CKM matrix.

The square of the absolute value of each element is equal to the probability of the transition described in the element to the second type of quark in the subscript taking place, given that a W+ boson has been emitted by a quark of the type of the first type of quark shown in the subscript. (This version of the CKM matrix can be converted mathematically to the matrix for W- boson emissions if the complex number values of the matrix elements that reflect the charge parity (CP) violating phase of the matrix are used, rather than merely their absolute values shown in this post.)

The parameters are measured by independently assembling experimental data regarding various kinds of top quark and hadron decays in high energy physics experiments, and from beta decays of radioactive element isotypes, that whose data can be used, in principle, to determine particular CKM matrix element values. This is hard, but has become an increasingly precise science with good instrumentation and large data sets reducing both systemic error and statistical error in these measurements to low levels relative to "theoretical error."

Then, this raw data is converted to numerical values of the matrix elements of the CKM matrix using Lattice QCD and other high energy physics calculations. This is the hardest part by far and provides the limiting factor in the precision with which these matrix elements can be determined at this time.

Once this is done, all that is left is comparatively elementary mathematics and statistics that can be done in a moment using simple computer programs on a PC. First, those independent measurements of individual elements are globally fitted to the nine elements of the CKM matrix based upon their raw values, the uncertainty of each measurement value, and the Standard Model's CKM matrix probability sum rules. There are six different unitarity sum rules that apply to the CKM matrix. Then, one globally fits those nine data points to the four Standard Model CKM matrix parameters (something that can be done in any of several widely used parameterization schemes).

To date, these independent CKM matrix parameter measurements using different kinds of decays have been consistent with the Standard Model sum rules to within the range of measurement errors, providing a strong global check that the Standard Model itself is a sound theory. This check shows that the quantities defined are physically meaningful across a robust range of circumstances, and that there do not appear to be "missing beyond the Standard Model quarks" into which W boson transitions outside the Standard Model (e.g. into hypothetical fourth generation up-type and down-type quarks commonly called t' and b', or into supersymmetric particles) occur. The experimental evidence is consistent with all six of the CKM matrix sum rules and also a sum rule related to other CKM matrix parameters, at the two sigma level, and also suggests that some of the margins of error in those measurements have been conservatively overestimated because the fit is "too good" relative to the stated margin of error (a common situation in the case of electroweak measurements in the Standard Model). As the Particle Data Group review article linked above explains:

These provide strong tests of the unitarity of the CKM matrix. With the significantly improved direct determination of |Vtb|, the unitarity checks for the third row and column have also become fairly precise, leaving decreasing room for mixing with other states.

The margin of error in these measurements comes predominantly from "theoretical error", i.e. mostly in the process of converting the raw experimental data into the numerical value of the matrix elements of the CKM matrix using Lattice QCD and other theoretical adjustments (e.g. determining the correct renormalization adjustments to make to the raw data based upon estimates of jet energies in hadron decays).

This is so difficult because, except in the case of top quark decays, which are always to b quarks, except in about 1 in 600 +/- top quark decays, it is impossible to directly measure the decay of an individual free quark because all other quarks are only observed confined into hadrons. So, instead, you have to measure the decay of a composite particle called a hadron, which has more than one quark and many gluons in it, or the decays of the even more complex system of the beta decay of a radioactive isotype of a periodic tale element. Then, you have to used very difficult lattice QCD calculations and other high energy physics calculations in order to use that data to infer the behavior of individual quarks within the decaying composite particles whose decays are actually observed.

So, to grossly oversimplify the matter, the main barrier to getting more precise values for these fundamental CKM matrix constants of the Standard Model is mostly a question of QCD calculations being very cumbersome and requiring almost unfathomable computational power in addition to novel analytical break throughs that are needed to simplify subparts of the calculations involved. As the paper explains:


We have seen that in a number of quantities the theory error is the limiting factor in determining a CKM matrix element. Even in cases for which the experimental and theoretical errors are currently comparable, we can expect that BESIII, Belle II, and LHCb will reduce the experimental errors.

The authors of the paper estimate that theoretical error in these measurements can be reduced by only as much as a factor of five over the next ten years.

The latest values for the absolute value of eight of those nine quantities are as follows (note that both a direct measurement and a global fit value are provided for both of the first two values listed). 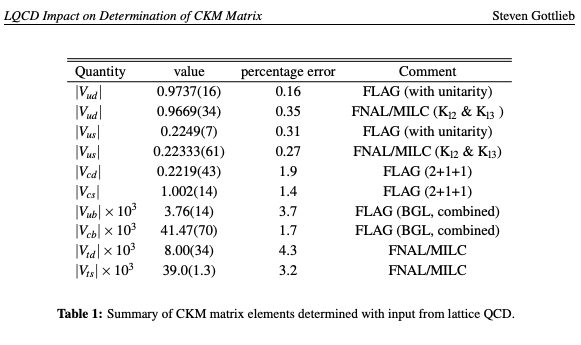 The element for the ninth of these CKM matrix elements, the absolute value of V sub tb, is omitted from the list above.

This element is omitted because there is currently no experiment sufficiently precise in its measurement of this CKM matrix element (and no experiment will be able to do so for the foreseeable future). A precision of about one part per 600 would be required to determine the amount by which the CKM matrix element for the absolute value of V sub tb differs from 1 with a direct measurement, unless beyond the Standard Model physics were present. But, as the chart above shows, the relevant experimental apparatuses (basically only the now concluded Tevatron experiment, and the Large Hadron Collider a.k.a. the LHC) have a relative precision of only a one part per 23 to one part per 59 at this time at the relevant energy scales.

But, we know that the V sub tb element has a value of approximately 0.999. . . based upon a global fit of CKM matrix element values, and the experimental data is not inconsistent with this estimate.

This global fit value can be estimated, with back of napkin precision, from the other values based upon the Standard Model rule that the sum of the squares of the absolute values of V sub td, V sub ts, and V sub tb, is equal to exactly 1, representing a probability of 100% that when there is a W boson flavor changing transition of a t quark to one of the down-type quarks that are possible in a possible Standard Model W boson mediated flavor change (i.e. a transition to a down quark, a strange quark, or a bottom quark).
Posted 2:56 PM
Email ThisBlogThis!Share to TwitterShare to FacebookShare to Pinterest
Labels: physics, QCD, Standard Model physics