Sardinia is of special interest to students of European genetic prehistory because its residents today are more similar genetically to the first farmers of Europe than any other population on Earth. but, they aren't identical to those first farmers either. It is a population that largely missed the Bell Beaker expansion derived from peoples from the European steppe. The Iberian Basque people are the most closely related population to the Sardinians, due to shared early European farmer ancestry with reduced Steppe influence.

The paper below examines how the Sardinian genome got to be the way it is through a transect of ancient DNA sample from the Middle Neolithic era to Medieval era, compared to modern DNA sample. 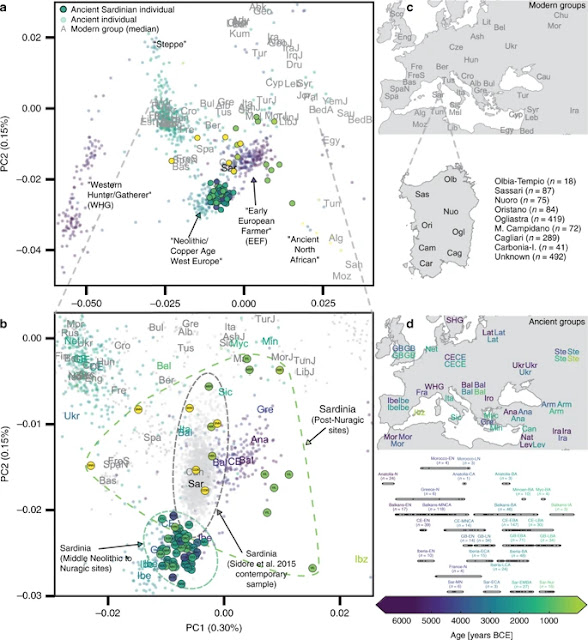 The island of Sardinia has been of particular interest to geneticists for decades. The current model for Sardinia’s genetic history describes the island as harboring a founder population that was established largely from the Neolithic peoples of southern Europe and remained isolated from later Bronze Age expansions on the mainland.

To evaluate this model, we generate genome-wide ancient DNA data for 70 individuals from 21 Sardinian archaeological sites spanning the Middle Neolithic through the Medieval period.

The earliest individuals show a strong affinity to western Mediterranean Neolithic populations, followed by an extended period of genetic continuity on the island through the Nuragic period (second millennium BCE). Beginning with individuals from Phoenician/Punic sites (first millennium BCE), we observe spatially-varying signals of admixture with sources principally from the eastern and northern Mediterranean. Overall, our analysis sheds light on the genetic history of Sardinia, revealing how relationships to mainland populations shifted over time.

As usual, the introduction from the body text in a well written paper like this one provides context and a literature review which can be as valuable as the new findings themselves for a beginner (citations omitted):

The whole-genome sequencing in 2012 of “Ötzi”, an individual who was preserved in ice for over 5000 years near the Italo-Austrian border, revealed a surprisingly high level of shared ancestry with present-day Sardinian individuals. Subsequent work on genome-wide variation in ancient Europeans found that most “early European farmer” individuals, even when from geographically distant locales (e.g., from Sweden, Hungary and Spain) have their highest genetic affinity with present-day Sardinian individuals. Accumulating ancient DNA (aDNA) results have provided a framework for understanding how early European farmers show such genetic affinity to modern Sardinians.

In this framework, Europe was first inhabited by Paleolithic and later Mesolithic hunter-gatherer groups.

Then, starting about 7000 BCE, farming peoples arrived from the Middle East as part of a Neolithic transition spreading through Anatolia and the Balkans while progressively admixing with local hunter-gatherers.

Major movements from the Eurasian Steppe, beginning about 3000 BCE, resulted in further admixture throughout Europe.

These events are typically modeled in terms of three ancestry components: western hunter gatherers (“WHG”), early European farmers (“EEF”), and Steppe pastoralists (“Steppe”). Within this broad framework, the island of Sardinia is thought to have received a high level of EEF ancestry early on and then remained mostly isolated from the subsequent admixture occurring on mainland Europe. However, this specific model for Sardinian population history has not been tested with genome-wide aDNA data from the island.

The oldest known human remains on Sardinia date to ~20,000 years ago. Archeological evidence suggests Sardinia was not densely populated in the Mesolithic, and experienced a population expansion coinciding with the Neolithic transition in the sixth millennium BCE. Around this time, early Neolithic pottery assemblages were spreading throughout the western Mediterranean, including Sardinia, in particular vessels decorated with Cardium shell impressions (variably described as Impressed Ware, Cardial Ware, Cardial Impressed Ware), with radiocarbon dates indicating a rapid westward maritime expansion around 5500 BCE. In the later Neolithic, obsidian originating from Sardinia is found throughout many western Mediterranean archeological sites, indicating that the island was integrated into a maritime trade network.

In the middle Bronze Age, about 1600 BCE, the “Nuragic” culture emerged, named for the thousands of distinctive stone towers, known as nuraghi. During the late Nuragic period, the archeological and historical record shows the direct influence of several major Mediterranean groups, in particular the presence of Mycenaean, Levantine and Cypriot traders.

The Nuragic settlements declined throughout much of the island as, in the late 9th and early 8th century BCE, Phoenicians originating from present-day Lebanon and northern Palestine established settlements concentrated along the southern shores of Sardinia.

In the second half of the 6th century BCE, the island was occupied by Carthaginians (also known as Punics), expanding from the city of Carthage on the North-African coast of present-day Tunisia, which was founded in the late 9th century by Phoenicians.

Sardinia was occupied by Roman forces in 237 BCE, and turned into a Roman province a decade later. Throughout the Roman Imperial period, the island remained closely aligned with both Italy and central North Africa.

After the fall of the Roman empire, Sardinia became increasingly autonomous, but interaction with the Byzantine Empire, the maritime republics of Genova and Pisa, the Catalan and Aragonese Kingdom, and the Duchy of Savoy and Piemonte continued to influence the island.

Four previous studies have analyzed aDNA from Sardinia using mitochondrial DNA. Ghirotto et al. found evidence for more genetic turnover in Gallura (a region in northern Sardinia with cultural/linguistic connections to Corsica) than Ogliastra. Modi et al. sequenced mitogenomes of two Mesolithic individuals and found support for a model of population replacement in the Neolithic. Olivieri et al. analyzed 21 ancient mitogenomes from Sardinia and estimated the coalescent times of Sardinian-specific mtDNA haplogroups, finding support for most of them originating in the Neolithic or later, but with a few coalescing earlier. Finally, Matisoo-Smith et al. analyzed mitogenomes in a Phoenician settlement on Sardinia and inferred continuity and exchange between the Phoenician population and broader Sardinia. One additional study recovered β-thalessemia variants in three aDNA samples and found one carrier of the cod39 mutation in a necropolis used in the Punic and Roman periods. Despite the initial insights these studies reveal, none of them analyze genome-wide autosomal data, which has proven to be useful for inferring population history.

Here, we generate genome-wide data from the skeletal remains of 70 Sardinian individuals radiocarbon dated to between 4100 BCE and 1500 CE. We investigate three aspects of Sardinian population history:

First, the ancestry of individuals from the Sardinian Neolithic (ca. 5700–3400 BCE)—who were the early peoples expanding onto the island at this time?

our earliest samples show affinity to the early European farmer populations of the mainland, then we observe a period of relative isolation with no significant evidence of admixture through the Nuragic period, after which we observe evidence for admixture with sources from the northern and eastern Mediterranean.

The discussion section of the body text has some key conclusions from the paper, few of which are surprising, but the paper does help clarify, among other things, the non-involvement of Sardinia in the Bell Beaker expansion in the West and Northern Europe.

First, our analysis provides more refined DNA-based support for the Middle Neolithic of Sardinia being related to the early Neolithic peoples of the Mediterranean coast of Europe. Middle/Late Neolithic Sardinian individuals fit well as a two-way admixture between mainland EEF and WHG sources, similar to other EEF populations of the western Mediterranean.

Further, we detected Y haplogroups R1b-V88 and I2-M223 in the majority of the early Sardinian males. Both haplogroups appear earliest in the Balkans among Mesolithic hunter-gatherers and then Neolithic groups and later in EEF Iberians, in which they make up the majority of Y haplogroups, but have not been detected in Neolithic Anatolians or more western WHG individuals. These results are plausible outcomes of substantial gene flow from Neolithic populations that spread westward along the Mediterranean coast of southern Europe around 5500 BCE (a “Cardial/Impressed” ware expansion). We note that we lack autosomal aDNA from earlier than the Middle Neolithic in Sardinia and from key mainland locations such as Italy, which leaves some uncertainty about timing and the relative influence of gene flow from the Italian mainland versus from the north or west. . . .

From the Middle Neolithic onward until the beginning of the first millennium BC, we do not find evidence for gene flow from distinct ancestries into Sardinia. That stability contrasts with many other parts of Europe which had experienced substantial gene flow from central Eurasian Steppe ancestry starting about 3000 BCE and also with many earlier Neolithic and Copper age populations across mainland Europe, where local admixture increased WHG ancestry substantially over time. We observed remarkable constancy of WHG ancestry (close to 17%) from the Middle Neolithic to the Nuragic period. While we cannot exclude influx from genetically similar populations (e.g., early Iberian Bell Beakers), the absence of Steppe ancestry suggests genetic isolation from many Bronze Age mainland populations—including later Iberian Bell Beakers. As further support, the Y haplogroup R1b-M269, the most frequent present-day western European haplogroup and associated with expansions that brought Steppe ancestry into Britain and Iberia about 2500–2000 BCE, remains absent in our Sardinian sample through the Nuragic period (1200–1000 BCE). . . . .In particular, we find that the Nuragic period is not marked by shifts in ancestry, arguing against hypotheses that the design of the Nuragic stone towers was brought with an influx of people from eastern sources such as Mycenaeans.

Following the Nuragic period, we found evidence of gene flow with both northern and eastern Mediterranean sources. We observed eastern Mediterranean ancestry appearing first in two Phoenician-Punic sites (Monte Sirai, Villamar). The northern Mediterranean ancestry became prevalent later, exemplified most clearly by individuals from a north-western Medieval site (San Nicola Necropoli). Many of the post-Nuragic individuals could be modeled as direct immigrants or offspring from new arrivals to Sardinia, while others had higher fractions of local Nuragic ancestry. . . . Overall though, we find support for increased variation in ancestry after the Nuragic period, and this echoes other recent aDNA studies in the Mediterranean that have observed fine-scale local heterogeneity in the Iron Age and later.

In addition, we found present-day Sardinian individuals sit within the broad range of ancestry observed in our ancient samples. A similar pattern is seen in Iberia and central Italy, where variation in individual ancestry increased markedly in the Iron Age, and later decreased until present-day. . . . . the major Phoenician and Punic settlements in the first millennium BCE were situated principally along the south and west coasts, and Corsican shepherds, speaking an Italian-Corsican dialect (Gallurese), immigrated to the northeastern part of Sardinia.

Our inference of gene flow after the second millennium BCE seems to contradict previous models emphasizing Sardinian isolation. These models were supported by admixture tests that failed to detect substantial admixture, likely because of substantial drift and a lack of a suitable proxy for the Nuragic Sardinian ancestry component. However, compared with other European populations, we confirm Sardinia experienced relative genetic isolation through the Bronze Age/Nuragic period.

In addition, we find that subsequent admixture appears to derive mainly from Mediterranean sources that have relatively little Steppe ancestry. Consequently, present-day Sardinian individuals have retained an exceptionally high degree of EEF ancestry and so they still cluster with several mainland European Copper Age individuals such as Ötzi, even as they are shifted from ancient Sardinian individuals of a similar time period.

The Basque people, another population high in EEF ancestry, were previously suggested to share a genetic connection with modern Sardinian individuals. We observed a similar signal, with modern Basque having, of all modern samples, the largest pairwise outgroup-f3 with most ancient and modern Sardinian groups. While both populations have received some immigration, seemingly from different sources, our results support that the shared EEF ancestry component could explain their genetic affinity despite their geographic separation.