Quantum chromodynamics (QCD) is the least precise part of the Standard Model, in practice, mostly because the self-interactions of gluons and the fact that the gluons come in eight "color charge" combinations, make the mathematics involved in solving QCD equations much more difficult than in QED (the Standard Model theory of electromagnetism), and in weak force calculations. It isn't unusual to see QCD predictions made using different approximations that are quite different from each other and from experimental results.

Usually, this is done using an approach known as "lattice QCD" which solves QCD equations by doing numerical approximation of them using discrete N-body simulations of them on a discrete grid representing locations in space iterated at discrete intervals, rather than solving them analytically.

A recent paper uses a version of these methods called 2+1+1 that treats up and down quarks as having their average mass, and treats strange and charm quarks separately, along with certain other assumptions, to predict the masses of the many dozens of possible hadrons with up, down, strange and charm quarks but not the bottom quarks (the heaviest quarks that can be bound into hadrons), or top quarks (which decay too quickly to form hadrons).

The paper does an excellent job of producing accurate results compared to experimental measurements (which are always more accurate and precise than theoretical estimates in QCD). This is shown below in the two money charts from the paper, which also include predictions for heavy baryons (three quark hadrons) which have not yet been characterized experimentally. Those baryon states which have not yet been observed have not yet been seen mostly because they require higher energies to produce which means that there are fewer candidate resonances out there to assemble as a candidate for a potential hadron detection.

These charts show great improvement, for example, over efforts to do the same thing as of a decade or two ago, even though the foundations of QCD were firmly in place by the 1970s, and the relevant quarks to the hadrons discussed in this paper were known to exist back then. 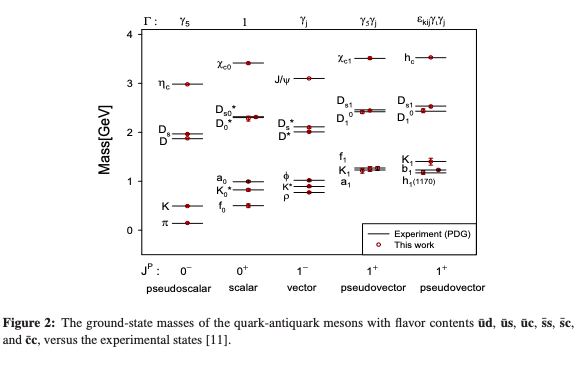 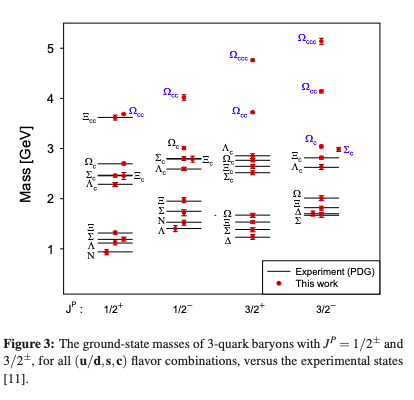