Top Quark Mass At Tevatron Was Too High

Before the Large Hadron Collider (LHC) was up and running, the top quark was discovered at Tevatron, a facility with two experiments, CDF and D0.

The world average value of the top quark mass comes from a combination of both LHC and Tevatron measurements. Currently, the top quark mass estimated from direct measurements such as those in the chart below, according to the Particle Data Group is 172.9 ± 0.4 GeV, and this result would pull it down modestly from that value by a few tenths of a GeV or so to more than 172.5 GeV, but less than the current global average value.

But, a recent reanalysis of the data from D0 found a subtle systemic error in some of the D0 measurements that inflated their measurements of the top quark mass. The impact of correcting this error is shown below. It makes the range of mass measurements much tighter than before and lowers the world average (to the extent that this correction is accepted as correct). 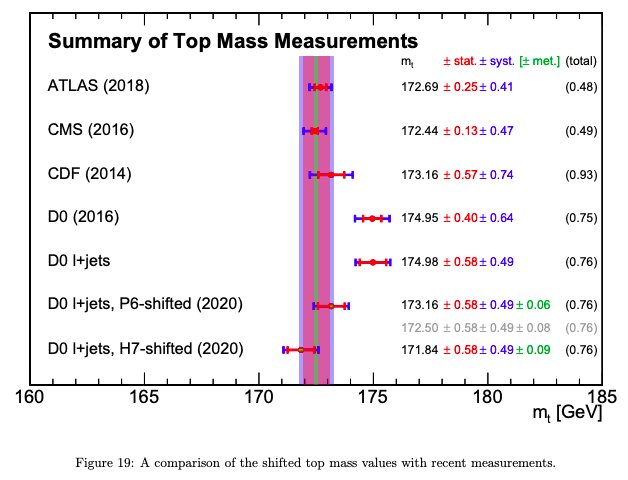