A Pre-Homo Sapiens Hominin Presence In California? Probably Not.

Archaeologists found mastodon bones in San Diego, California that were revealed in connection with road work, that were uranium isotype dated to 130,700 years old plus or minus 9,400 years. So far, unsurprising and nothing different from the kinds of finds that have been coming out of the Le Brea tar pits not far from there for decades.

What is surprising is the claim that has been made about these bones:


Based on several lines of evidence—the way the bones are broken, the way they lay, the presence of large stones that show curious patterns of wear and are out-of-place in the surrounding sediment—the team think that early humans used rocks to hammer their way into the mastodon’s bones. That wouldn’t have been contentious in itself, but the team also claims that the bones from the “Cerruti Mastodon” are 130,000 years old. That would push back the earliest archaeological evidence for humans in North America by a whopping 115,000 years. . . .

To put that in perspective, for decades, the first American settlers were thought to be the Clovis people, who arrived 13,000 years ago. But by discovering older sites with strong evidence of human activity, archaeologists confirmed that the continent had a pre-Clovis presence that dates back 14,600 years—or perhaps even further. Genetic studies have also suggested that modern humans entered America from Asia even earlier, around 23,000 years ago. . . .

They found the mastodon’s bones in a couple of concentrated clusters rather than in a scattered mess. The tops of both thigh-bones had broken off and were lying side-by-side, amid a concentration of other bones. One of the tusks was lying horizontally in the sediment, the other was sticking up vertically. The team think that the remains of a naturally decaying mastodon wouldn’t have ended up in such distinctive patterns—and the bones of nearby bones of wolves and horses certainly didn’t.

And although fragile bones like ribs and vertebrae were still intact, stronger ones like molars and thigh-bones were broken. The fractures aren’t consistent with chewing teeth or trampling feet; instead they look like the breaks you get when you deliberately smash a still-living bone. The team even tried doing this: they smacked modern elephant and cow bones with rocks, and got fractures very similar to the ones on the Cerruti mastodon.

At the site, the team found five large stones (cobbles) amid their clusters of bones, which could have acted as hammers and anvils. These rocks sat in a layer of fine, silt-like sediment, and were far bigger and harder than anything around them. “How did they get there?” says Deméré. “They weren’t being transported by flowing water at the same time as the silt.” Instead, he suggests that they were carried to the site and used to infiltrate the mastodon bones—presumably to get at the marrow within. Sure enough, the rocks showed signs of impact, and the team even managed to fit several detached flakes back onto the “parent” stones.

The gap between the genetic date and the archaeological one is attributed to the "Beringian standstill theory" which holds that the founding population of the Americas entered Beringia around 23,000 years ago, couldn't go further to enter North America from this location due to massive glaciers at the peak of the Last Glacial Maximum, and then started to migrate south to the Americas starting around 15,000 years ago when a gap in the ice emerged.

A date 130,000 years ago would make this find contemporaneous with, or even a few thousand years earlier than, the earliest modern human presence outside of Africa in the Levant and Arabia, and long before any evidence that modern humans had managed to get as far as what is now Turkey, Iran, Pakistan or India.

In other words, if it was a hominin at all, it would probably have to be an archaic hominin, such as Homo Erectus, a Neanderthal, a Denisovan, or a "Hobbit". But, to make the trip to from Siberia to the Pacific Coast of California, you have to pass through the Arctic and near Arctic territory in that vicinity which there is no evidence that "Hobbits" or Homo Erectus ever could.

Now, there is evidence that there were Neanderthals in the Altai Mountains at the Southern rim of Siberia, as late as 100,000 years ago, and Denisovans would also have been in that vicinity in roughly the right time frame, and either of them could have chased herds of megafauna that led them to North America. But, there is no definitive evidence of either Neanderthals or Denisovans east of the Altai, and certain no evidence of either of them in the Americas at any time.

There were indeed some ice ages in the relevant time period. 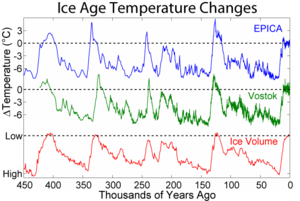 There are alternative potential explanations. Maybe giant sloths or bears figured out how to use very primitive tools. Maybe the bones really were 130,000 years old, but the hominins who tried to break them up and process them with large stones came along 115,000 years later. Maybe the stones were formed by natural processes and the beast that took them down was a bit OCD. But, the huge gap in the archaeological record until this find appears prompts the maxim that extraordinary claims require extraordinary evidence, while the evidence at this sight is highly indirect, highly inferential, and ultimately pretty marginal.

While this is an interesting hypothesis to entertain, and this find is enough to form the basis of a legitimate scientific hypothesis, ultimately, it is too little to support such an extraordinary paradigm shift by itself.
Posted 3:48 PM
Email ThisBlogThis!Share to TwitterShare to FacebookShare to Pinterest
Labels: climate, evolution, history, New World

Could someone have just rafted over accidentally? Like Otokichi.

Perhaps. But, to take down a mammoth and process its remains so systematically and intensively with heavy stones, you would need at least a hunting band, as opposed to a lone individual.

But, in virgin territory awash with big game and no competition from other bands, you'd expect to see something like the Clovis phenomena where the hominin's would suddenly and dramatically expand at an exponential rate in such an abundant environment until they reached Malthusian carrying capacity.

The line between a hunting band that is big enough to take down and process a mammoth but not big enough to expand into virgin territory, and a founding population that explodes in this kind of environment is very thin. But, perhaps if the hunting band that ended up far afield was made up entirely of men, that could explain it. And, given that men don't like to ask for directions, it probably makes more sense that they would end up wildly lost far, far from home, than it does that a gender balanced bunch of hominin nomads would. (Only half joking there).

A rebuttal article is blogged at http://dispatchesfromturtleisland.blogspot.com/2017/08/the-case-against-humans-in-california.html