Hobbits Are Not Dwarf H. Erectus 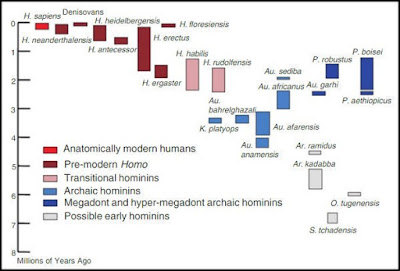 Most people had already rejected the theory that H. florensiensis (Hobbits) were diseased humans. But, this new physical anthropology study rules out the possibility that they are derived from H. erectus, because their bones show more primitive and basal features.

The is notable because it also largely rules out the theory that Hobbits are a subtype of Denisovans or H. heidelbergensis. Instead, it seems likely that they left Africa before or contemporaneously with H. erectus and are closer to H. habilis than any other known species of Homo.

The most comprehensive study on the bones of Homo floresiensis, a species of tiny human discovered on the Indonesian island of Flores in 2003, has found that they most likely evolved from an ancestor in Africa and not from Homo erectus as has been widely believed. The study by The Australian National University (ANU) found Homo floresiensis, dubbed "the hobbits" due to their small stature, were most likely a sister species of Homo habilis -- one of the earliest known species of human found in Africa 1.75 million years ago.

Data from the study concluded there was no evidence for the popular theory that Homo floresiensis evolved from the much larger Homo erectus, the only other early hominid known to have lived in the region with fossils discovered on the Indonesian mainland of Java. . . .

Homo floresiensis is known to have lived on Flores until as recently as 54,000 years ago.
The study was the result of an Australian Research Council grant in 2010 that enabled the researchers to explore where the newly-found species fits in the human evolutionary tree.

Where previous research had focused mostly on the skull and lower jaw, this study used 133 data points ranging across the skull, jaws, teeth, arms, legs and shoulders.

Dr Argue said none of the data supported the theory that Homo floresiensis evolved from Homo erectus.

"We looked at whether Homo floresiensis could be descended from Homo erectus," she said.

"We found that if you try and link them on the family tree, you get a very unsupported result. All the tests say it doesn't fit -- it's just not a viable theory."

Dr Argue said this was supported by the fact that in many features, such as the structure of the jaw, Homo floresiensis was more primitive than Homo erectus.

"Logically, it would be hard to understand how you could have that regression -- why would the jaw of Homo erectus evolve back to the primitive condition we see in Homo floresiensis?"

Dr Argue said the analyses could also support the theory that Homo floresiensis could have branched off earlier in the timeline, more than 1.75 million years ago.

"If this was the case Homo floresiensis would have evolved before the earliest Homo habilis, which would make it very archaic indeed," she said.

"When we did the analysis there was really clear support for the relationship with Homo habilis. Homo floresiensis occupied a very primitive position on the human evolutionary tree," Professor Lee said.

"We can be 99 per cent sure it's not related to Homo erectus and nearly 100 per cent chance it isn't a malformed Homo sapiens," Professor Lee said.

Although the diminutive Homo floresiensis has been known for a decade, its phylogenetic status remains highly contentious. A broad range of potential explanations for the evolution of this species has been explored. One view is that H. floresiensis is derived from Asian Homo erectus that arrived on Flores and subsequently evolved a smaller body size, perhaps to survive the constrained resources they faced in a new island environment. Fossil remains of H. erectus, well known from Java, have not yet been discovered on Flores. The second hypothesis is that H. floresiensis is directly descended from an early Homo lineage with roots in Africa, such as Homo habilis; the third is that it is Homo sapiens with pathology.

We use parsimony and Bayesian phylogenetic methods to test these hypotheses. Our phylogenetic data build upon those characters previously presented in support of these hypotheses by broadening the range of traits to include the crania, mandibles, dentition, and postcrania of Homo and Australopithecus.


The [Hobbit] skull was astonishingly small: around just 400 cubic centimetres. This was a good 200cc less than the cranial capacity of any fossils then included in our our genus, Homo. Just for comparison, your brain will measure somewhere between 1,000 and 2,000cc. . . . Earlier Homo erectus specimens were known from east and South-East Asia. Perhaps, suggested some researchers, the Flores hominin was an offshoot of Homo erectus, and had undergone “island dwarfing”. Other experts were not so sure; the anatomy of Homo floresiensis seemed too primitive. . . .The shape of the pelvis and the proportions of the limbs looked primitive – reminiscent of australopithecines, or the earliest of human species, Homo habilis, from around 2-3m years ago. But those hominins only ever lived in Africa … as far as we know. . . .

The Flores hominins were, more clearly than ever, rooted deep in that tree: they could not be descendants of Homo erectus. They came from something more primitive – a close cousin of Homo habilis. But what was an ancient-looking hominin like this doing in Indonesia?

In the most widely accepted model of human evolution today, the first emergence of hominins out of Africa involved Homo erectus, and happened some time after 2m years ago. But Homo floresiensis raises the tantalising possibility of an earlier expansion of hominins – who were probably not-quite-Homo – out of Africa.

We know, from reconstructions of ancient climate and geography that it certainly would have been possible for hominins to emerge from Africa as far back as 3m years ago. In fact, other large mammal species – including elephants – did just that.

From The Conversation. Another discussion at the same site notes that a different study found a fit with H. Erectus that this study rejects.

The link on the words "climate and geography" above is to the following review article (whose abstract, unfortunately offers more tease than substance).


The past decade has seen the Pliocene and Pleistocene fossil hominin record enriched by the addition of at least ten new taxa, including the Early Pleistocene, small-brained hominins from Dmanisi, Georgia, and the diminutive Late Pleistocene Homo floresiensis from Flores, Indonesia. At the same time, Asia's earliest hominin presence has been extended up to 1.8 Myr ago, hundreds of thousands of years earlier than previously envisaged. Nevertheless, the preferred explanation for the first appearance of hominins outside Africa has remained virtually unchanged. We show here that it is time to develop alternatives to one of palaeoanthropology's most basic paradigms: ‘Out of Africa 1’.

Meanwhile the brain of H. Naledi is called tiny but advanced.

The following interesting and relevant pre-print was identified by Ryan in the comments:

According to the pre-print an introgression from an unknown archaic hominin which diverged from modern humans approximately 859,000 years ago is "close to the reported divergence time between Africans and the ancestors of Neanderthals and Denisovans." It further concluded that "segments bore much higher similarity to Neanderthal than to Denisovan genomes." It goes on to infer that these segments are derived from an archaic hominin species that is a Neanderthal or Neanderthal-like.

With regard to the mysterious Class 3 segments that have the much older divergence date, the paper notes that:

Overall, 37.1% of class3 segments were adjacent to a class2N segment. Simulation results did not support the hypothesis that class3N and class2N introgressed independently into the Eurasian genome (see Material and Methods). A majority (86.5%) of the class3N segments bore high similarity (>80%) to the Neanderthal genome. Thus, our results suggested that the class3N segments of unknown archaic hominins introgressed into the Eurasian 7 genome via the Neanderthal genome introgression, together with the class2N segments.

We observed only one module (close to a similarity=1) in the distribution of pairwise similarities among the overlapping segments of class3. This finding suggested that class3 segments could be attributed to a single archaic hominin, which we refer to as hominin-E. We hypothesized that four possible models might explain the introgression from hominin-E to modern humans and Neanderthals (see Discussion). The most parsimonious model held that a single introgression occurred from hominin-E to the ancestors of modern humans and Neanderthals. This explanation was consistent with the reported results that an archaic hominin (Tafr>1 Mya) contributed to the Denisovan genome. . . .

Therefore, the observed overlapping class3N and class3E segments could be derived from a hominin-E introgression, which occurred before the divergence of modern humans and Neanderthals. Thus, the scenarios described in Figures S9A, S9B, and S9C are unlikely, because they could not explain the overlapping regions between class3N and class3E segments. Because 32.1% of class3N did not overlap with class3E and 71.5% of class3E did not overlap with class3N, modern humans and Neanderthals might have received an additional hominin-E introgression after their divergence. Therefore, the scenarios in Figures S9E, S9F, S9G are possible. Furthermore, the scenario in Figure S7D is also possible, because the non-overlapping regions of class3N and class3E segments could be explained by genetic drift after the divergence of modern humans and Neanderthals.

In late breaking news: The Homo naledi find has been determined to be just 200,000 to 300,000 years old according to a National Geographic interview with the investigator, although the formal journal paper setting forth the methodology by which this was determined has not been released. Also, an independent Homo naledi site has been found not far from the original one. This is much later than anticipated based upon the extent to which the remains appeared to be basal as opposed to derived relative to other archaic hominin finds.
Posted 4:01 PM
Email ThisBlogThis!Share to TwitterShare to FacebookShare to Pinterest
Labels: climate, evolution

I'd just like to plug this paper again, and point out that the minor admixture into modern humans (or rather our ancestors) from a source that diverged from us 3,464 kya seems to match pretty well.

See the discussion about "class3" sequences.

Thanks for the tip.