From the LGM to the Younger Dryas

The Last Glacial Maximum (LGM) was the low point of the last major ice age and took place ca. 18,000 BCE. At that time, most of Europe, Siberia and North America were covered with thick glaciers, human in Europe were confined to three small refugia.

The water used in the glaciers and associated polar ice packs greatly lowered the sea level on Earth, connecting the British Isles and Continental Europe with a land bridge; giving rise to a land bridge across the Bering Strait; connecting many islands in island Southeast Asia to each other and the mainland; connecting Papua New Guinea, Australia and the island of Tasmania; making the water passage to the Andaman Island from mainland Southeast Asia much less daunting; and making it easier to reach Japan from mainland East Asia.

As the Earth warmed up again following the LGM, sea levels rose and the glaciers retreated. This allowed the founding population of the Americas expanded from Beringia into North and South America (ca. 12,000-13,000 BCE), and hunter-gatherers from the European refugia and the Near East repopulated Europe, while those hunter-gatherers and others from Asian refugia repopulated Siberia. Populations in the Americas were isolated from the rest of the world. Island Southeast Asians were isolated from mainland Asia and each other. Papua New Guinea was isolated from Australia. And, the Andaman Islands and Japan became more inaccessible from the mainland. Proto-farming was starting to develop in the Fertile Crescent in the Near East (Mesopotamia, Anatolia and the Levant).

Just as the climate was becoming tolerable for farming in many places, the Younger Dryas event occurred. This was a sudden, global, extreme cooling event that started around 10,800 BCE and lasted about 1400 years. This plunged the world into another severe ice age, although not quite as deep an ice age as the LGM. As noted by an author of a paper discussed last month at this blog:

"[T]he Younger-Dryas coincides with the end of Clovis culture and the extinction of more than 35 species of ice-age animals. Moore says while evidence has shown that some of the animals were on the decline before Younger-Dryas, virtually none are found after it. Moore says that would indicate an extinction event for North America." The animals that went extinct included the mastodon, mammoth and saber-toothed tiger.

So climate change, as well as overhunting, appears to have played an important part in the North American megafauna extinction.

Global deposits of rare elements at the time of the Younger Dryas event similar to those found at the CT boundary created by the comet that destroyed the dinosaurs ca. 65 million years ago have made it increasingly clear that the Younger Dryas event was also caused by an extraterrestrial impact, probably by a comet or asteroid about two-thirds of a mile (one kilometer) in diameter, probably originating in the the Taurid meteor stream given its timing, which has now been established quite precisely. 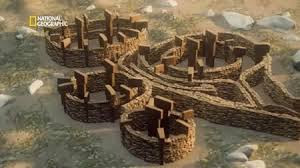 A National Geographic artists impression of Göbekli Tepe shortly after it was completed.

The Göbekli Tepe in Southeast Anatolia is a sophisticated stone edifice with carved imagines on it that is arguably the earliest temple or astronomical monument in the world. It is located atop a mountain ridge in the Southeastern Anatolia Region of modern-day Turkey, approximately 12 km (7 mi) northeast of the city of Şanlıurfa, not far north of the middle of the border between Syria and Turkey. The tell has a height of 15 m (49 ft) and is about 300 m (980 ft) in diameter. It is approximately 760 m (2,490 ft) above sea level. It is near the northern peak of the Fertile Crescent.

This is particularly notable because it was built by hunter-gathers before crops or farm animals had been domesticated (although domesticated dogs did exist by that point). Its construction coincides with the Younger Dryas event and it was used for about 2,000 years thereafter (i.e. until about 8,000 BCE) this time period corresponds the the archaeological periods in the Near East known as Pre-pottery Neolithic A (PPNA) and Pre-pottery Neolithic B (PPNB).

We have interpreted much of the symbolism of Göbekli Tepe in terms of astronomical events. By matching low-relief carvings on some of the pillars at Göbekli Tepe to star asterisms we find compelling evidence that the famous ‘Vulture Stone’ is a date stamp for 10950 BC ± 250 yrs, which corresponds closely to the proposed Younger Dryas event, estimated at 10890 BC. We also find evidence that a key function of Göbekli Tepe was to observe meteor showers and record cometary encounters.

Martin B. Sweatman and Dimitrios Tsikritsis, "Decoding Göbekli Tepe with archaeoastronomy: What Does The Fox Say?", 17(1) Mediterranean Archaeology and Archaeometry, 233-250 (2017).

Hat tip to Dienekes' Anthrpology Blog. The title of the paper is a silly allusion to a cult classic cute little pop song with international distribution by international artist Ylvis, who has an interest in archaeological (having also written a song about Stonehenge), whose lyrics discuss the sounds that various kinds of animals make, as well as a reference to one of the carvings at the monument.

The body text associates the Fox in the imagery with the Northern Taurids and the Northern Aquarius constellation and assigns all of the other animals except the snakes and headless human as symbols for either constellations (a.k.a. asterism) or pole stars. The suspected pole stars, with which the site is aligned, were several thousand years past the point when they actually marked true north, suggesting an astronomy tradition that dated back thousands of years. The associations of symbols with constellations is supported by the fact that they appear in astronomical order. "Handbag" symbols are interpreted as sunsets, given the orientation of the stones.

The v shapes and snakes are suspected to be symbols of comets, and in particular, a known comet whose path is discussed. The headless human is associated with a catastrophe at the time of the Younger Dryas and other symbolism is associated with ash clouds blocking the sky.

The lengthy period of about two thousand years over which the site was built and used suggests that the symbols were being used as a form of astronomy protolanguage, and there are allusions to corresponding use of the same symbols at other sites which are not explored in detail.

The overall site suggests a particular concern with the Taurid meteor shower that was probably the source of the Younger Dryas object.

Overall the presentation is quite convincing and also gives you a feel for the motives and worldview of the people who built this observatory/temple. There appear to have been sacrificial offerings of animals corresponding to the constellations in question.
Posted 5:05 PM
Email ThisBlogThis!Share to TwitterShare to FacebookShare to Pinterest
Labels: anthropology, astronomy, climate, history