I wasn't inspired to do anything for April Fool's Day this year, but here's a stranger than fiction tidbit of reality. 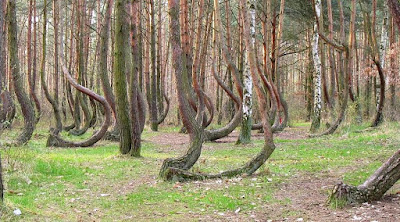 In Poland’s Krzywy Las, or Crooked Forest, the pine trees look like potbellied stick figures. On some 400 trees, the trunks buckle out 90 degrees, creating bark-covered bellies that drag just above the earth, oddly, all pointing in the same direction — north.

No one knows for certain what caused this unusual stand of trees in a protected forest, just outside the town of Gryfino, Poland. The town was mostly destroyed during World War II, and the truth of the forest was lost with it. . . .

The pine trees, thought to have been planted in the early 1930s, bend at the trunks, and some extend outward around three to nine feet before zipping back up into the air. The trees — around 50 feet high at their tallest — were probably damaged at an early age, causing them to permanently grow this way. But how? . . .

It’s possible that a heavy snowfall covered the trees and continued to weigh them down through spring, when buds sprouted up and grew from the snow-covered trunk. But this wouldn’t explain the straight pines that surround this patch of bent ones.

The prevailing hypothesis is that farmers manipulated the trees in the 1930s to use their bent wood for furniture or ship building, but that the war prevented them from following through.

From the New York Times.
Posted 11:25 AM
Email ThisBlogThis!Share to TwitterShare to FacebookShare to Pinterest
Labels: anthropology, biodiversity, climate, history