A new study of the remains of 38 people in a mass grave from 6200 years ago in Croatia provides evidence of the mass execution of the all or most of the residents of a small copper age farming villages who were predominantly descended from Anatolian Neolithic farmers.

We don't know why it happened, but the fact that it did belies the myth that early farming civilizations were peaceful utopias. 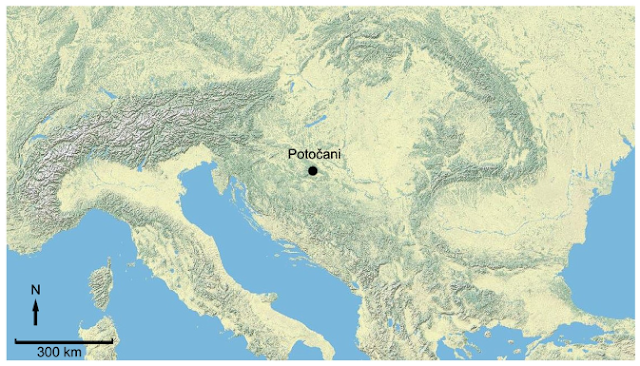 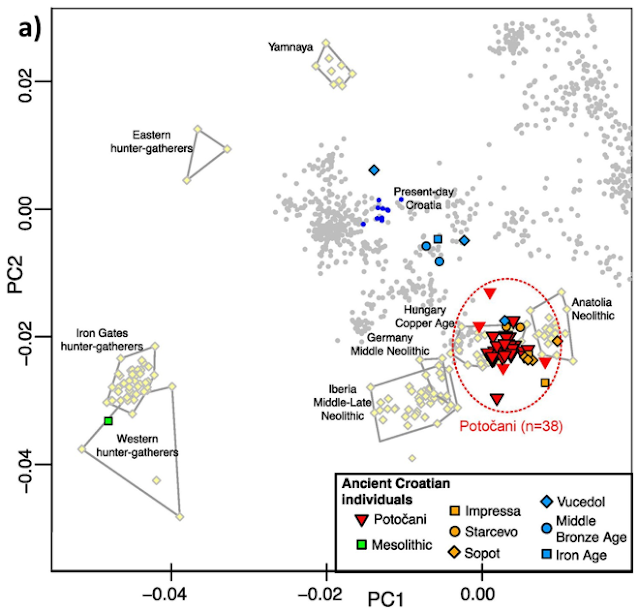 Mario Novak and his colleagues have just published a paper entitled: Genome-wide analysis of nearly all the victims of a 6200 year old massacre. They sequenced the genome of 38 of the 41 individuals found in a mass grave 2m in diameter and 1m deep in Potočani, Croatia.

. . .
Radiocarbon dating measurements showed that these skeletons date from 4200 BC. JC. corresponding to the Eneolithic (copper age) culture of Lasinja. Anthropological analyzes have shown that thirteen of these individuals (six children, three men and four women) presented with peri-mortem cranial injuries located on the side or back of the head which suggest a single summary execution event.
The genetic results indicate that all of these individuals show a very homogeneous ancestry.

On average, these individuals have 91% of farming ancestry from Anatolia and 9% of hunter-gatherer ancestry from the west. They have no ancestry at all from the pastoralists of the steppes. . . . These results are confirmed by the analysis of the haplogroups of the Y chromosome: G2, I2 and C-V20, and in particular the absence of the haplogroups R1a and R1b-M269. There are in particular six different paternal lineages. In addition, analysis of mitochondrial haplogroups identifies 30 different haplotypes suggesting a large community. . . . only eleven individuals present close relationships (up to the third degree), thus forming 4 families:
* a man, his two daughters and his nephew
* two sisters with a third cousin
* A father and his son
* a boy with his paternal aunt (or his half-sister)
This group of people does not therefore correspond to a single extended family because 70% of them have no family relationship. In addition, among all the individuals there are 20 female and 18 male. This massacre therefore does not correspond to the result of a battle but rather to the extermination of a village community made up of many different families.
Analysis of the homozygosity segments indicates that there is very little inbreeding among these individuals.

My opinon as an individual, is violence is a basic part of our genetic makeup. Just the fact, we mentally frame struggles in our life the same way we frame actual violence, is prove of that.

Only Idealistic archaeologists think aggression is socially constructed and modern.

We have found many Neolithic massacres now. There's several in LBK, Globular Amphora, Croatia, I've heard of several others too.

Polished Axe was a new Neolithic weapon. It was also execution weapon. Strike to the back to head. That's what they did.

92% Anatolian? That's a lot for 4200 BC, which is two thousand years after they arrived in Southeastern Europe.

This adds to our "farmer" DNA database. So far it looks like farmers in Southeastern Europe & Italy had low amounts of hunter gatherer ancestry. 10-15% usually.

What happened to the hunter gatherers of Southern Europe (excluding Spain)?

The whole article is worth reading, with lots of unanswered questions. The following excerpt was particularly interesting, and reminds me of the Rwandan genocide:

...According to some authors [e.g. 20] massacres are characterized by a mental complex which involves debasing and destroying the victims usually viewed by the perpetrators as “others”; only after this process is finished the victims are killed [20]. In other words, leaders blame a certain group for the suffering and hardships present in the society as a whole while suggesting that the situation will improve after the group is eliminated [20]. Channeling community anxiety into fear of the targeted group results in hatred for the group, the “others”, with hatred finally transforming into a desire to eliminate the feared “others”. An additional important aspect that may contribute to the massacre of innocent noncombatants is the process of identity construction and dehumanization of the “others” where they are perceived as a threat and leading to the idea that they must be destroyed in order to save society [20]...