This is probably the most precise measurement of a physical constant ever made in human history, down to 81 parts per trillion. In decimal form, this dimensionless constant has an experimentally measured value of 0.007297512320348.

Troublingly, however, the abstract of the paper notes that: "Our value of the fine-structure constant differs by more than 5 standard deviations from the best available result from caesium recoil measurements." All other measurements of this constant mentioned in the paper are consistent with both of the divergent measurements at the two sigma (two standard deviation) level. This means that one or the other high precision measurements is almost certainly understates its actual margin of error (which has more than a dozen subcomponents). The magnitude of the discrepancy, which is a little more than one part per billion, is still modest, however, when not normalized to the estimated margins of error of the respective measurements. If the actual margins of error were understated by a bit more than a factor of two and a half, the results would be consistent with each other. 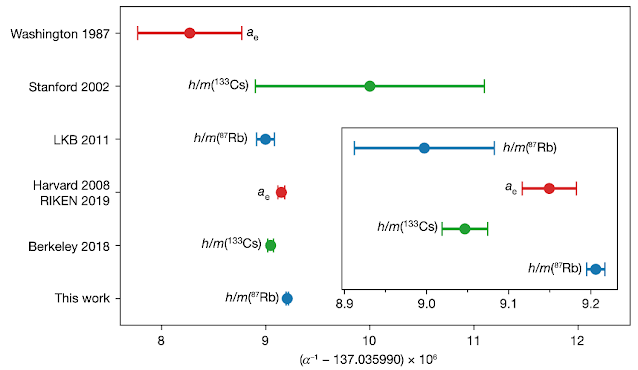 Researchers at the Kastler Brossel Laboratory in Paris have made the most precise measurement of one of the fundamental constants, called the fine-structure constant, providing physicists with a vital tool to verify the consistency of their most cherished theoretical models.

The fine-structure constant determines the strength of the electromagnetic force, and is central in explaining a number of phenomena including the interactions between light and charged elementary particles such as electrons. It is an important part of the equations of the Standard Model, a theory that predicts and describes all the known fundamental forces other than gravity—namely electromagnetism as well as the weak and strong nuclear forces. The team in Paris measured the value of the fine-structure constant as 1/137.035999206(11), to an accuracy of 11 digits. The result appears in a study published in Nature.