The Large Hadron Collider's purge of beyond the Standard Model theories that predict new phenomena at energy scales from the electroweak scale (up to about 246 GeV) to about ten times that energy scale continues.

Diphoton decay outcomes were key in discovering the Standard Model Higgs boson, even though they make up a fairly small share of Higgs boson decays, because not many Standard Model particle decays produce them, so there are few backgrounds that have to be statistically deducted from what is observed and those that are seen are well defined. So, any unknown physical processes that produce them would be easy to see. And, some of the leading benchmark models for new physics that the LHC routine looks for produce them.

The ATLAS experiment at the Large Hadron Collider has largely ruled out electromagnetically neutral heavy Higgs bosons (which are predicted in all supersymmetric models and all models with more than one Higgs doublet) with masses from 160 GeV to 2800 GeV. Many supersymmetric "sparticles" also have spin-0 are are predicted in SUSY models to have diphoton decays as do models with neutral Z' bosons. They are ruled out for masses from 160 GeV to 2800 GeV as well. Spin-2 massive gravitons predicted by the the Randall–Sundrum model with masses of up to 4500 GeV are also ruled out.

The absence of this evidence is a big problem, for example, for E6 exceptional group based grant unifications theories which are among the most popular grand unification theories:

Signatures of E6 include [an] extension of the Higgs sector; existence of neutral Z' gauge bosons at masses above the electroweak scale. . . ; the production of new vector-like quarks and leptons, and manifestations of the neutral fermion. . . through its mixing with other neutral leptons, giving rise to signatures of “sterile” neutrinos. Up to now, with the possible exception of weak evidence for sterile neutrinos there has been no indication of the extra degrees of freedom entailed by the 27-plet of E6.

Searches for new resonances in high-mass diphoton final states with the ATLAS experiment at the LHC are presented. The searches use the full LHC Run 2 proton–proton collision dataset at a centre-of-mass energy of √ 𝑠 = 13 TeV, corresponding to an integrated luminosity of 139 fb−1 . The analyses are optimized to search for spin-0 resonances with masses above 200 GeV and for spin-2 resonances predicted by the Randall–Sundrum model with masses above 500 GeV.
The data are consistent with the Standard Model background expectation. In the spin-0 resonance search, the observed 95% CL upper limits on the fiducial cross-section times branching ratio for a narrow-width signal range from 12.5 fb at 160 GeV to about 0.03 fb at 2800 GeV.  In the spin-2 resonance search, the observed limits on the total cross-section times branching ratio for 𝑘/𝑀Pl = 0.1 range from 3.2 fb to about 0.04 fb for a graviton mass between 500 and 5000 GeV, and the RS1 graviton is excluded for masses below 4500 GeV for this coupling .

The February 26, 2021 pre-print whose vacuous abstract adds nothing to the quoted language from its conclusion above is here.

So, the range of an RS1 graviton would be about 32,000 times smaller than the pion carried part of the nuclear binding force (and about 50 times smaller than the range of the weak force) and would never manage to get from even one quark to another within a proton, neutron, pion, or other hadron made up of quarks, and is also far too unstable to be a dark matter candidate. It would, however, provide a candidate for a milli-charged interaction with ordinary matter for a non-self-interacting dark matter candidate that interacted in a feeble non-gravitational way with ordinary matter at a strength much less than neutrinos.

Another pre-print carefully details the ways that the LHC has not been kind of composite Higgs boson models, which, generically, should produce some properties different from the Standard Model Higgs boson. Two tables from the paper summarize the experiment bounds from the CMS and ATLAS experiments on such deviations: 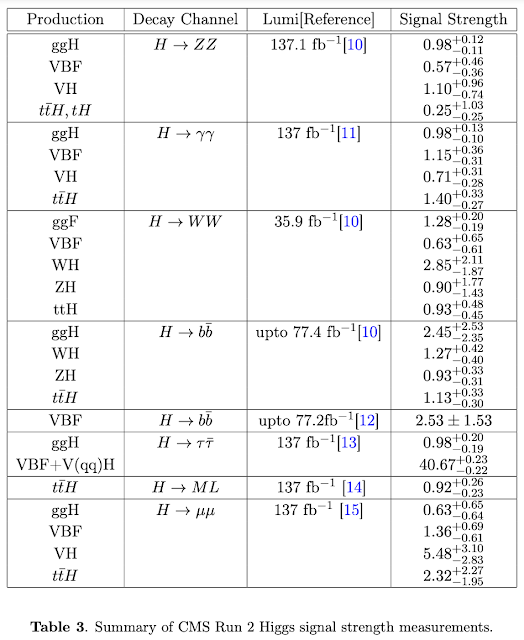 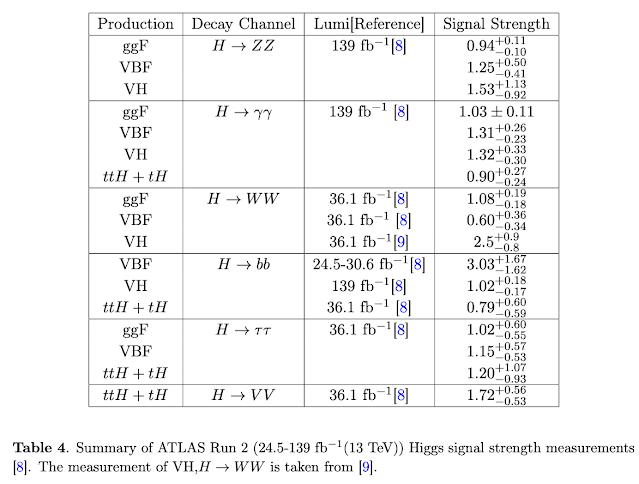 A portion of the abstract of a new preprint from BESIII also reminds us why we search:

The Standard Model (SM) of particle physics, comprised of the unified electro-weak (EW) and Quantum Chromodynamic (QCD) theories, accurately explains almost all experimental results related to the micro-world, and has made a number of predictions for previously unseen particles, most notably the Higgs scalar boson, that were subsequently discovered. As a result, the SM is currently universally accepted as the theory of the fundamental particles and their interactions.

However, in spite of its numerous successes, the SM has a number of apparent shortcomings including: many free parameters that must be supplied by experimental measurements; no mechanism to produce the dominance of matter over antimatter in the universe; and no explanations for gravity, the dark matter in the universe, neutrino masses, the number of particle generations, etc. Because of these shortcomings, there is considerable incentive to search for evidence for new, non-SM physics phenomena that might provide important clues about what a new, beyond the SM theory (BSM) might look like.

Extensions of the Standard Model are likely to address some of these issues. Specifically:

* many free parameters that must be supplied by experimental measurements

* the number of particle generations.

But others issues are more likely to come from quantum gravity and/or cosmology developments:

* no explanations for gravity, and

* the dark matter in the universe.