The Antikythera Mechanism is an ancient Greek machine that used metal gears to generate astronomy predictions from a massive accumulated data set of naked eye observations of the Sun, the Moon, the planets and stars, fitted to an imperfect model to explain them. As Wikipedia explains:

The Antikythera mechanism (/ˌæntɪkɪˈθɪərə/ AN-tih-kih-THEER-ə) is an ancient Greek hand-powered orrery, described as the first analogue computer, the oldest known example of such a device used to predict astronomical positions and eclipses for calendar and astrological purposes decades in advance. It could also be used to track the four-year cycle of athletic games which was similar to an Olympiad, the cycle of the ancient Olympic Games.
This artefact was retrieved from the sea in 1901, and identified on 17 May 1902 as containing a gear by archaeologist Valerios Stais, among wreckage retrieved from a shipwreck off the coast of the Greek island Antikythera. The instrument is believed to have been designed and constructed by Greek scientists and has been variously dated to about 87 BC, or between 150 and 100 BC, or to 205 BC, or to within a generation before the shipwreck, which has been dated to approximately 70–60 BC.
The device, housed in the remains of a 34 cm × 18 cm × 9 cm (13.4 in × 7.1 in × 3.5 in) wooden box, was found as one lump, later separated into three main fragments which are now divided into 82 separate fragments after conservation efforts. Four of these fragments contain gears, while inscriptions are found on many others. The largest gear is approximately 13 centimetres (5.1 in) in diameter and originally had 223 teeth.
It is a complex clockwork mechanism composed of at least 30 meshing bronze gears. In 2008, a team led by Mike Edmunds and Tony Freeth at Cardiff University used modern computer x-ray tomography and high resolution surface scanning to image inside fragments of the crust-encased Mechanism and read the faintest inscriptions that once covered the outer casing of the machine.
Detailed imaging of the mechanism suggests that it had 37 gear wheels enabling it to follow the movements of the Moon and the Sun through the zodiac, to predict eclipses and to model the irregular orbit of the Moon, where the Moon's velocity is higher in its perigee than in its apogee. This motion was studied in the 2nd century BC by astronomer Hipparchus of Rhodes, and it is speculated that he may have been consulted in the machine's construction.
The knowledge of this technology was lost at some point in antiquity. Similar technological works later appeared in the medieval Byzantine and Islamic worlds, but works with similar complexity did not appear again until the development of mechanical astronomical clocks in Europe in the fourteenth century. All known fragments of the Antikythera mechanism are now kept at the National Archaeological Museum in Athens, along with a number of artistic reconstructions and replicas of the mechanism to demonstrate how it may have looked and worked.

Using incomplete fragments of it, written accounts, and related interdisciplinary inputs like knowledge of ancient astronomy and mathematics and metal working, scientists and scholars have recreated a design which is pretty much the only possible solution that can fit the available data about the complete design of it.

Many previous attempts since 1906 have failed attempting to do the same thing. 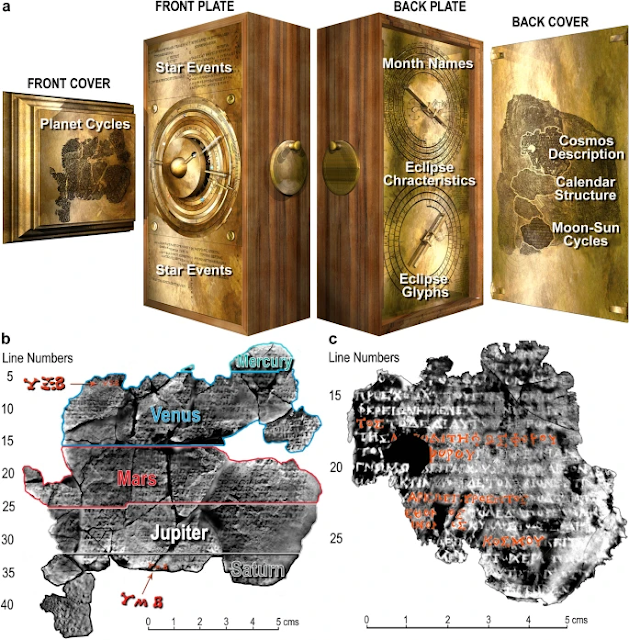 The Antikythera Mechanism is a cultural treasure that has engrossed scholars across many disciplines. It was a mechanical computer of bronze gears that used ground-breaking technology to make astronomical predictions, by mechanizing astronomical cycles and theories.

We wanted to determine the cycles for all the planets in this Cosmos (not just the cycles discovered for Venus and Saturn); to incorporate these cycles into highly compact mechanisms, conforming to the physical evidence; and to interleave them so their outputs correspond to the customary cosmological order (CCO), described below. Here we show how we have created gearing and a display that respects the inscriptional evidence: a ring system with nine outputs—Moon, Nodes, Mercury, Venus, Sun, Mars, Jupiter, Saturn and Date—carried by nested tubes with arms supporting the rings. The result is a radical new model that matches all the data and culminates in an elegant display of the ancient Greek Cosmos. With so much missing, we ensure the integrity of our model with a strict set of Reconstruction Principles and we assess the strength of data that validates each element. The loss of evidence might suggest many options for a model. What has struck us forcefully in making the present model is just how few these options are: the constraints created by the surviving evidence are stringent and very difficult to meet.

Previous research unlocked the ingenuity of the Back Dials, here we show the richness of the Cosmos at the front. The main structural features of our model are prescribed by the physical evidence, the prime factors of the restored planetary period relations and the ring description in the BCI. Hypothetical features greatly enhance and justify the Cosmos display: a Dragon Hand thematically linking the Front and Back Dials; and an Index Letter Scheme for the synodic events of the planets.
Because of the loss of evidence, we cannot claim that our model is a replica of the original, but our solution to this convoluted 3D puzzle draws powerful support from the logic of our model and its exact match to the surviving evidence.

The Antikythera Mechanism was a computational instrument for mathematical astronomy, incorporating cycles from Babylonian astronomy and the Greek flair for geometry. It calculated the ecliptic longitudes of the Moon, Sun and planets; the phase of the Moon; the Age of the Moon; the synodic phases of the planets; the excluded days of the Metonic Calendar; eclipses—possibilities, times, characteristics, years and seasons; the heliacal risings and settings of prominent stars and constellations; and the Olympiad cycle—an ancient Greek astronomical compendium of staggering ambition.

It is the first known device that mechanized the predictions of scientific theories and it could have automated many of the calculations needed for its own design —the first steps to the mechanization of mathematics and science. Our work reveals the Antikythera Mechanism as a beautiful conception, translated by superb engineering into a device of genius.