Things That Make You Think The Standard Model Is True

It is easy to forget just how stunning accurate and predictive what we already know about fundamental physics is, as we obsess over the handful of moderate tensions between experiment and prediction that are outstanding. This post discusses one random example of this reality.

There are hundreds of different possible hadrons, each with several main decay paths and many more rare ones each, whose frequency is predicted in each case.

It is rare because the process is only possible when it occurs through multiple intermediate "virtual" steps called "electroweak box and penguin diagrams" the most important of which involve top quarks, that cancel out leaving no direct trace in the end products. This decay can't happen at "tree level" without these "loop effects".

In their sample of about  120 billion charged kaon decays for which they were able to characterize decay products, that corresponds to 10 events (net of background events) predicted by the Standard Model. The error budget in the predicted Standard Model calculation is as follows: 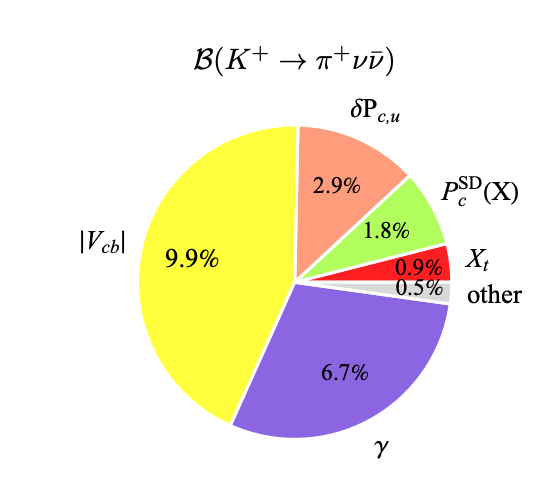 V(cb) and γ are physical constants that are part of the CKM matrix, representing the probability of transitions from bottom quarks to charm quarks in weak force mediated transitions (the constant is 0.0410 ± 0.0014, and the probability of that transition is the square of that constant) and one of the angles of its unitary triangle which is a function of the various CKM matrix elements taken as a whole (which is 73.2º + 6.3º - 7.0º). 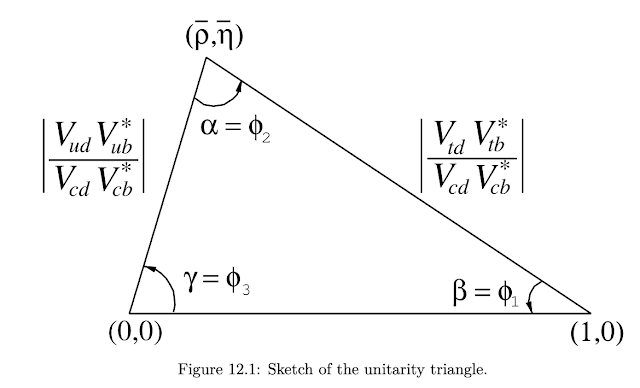 Keep in mind, that this is a genuine ex ante prediction. While the calculation was done in 2015 (still prior to the data collection), the equations used were derived in the early 1980s, and the physical constants used were all determined experimentally in completely independent experiments, done long in advance and refined from time to time in independent experiments. Yet, this tiny needle in a haystack measurement is still consistent with the prediction, and was first possible with data collected in 2016-2018.

This decay has indeed been observed (the odds that this is due simply to random chance fluctuations in background processes is 34 per 100,000) and happens at a frequency between 36 and 188 time per trillion charged kaon decays (with 95% confidence intervals) with a best fit value of 106 times per trillion, based upon an observed 20 events with a background expected to average 7 events, leaving a signal of 13 events (compared to the predicted 10 event signal). This number of events is consistent with the Standard Model prediction at the two standard deviation level.

As the introduction to the paper explains:

The K^+ → π +νν¯ decay is a Flavour Changing Neutral Current (FCNC) process that proceeds at the lowest order in the Standard Model (SM) through electroweak box and penguin diagrams, both dominated by t-quark exchange. The quadratic Glashow-Iliopoulos-Maiani (GIM) mechanism and the transition from a top to a down quark make this process extremely rare. Using tree-level elements of the Cabibbo-Kobayashi-Maskawa (CKM) matrix as external inputs, the SM predicts the branching ratio to be BR = (8.4 ± 1.0) × 10^−11, where the uncertainty is dominated by those of the CKM parameters V(cb) and γ. The intrinsic theoretical uncertainty is 3.6%, related to the uncertainty of the NLO (NNLO) QCD corrections to the top (charm) quark contribution and NLO electroweak corrections. The uncertainties due to the hadronic matrix element governing the K–π transition are negligible, because they are evaluated using the precisely measured branching ratio of K^+ → πº e^+ ν, corrected for isospin-breaking and non-perturbative effects[.]

This measurement is also used to set limits on BR(K+ → π +X), where X is a scalar or pseudo-scalar particle. Details are given of the analysis of the 2018 data sample, which corresponds to about 80% of the total data sample.

NA62 Collaboration "Measurement of the very rare K+→π+νν¯ decay" arXiv 2103.15389 (March 29, 2021).
Footnote on Dark Matter
The paper also sets strict constraints on potential number of spin-0 dark matter candidates "X" with masses of up to about twice the mass of a pion (260 MeV) that can be produced in charged kaon decays that could be produced in this process:

This result is also interpreted in the framework of a search for a feebly interacting scalar or pseudo-scalar particle X, produced in the decay K^+ → π +X with the same experimental signature as the dominant background process K^+ → π +νν¯. Upper limits on the branching ratio at 90% CL of 3–6 ×10^−11 are obtained for m(X) masses in the range 0–110 MeV/c^2 and 1 × 10^−11 for mX masses in the range 160–260 MeV/c^2 . A particular model where X is a dark sector scalar mixing with the Higgs boson has been explored, setting more stringent constraints on the allowed region in the plane (m(X), sin2(θ)), where θ is the mixing angle.

This tiny frequency of hypothetical dark matter particle production is far too low to be a promising dark matter candidate by this production method.

AustralAsian Amazonians
(How'd they get there: walking or paddling bark canoes?)

Sorry, I put [Off Topic] at top, but used arrows not brackets, and it disappeared. Please make a post with your own thoughts on it.