The LambdaCDM model of cosmology (short for the cold dark matter with cosmological constant model) predicts a characteristic scaling relationship between galactic cluster size and velocity dispersion. Reality doesn't agree. The power law should have an exponent of three in the LambaCDM model. The power law actually differs from that by more than four sigma at 4 ± 0.1. 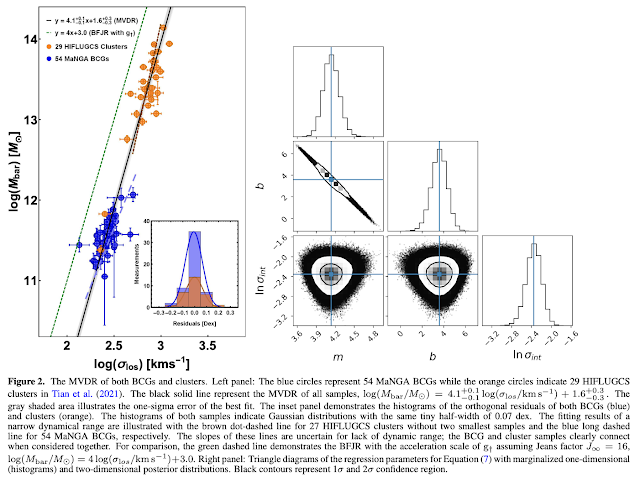 For the first time, we reveal two significant results with 54 MaNGA BCGs: (1) the flat velocity dispersion profiles; (2) a tight empirical relation on the BCG-cluster scale together with cluster samples, i.e., MVDR,

, with a tiny lognormal intrinsic scatter of

This slope is identical to the acceleration relation in galaxy clusters, which is reminiscent of the spiral galaxies, albeit at a larger characteristic acceleration scale. The residuals of the MVDR represent a Gaussian distribution, displaying no correlations with four properties: baryonic mass, scale length, surface density, and redshift. Notably, the MVDR on the BCG-cluster scale provides a strict test, which disfavors the general prediction of the slope of three in the dark matter model.

A kinematic scaling relation is the counterpart of a dynamical scaling relation, which plays a major role in understanding fundamental physics. For examples, Kepler’s law leads to Newtonian dynamics in the Solar system. However, Kepler’s law is no longer applicable in spiral galaxies, well-known as the dark matter (DM) problem. Instead, a different kinematic relation was discovered between the baryonic mass and the flat rotation velocity, called the baryonic Tully-Fisher relation (BTFR, McGaugh et al. 2000; Verheijen 2001; McGaugh 2011; Lelli et al. 2016, 2019). Similarly in elliptical galaxies and galaxy clusters, such a correlation was found between the baryonic mass and the velocity dispersion, called the baryonic Faber-Jackson relation (BFJR, Sanders 2010; Famaey & McGaugh 2012).

In galaxies, the BTFR and the BFJR can be implied by the radial acceleration relation (RAR) in the low acceleration approximation. Not long ago, McGaugh et al. (2016) have explored a tight correlation between the observed acceleration g(obs) = |∂Φ(obs)/∂r| = (v^2)/r and the baryonic acceleration g(bar) = GM(bar)(< r)/r^2 as

In addition, the RAR implied v^4 = GM(bar)g(†) for the BTFR  and σ^4 approximately equal to GM(bar)g(†) for the BFJR (Lelli et al. 2017; McGaugh 2020; Milgrom 2020). Particularly, those correlations were clearly described in Modified Newtonian Dynamics (MOND, Milgrom 1983) about four decades ago. Furthermore, MOND has been tested in gravitational lensing effects (Tian et al. 2009; Tian & Ko 2019; Brouwer et al. 2021). However, MOND found a residual missing mass in galaxy clusters (Sanders 2003; Famaey & McGaugh 2012), which questioned the validity of the RAR on the cluster scale.

with a larger acceleration scale g(‡) = (2.0±0.1)×10−9 m s−2 than observed in rotating galaxies. The CLASH RAR is a tight correlation with a small intrinsic scatter σint = 15%. Other works also demonstrate a similar acceleration scale in galaxy clusters (Pradyumna et al. 2021).

While supposing the validity of the CLASH RAR in dynamics, one can derive mass-velocity dispersion relation (MVDR), σ^4 approximately equal to GM(bar)g(‡), on the BCG-cluster scale. Moreover, its implications include a flat velocity dispersion profile in both BCGs and clusters. This similarity is reminiscent of the RAR in galaxies, albeit with a larger acceleration scale g(‡).

Recently, Tian et al. (2021) have quantified the MVDR with 29 galaxy clusters in the HIghest X-ray FLUx Galaxy Cluster Sample (HIFLUGCS). In their studies, the baryonic mass was dominated by X-ray gas (Zhang et al. 2011) plus the stellar mass estimated on the scaling relation (Giodini et al. 2009). All 29 HIFLUGCS clusters illustrated a flat tail in the line-of-sight (los) velocity dispersion profile. By Bayesian statistics, have obtained the MVDR in galaxy cluster as

with a small intrinsic scatter of σint = 12 ± 3%. In addition, this intercept implied a consistent acceleration scale g(‡) of the CLASH RAR. Consequently, the success of an MVDR in galaxy clusters raises the same issue in BCGs.

Although the kinematic scaling relations were widely studied in BCGs such as the Faber-Jackson relation and the fundamental plane (e.g., see Oegerle & Hoessel 1991; Zaritsky et al. 2006; Bernardi et al. 2007; Samir et al. 2020), it has never been clear if there is continuity in a single MVDR from the scale of individual BCGs to clusters of galaxies (Sanders 1994). As for the flat profiles of BCGs, it has been a lack of systematic studies of the velocity dispersion profiles. Besides, there is only one BCG per cluster, and sufficiently sensitive, spatially resolved observations have been rare until now.

The discussion section of the paper explains:

For the first time, we reveal a tight empirical kinematic correlation, i.e. MVDR, on the BCG-cluster scale. The MVDR is a counterpart of a dynamical relation rather than a coincidence, which can be derived by the CLASH RAR (Tian et al. 2020). As a new discovery of a strong correlation, the MVDR can provide a crucial test for the dark matter problem.

4.1. Consistency with the CLASH RAR

The CLASH RAR derive three implications of the kinematics in BCGs and clusters (Tian et al. 2020, 2021): (1) the flat velocity dispersion profile in BCGs; (2) the flat velocity dispersion profile in galaxy clusters; (3) the MVDR on the BCGcluster scale as σ^4 ∝ GM(bar)g(‡). Initially, the implications in galaxy clusters were first confirmed in Tian et al. (2021) for (2) and partially (3), see Equation (3). Subsequently, our studies examine the rest of (1) and (3) in MaNGA BCGs and validate all the implications of the CLASH RAR. In addition, the MVDR on the BCG-cluster scale is identical to that in HIFLUGCS clusters, see Equation (7) and Equation (3).

Besides all the success of our results, one exception in our samples needs to be stressed. BCG ‘8943-9102’ displays a declining profile and contributes the smallest velocity dispersion among the sample. This exception raises an interesting issue on BCGs: whether it appertains to a flat profile inherently.

The ΛCDM model implied the slope of three for the MVDR on the BCG-cluster scale, by assuming a constant baryon fraction (e.g., see section 4.2 in Tian et al. 2021). According their studies, the prediction in the ΛCDM model demonstrated a discrepancy for smaller galaxy clusters. Coincidentally, MaNGA BCGs also disfavors the ΛCDM model with the same offset. On the contrary, the BFJR of elliptical galaxies were explained by adopting the abundance matching relation (e.g., see the discussions in Desmond & Wechsler 2017; Navarro et al. 2017). Regardless, it still remains a mystery of such an explanation on the BCG-cluster scale.

MOND naturally explained the slope of four for the MVDR on the BCG-cluster scale, although a larger acceleration scale g(‡) needs to be explained. One conceivable interpretation is the acceleration scale depending on the depth of the potential well (Zhao & Famaey 2012; Hodson & Zhao 2017). Besides, two characteristic scales could imply an underlying phase transition mechanism behind. Nevertheless, our discoveries provide a strict test for the attempts on the fundamental theory in MOND paradigm.

ever consider blogging on paper that describes MOND Fail?

We show that Modified Newtonian Dynamics (MOND) predict distinct galactic acceleration curve geometries in g2-space - the space of total observed centripetal accelerations gtot vs the inferred Newtonian acceleration from baryonic matter gN - and corresponding rotation speed curves: MOND modified gravity predicts cored geometries for isolated galaxies while MOND modified inertia yields neutral geometries, ie. neither cuspy or cored, based on a cusp-core classification of galaxy rotation curve geometry in g2-space - rather than on inferred DM density profiles. The classification can be applied both to DM and modified gravity models as well as data and implies a {\it cusp-core} challenge for MOND from observations, for example of cuspy galaxies, which is different from the so-called cusp-core problem of dark matter (DM). We illustrate this challenge by a number of cuspy and also cored galaxies from the SPARC rotation curve database, which deviate significantly from the MOND modified gravity and MOND modified inertia predictions.

It sounds familiar, but I'll take another look. At age 50, I've learned not to trust my memory for everything.