Are The Genetically Steppe Bell Beaker People An Offshoot Of The Corded Ware Culture?

Davidski at Eurogenes has been developing the theory that the Bell Beaker people with steppe ancestry in Europe, and not just the cultures widely assumed to derive from the Bronze Age Northeast European Corded Ware Culture both have the same basic source.
His argument runs primarily from phylogeny. It has long been known that ancient DNA from the Corded Ware Culture is rich (arguably dominant) in Y-DNA R1a-M417, which is ancestral to all of the Y-DNA R1a clades that are predominant among Eastern and Central European Indo-European language speakers. 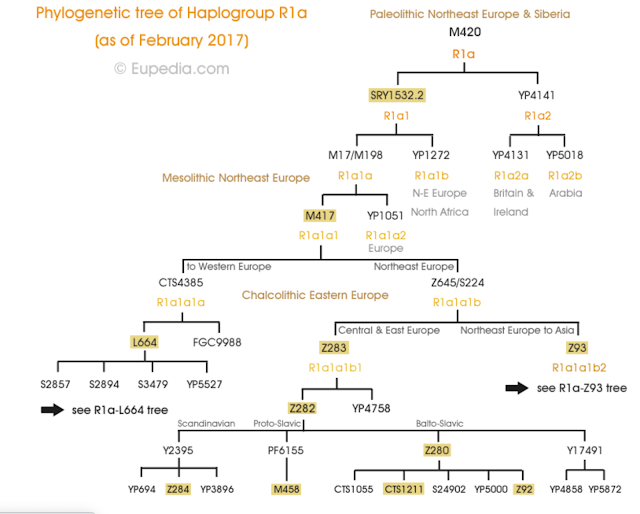 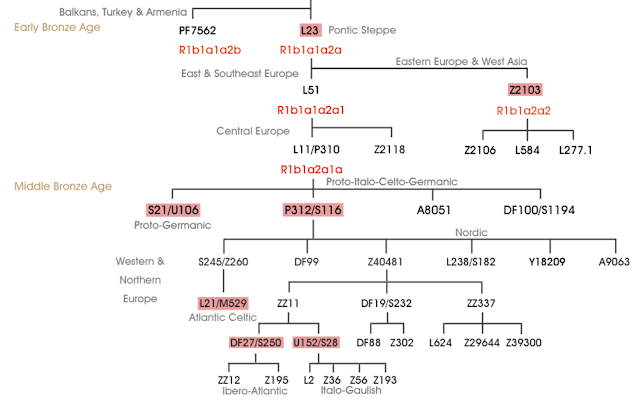 From Eupedia.
The initial assumption was the there was an unsampled population of Yamnaya people, presumably in the west, where the steppe meets the Balkans, in which there were Yamnaya people with Y-DNA R1b-L51 rather than the sister clade Y-DNA R1b-Z2103. The Yamnaya's patrilineal descendants are described in the chart below and are relatively minor contributors to the modern West Eurasian gene pool. 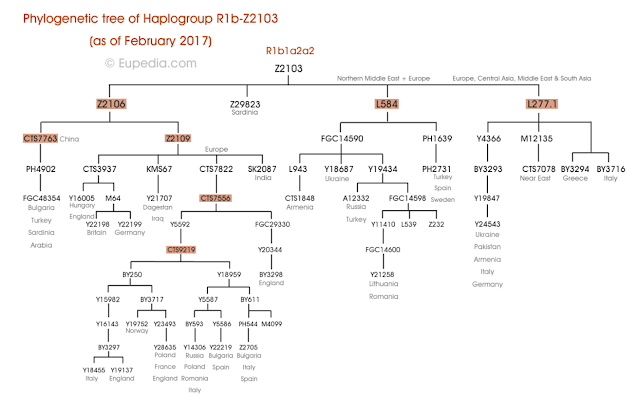 But, according to Davidski, at some point, ancient DNA from a significant number of men who geographically and archaeologically were Corded Ware Culture men were found with Y-DNA R1b-L51, suggesting that the sister clade to the Yamnaya R1b-Z2103 was found in the forested steppe to the North of the Yamnaya culture proper, and not to the west where the steppe meets the Balkans.
Fierce competition of patrilineal and patrilocal clans within the Corded Ware Culture is what causes Y-DNA R1a-M417 and R1b-L51 to become dominant.
As Davidski summarizes and clarifies in comments on his most recent post:

I hope to update this post with journal article references at some point.
This isn't a complete narrative, but it is much closer than it was and quite different from what seemed like the most plausible hypothesis not very long ago. The paradigm has not caught up and still focused on the related but less directly Yamnaya people as the source of European Indo-Europeans.
The Details
In a July 20, 2021 post he sets forth this hypothesis more fully:

There's been a lot of talk lately about the finding that the peoples associated with the Corded Ware and Yamnaya archeological cultures were close cousins (for instance, see here). As I've already pointed out, this is an interesting discovery, but, at this stage, it's difficult to know what it means exactly.
It might mean that the Yamnayans were the direct predecessors of the Corded Ware people. Or it might just mean that, at some point, the Corded Ware and Yamnaya populations swapped women regularly (that is, they practiced female exogamy with each other).
In any case, I feel that several important facts aren't being taken into account by most of the interested parties. These facts include, in no particular order:

- despite being closely related, the Corded Ware and Yamnaya peoples were highly adapted to very different ecological zones - temperate forests and arid steppes, respectively - and this is surely not something that happened within a few years and probably not even within a couple of generations
- both the Corded Ware and Yamnaya populations expanded widely and rapidly at around the same time, but never got in each others way, probably because they occupied very different ecological niches
- despite sharing the R1b Y-chromosome haplogroup, their paternal origins were quite different, with Corded Ware males rich in R1a-M417 and R1b-L51 and Yamnaya males rich in R1b-Z2103 and I2a-L699

I suppose it's possible that the Corded Ware people were overwhelmingly and directly derived from the Yamnaya population. But right now my view is that, even if they were, then the Yamnaya population that they came from was quite different from the classic, R1b-Z2103-rich Yamnaya that spread rapidly across the steppes.
Indeed, perhaps what we're dealing with here is a very early (proto?) Yamnaya gene pool located somewhere in the border zone between the forests and the steppes, that then split into two main sub-populations, with one of these groups heading north and the other south? 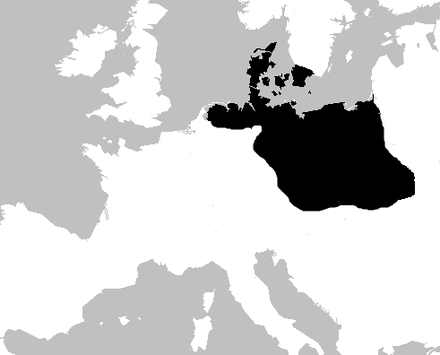 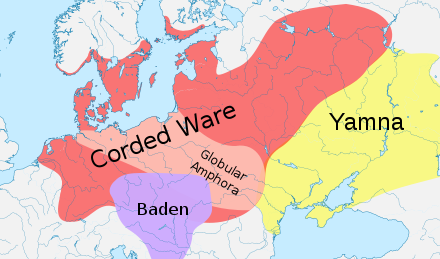 Single Grave term refers to a series of . . .  communities of the 3rd millennium BCE living in southern Scandinavia, Northern Germany, and the Low Countries that share the practice of single burial, the deceased usually being accompanied by a battle-axe, amber beads, and pottery vessels.

R1a-M417 and R1b-L51 are by far the most important Y-chromosome haplogroups in Europe today. More precisely, R1a-M417 dominates in Eastern Europe, while R1b-L51 in Western Europe.
It's been obvious for a while now, at least to me, that both of these Y-haplogroups are closely associated with the men of the Late Neolithic Corded Ware culture (CWC). Indeed, in my mind they're the main genetic signals of its massive expansion, probably from a homeland somewhere north of the Black Sea in what is now Ukraine.

I'm still not exactly sure how the east/west dichotomy between R1a and R1b emerged in Europe, but, thanks to a new paper by Papac et al. at Science Advances, at least now I have a working hypothesis about that. . . .
so even though the CWC was clearly a community of closely related groups, there must have been some competition between its different clans. And since these clans were highly patriarchal and patrilineal, this competition probably led to different paternal lineages dominating different parts of the CWC horizon, with M417 becoming especially common in the east and L51 in the west.

Of course, the expansions of post-Corded Ware groups, such as the M417-rich Slavs in Eastern Europe and L51-rich Celts in Western Europe, were also instrumental in creating Europe's R1a/R1b dichotomy, but obviously these groups were in large part the heirs of the CWC.

Bell Beaker Men With And Without Steppe Ancestry
Bell Beaker men from Iberia in the early few centuries of this culture do not have enhanced steppe ancestry, suggesting that Indo-Europeans from the steppe were converted to the Bell Beaker culture by cultural means at some point fairly early on somewhere in Western Europe, rather than having the culture spread purely by expansion and demic replacement from a common source.
Posted 4:47 PM
Email ThisBlogThis!Share to TwitterShare to FacebookShare to Pinterest
Labels: culture, Europe, genetics, history, language