Australia Once Had A Huge Flying Dinosaur

The newly described flying Australian dinosaur is "A" (the human form is for scale, it did not co-exist with humans).

Australia's largest flying reptile has been uncovered, a pterosaur with an estimated seven-metre wingspan that soared like a dragon above the ancient, vast inland sea once covering much of outback Queensland. . . .
"It's the closest thing we have to a real life dragon," Mr Richards said.
"The new pterosaur, which we named Thapunngaka shawi, would have been a fearsome beast, with a spear-like mouth and a wingspan around seven metres. . . .
"This thing would have been quite savage.
"It would have cast a great shadow over some quivering little dinosaur that wouldn't have heard it until it was too late."
Mr Richards said the skull alone would have been just over one metre long, containing around 40 teeth, perfectly suited to grasping the many fishes known to inhabit Queensland's no-longer-existent Eromanga Sea. 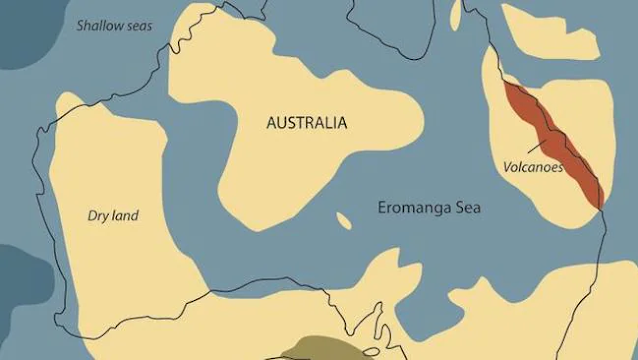 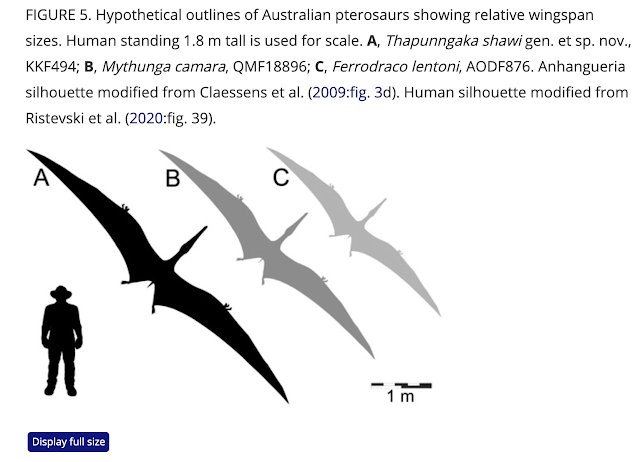 From here via Science Daily.

The sea is named after the town. "The town lies on the edge of what is called the Eromanga Inland Sea, which existed in the Early Cretaceous. The Eromanga region has abundant oil wells and opal mines. Dinosaur fossils, including Australia's largest dinosaur a titanosaur species of sauropod, have also been found here making it an area of interest for palaeontologists. It is located on Ngandangara territory. . . .

Eromanga has been touted as the town in Australia located the farthest from any ocean. However, this claim does not stand up to scrutiny. See Pole of inaccessibility for approximations of other locations in Australia that could also make such claims. . . .

The name of the town Eromanga goes back as far as about 1860. The name is thought to have come from an Aboriginal word that means "hot gale plain" or "windy plain", though the language and dialect is unknown.[2][3]"

The albatross with up to a 3.4 meter wingspan has the largest extant bird wingspan. https://www.livescience.com/albatross.html The largest wingspan that a bird ever had was about 6.4 meters from an extinct species about 50 million years ago called a pelagornithid (also known as bony toothed birds). https://www.smithsonianmag.com/science-nature/scientists-reveal-what-may-be-largest-flying-bird-ever-180976128/

A wingspan of 6-7 meters is approximately the largest possible wingspan bio-mechanically for birds. https://www.pnas.org/content/111/29/10624/

They had the Quetzalcoatlus at the Houston Museum of Natural History. It was huge. Size of a Cessna the signage claimed and it looked it. So cool, grandkids were like 'meh'.