This is something that is unsurprising on the Great Plains, but wouldn't be common knowledge when it comes to the mountains (although high desert certainly isn't an optimal environment for tree species diversity) or near the Pacific Coast.

The deep South has the most rich diversity of tree species in the continental United States. 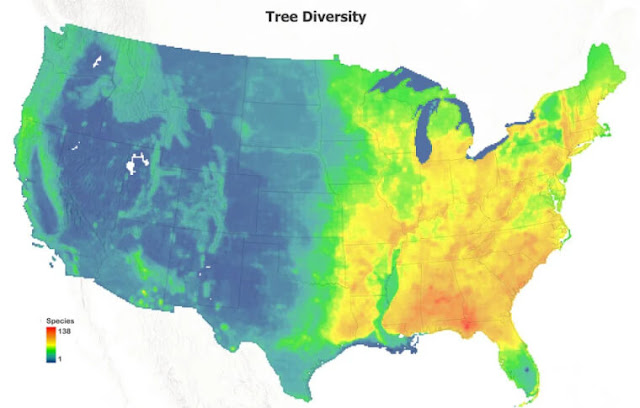 Hum, Interesting that the flood plain of the Mississippi has so much lower diversity than the surrounding uplands. (For low enough value of up.)
Cheers,
Guy

It's a question of climate long-term stability vs. size of the ecosystem.

Where I live was under a mile of ice mot that long ago. The oaks and maples and what not are almost the equivalent of invasive species.

I'm from Memphis. 2 things
1. Intense cultivation, so similar to the Great Plains in that regards.
2. Remaining wild bottomlands flood regularly and would kill most trees not adapted to standing water. I can't answer why that is an uncommon trait. I know willows expand aggressively in those ecosystems, and where the water never drains you get the Cypress near monocultures