The pattern of a small number of surnames accounting for most of the population found in China and Korea is also true of Vietnam where 89% of people have one of fourteen surnames (the link is to the Facebook page of a somewhat regular reader). 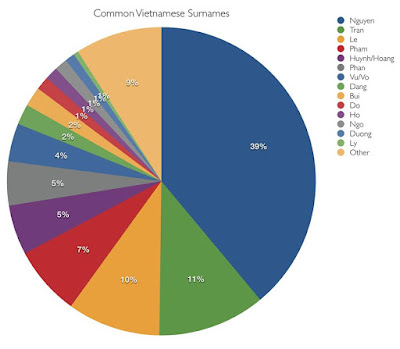 There are historical reasons for this in recorded history. In both Korea and Vietnam, at least, a common pattern was to take the surname of the aristocratic house to which you owed allegiance in the still somewhat feudal era in which surnames were adopted. In Vietnam, some political reversals and turns of fate at critical moments caused members of losing factions to adopt the surnames of winning factions to avoid persecution. I haven't read any accounts of the parallel process in China, but suspect that it is similar.
Posted 9:48 AM
Email ThisBlogThis!Share to TwitterShare to FacebookShare to Pinterest
Labels: China, culture, history, Korea, language, Vietnam

Lots of fascinating background is available at Language Log. http://languagelog.ldc.upenn.edu/nll/?p=30549