The ATLAS experiment at the Large Hadron Collider has published the first W boson mass measurement at the LHC.

* The Particle Data Group's world average of W boson mass measurements (which does not include any LHC measurements) puts it at 80.385 +/- 0.015 GeV.

* Now, the LHC result is 80.370 +/- 0.019 GeV. This value is between the electroweak fit value and the value from prior measurements from LEP and Tevatron. 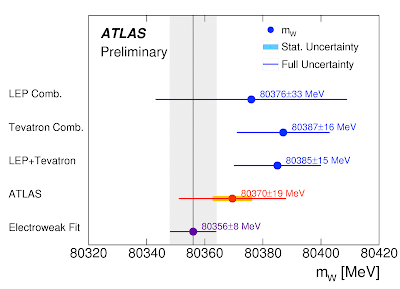 The differences in the measurements are pretty subtle.

All of the values above are consistent with each other at the two sigma level. All of the measured and fitted values agree to three significant digits (80.4 GeV). Even the square of the values differ by less than 0.1%.

The W boson mass is one of the experimentally measured parameters of the Standard Model of Particle physics. In addition there are the masses of other two fundamental bosons (the Z boson and the Higgs boson), the twelve fermion masses (six quark masses, three charged lepton masses and three neutrino mass eigenstates), the four parameters of the three by three CKM matrix, the four parameters of the three by three PMNS matrix, and three dimensionless coupling constants (electromagnetic, weak and strong), for a total of 26 experimentally measured parameters.

While there are 26 independent degrees of freedom in the Standard Model, any particular set of 26 parameters is not unique. There are multiple ways to parameterize the CKM and PMNS matrixes. One could take the Yukawa's of the fundamental fermions with the Higgs field, or could take all the fermion masses at a single energy scale, or could take pole masses for each of them. You could include both the W boson and Z boson masses, or could use just one of them and the weak mixing angle which is a function of their relative sizes. No particular parameterization of these 26 degrees of freedom is really any more fundamental than another. (One recent paper claims that the PMNS matrix can actually be summarized with just three, rather than four, independent parameters.)

Other Standard Model physical parameters can, in principle, at least, be derived from the other constants, although many are, in practice, also measured experimentally. For example, the experimentally measured value of the Higgs vev is 246.2279579 +/- 0.0000010 GeV. Conceptually, this is a function of the SU(2) electroweak force coupling constant g and the W boson mass. In practice, it is determined using precision measurements of muon decays. Similarly, all of the properties of the hadrons including their masses can, in principle, be determined from these fundamental Standard Model constants, although, in practice, the experimental measurements of these quantities are much more precise than any calculation from first principles that it is possible to do at this time.

There are other properties of the universe that can only be described with experimental measurements (e.g. the total number of baryons in the universe, or the age of the universe), but none of the other parameters are fundamental components of a fundamental physical law of nature that have to be measured.

What We Know About The 30 Fundamental Constants

We have, at a minimum, an order of magnitude accuracy measurement of 29 of them. We still do not know the 30th, the value of the CP violating parameter of the PMNS matrix, to any meaningful level of accuracy, although it is more likely non-zero than it is to be zero.

What We Don't Know But Suspect About The 30 Fundamental Constants

They certainly don't look like they are really "independent" of each other. The fermion masses and CKM/PMNS matrix parameters, for example, display a certain order even though a combination of imprecision in measurement and lack of imagination has prevented us from discovering a precise functional relationship between these parameters. There are mass hierarchies, for example, some of which have been described with great precision, such as Koide's rule for the charged leptons.

But, for now, this is an area of active investigation and speculation, and it has little or no practical engineering effects unless it sheds light on new beyond the Standard Model physics, because we will have precision measurements of all 30 of them before any theory to derive them from more fundamental theories gains a consensus in the field.
Posted 5:59 PM
Email ThisBlogThis!Share to TwitterShare to FacebookShare to Pinterest
Labels: conjectures, physics, Standard Model physics