The evidence that Britain, Ireland, Thule and numerous other coastal and island place names in Britain and Ireland are Punic in origin, as explained at length in this blog post and some related blog posts, is surprisingly solid.

Indeed, there are multiple collections of strong physical and linguistic evidence to support the existence of a long term Punic maritime trade relationship with the British Isles and Punic immigrant community in coastal towns and cities. This continued for about two thousand years from around the time of Bronze Age collapse until several centuries after the collapse of the Western Roman empire. 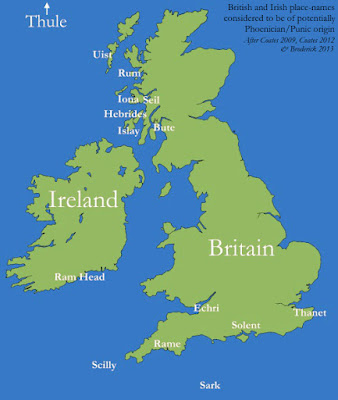 The Phoenician language and its later, divergent form Punic are extinct Semitic languages that originated in the Near East and were spoken in antiquity across into North Africa and southern Iberia by Phoenician and Carthaginian traders and colonists. Needless to say, an origin for a number of British and Irish names in these languages is an intriguing possibility, and such a linguistic hypothesis does, in fact, have a potential historical context too. A degree of direct contact between the ancient Punic world and pre-Roman Britain has, after all, often been argued for since the sixteenth century on the basis of a small number of Classical sources that seem to point in this direction, and in recent years this notion has gained a degree of additional support from a variety of numismatic, isotopic, and archaeological evidence, as has been discussed in previous posts. . . .

[I]t is interesting to note that a Punic origin has also been tentatively suggested for three major island names in the region as well as a number of more minor island and coastal names, the names in question being Britain, Ireland and Thule. Needless to say, these suggestions are perhaps the most contentious of all those outlined below, not least because Britain and Ireland already have frequently cited Celtic etymologies, in a notable contrast to the more local or regional names covered here, with Britain usually believed to derive from a word meaning 'the people of the forms' or 'the tattooed people', whilst Ireland (Éire) is often considered to mean 'the fat, or fertile, country'. However, as Broderick in particular has pointed out, these etymologies are not, in fact, wholly certain nor universally agreed upon, and neither are they totally without linguistic issues; moreover, it might be wondered how plausible some of the proposed meanings are as specific people-/country-names too (the use of tattooing and body art was not, for example, confined or specific to the Britons, but seems rather to have been fairly widespread in Iron Age Europe).

In this light, it is intriguing to observe that Phoenician/Punic etymologies are also available for both of these major island-names, giving the ‘tin land’ (pretan, ‘tin’) for Britain (*Pritan-) and the ‘copper island’ (*’i: weriju:, ‘island of copper’) for Éire/Ireland (*Īweryon).

Another post in the series on the name of the former island of Thanet (it became a peninsula in the Middle Ages) notes that:


If there is therefore a credible linguistic case and possible context for a Punic origin for Thanet, what then of the historical and archaeological context?

Certainly, there is a small amount of well-known textual evidence that might have some bearing on this, not least the classical references to a Carthaginian explorer named Himilco. Himilco undertook a maritime expedition—with 'hints of colonization'—north from Cadiz and the Pillars of Herakles (Straits of Gibraltar) sometime just after 500 BC or thereabouts, and it is thought that he visited Britain and Ireland as part of this.(9)

Similarly, Strabo (Geography, 3.5.11) mentions the important ancient tin trade with the Kassiterides, the 'Tin Islands', which have often been credibly identified with either the Isles of Scilly or Cornwall, and goes on to state that 'in former times it was the Phoenicians alone', from Cadiz, 'who carried on this commerce'.(10)

A map of Carthaginian coins found in Britain also often coincides with the location of putatively Punic place names: 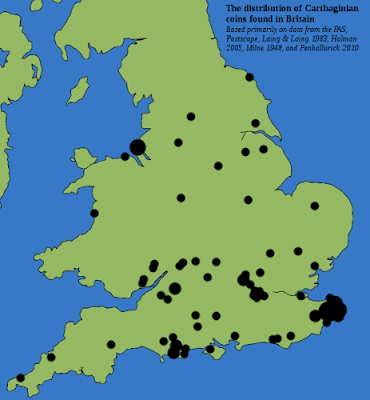 With regard of oxygen isotope analysis of human remains in Britain a third post notes that:


Several key points emerge from the above summary of burial sites producing oxygen isotope evidence indicative of the presence of people from North Africa and southern Iberia in Britain between c. 1100 BC and c. AD 800, three of which are highlighted here by way of a conclusion.

First and foremost, it is important to note that at least some migrants from these areas appear to have been present in Britain during all periods from the Late Bronze Age onwards. Whilst the presence of people from North Africa in Roman Britain is to a large degree unsurprising, as they are otherwise attested via literary and epigraphic sources, the fact that it can be shown that people from these areas were very probably also present in Bronze Age, Iron Age and early medieval Britain is a point of some considerable interest.

Second, the proportion of such individuals in each of the cemeteries surveyed is significant. For example, around a fifth of those buried in the Cliffs End prehistoric cemetery have oxygen isotope values probably indicative of such origins, as do around a quarter of those tested from the three early medieval cemeteries in South Wales and the Late Roman cemetery at Winchester, whilst at Roman Gloucester the proportion may be as high as a third.

In this context, it is interesting to note that the anthroposcopic/craniometric analysis of two Roman cemeteries at York similarly points towards the presence of a potentially large number of people whose own or family origins lay in North Africa, with 11%–12% of those examined considered very likely to be of 'African descent', and yet others thought to have potential 'mixed' or 'black' ancestry, up to a possible maximum of 38% of the population buried at Trentholme Drive and 51% of the population in the higher-status The Railway cemetery. Of course, the sites and cemeteries surveyed here are likely to be to some extent exceptional, being located either at local capitals or close to the coast, but these results are nonetheless fascinating and certainly imply that some areas of Britain, at least, saw a degree of immigration from North Africa and/or southern Iberia in the early medieval period and before.

Finally, it is interesting to note that the potential migrants to Britain from North Africa and/or southern Iberia discussed above include men, women and non-adults, implying that contact between Britain and these areas was not solely the preserve of male mercantile or military groups, as has sometimes been assumed. Indeed, in some cases women and non-adults actually form the majority of the migrants identifiable there via oxygen isotope analysis, as is the case at Winchester and in South Wales.

Another piece of evidence in a fourth post, involves an Mediterranean anchor found in Britain. It notes:

a recently-recognised find of a fifth- to mid-second-century BC Mediterranean ship anchor from British coastal waters. Previous posts on this site have discussed the presence of a significant quantity of Greek autonomous coinage of primarily the fourth to second centuries BC in Britain, including Carthaginian/Punic, Ptolemaic, Numidian and Indo-Greek issues. Needless to say, finds of early Mediterranean anchors off the coast of Britain would seem to add further weight to the argument that there was a degree of long-distance maritime contact between Britain and the Mediterranean during the first millennium BC and that some, at least, of the above coins may well be genuinely ancient, pre-Roman losses that were brought to Britain by Mediterranean traders.