Recent genome-wide studies of both ancient and modern indigenous people of the Americas have shed light on the demographic processes involved during the first peopling. The Pacific northwest coast proves an intriguing focus for these studies due to its association with coastal migration models and genetic ancestral patterns that are difficult to reconcile with modern DNA alone. Here we report the genome-wide sequence of an ancient individual known as "Shuká Káa" ("Man Ahead of Us") recovered from the On Your Knees Cave (OYKC) in southeastern Alaska (archaeological site 49-PET-408). The human remains date to approximately 10,300 cal years before present (BP). We also analyze low coverage genomes of three more recent individuals from the nearby coast of British Columbia dating from approximately 6075 to 1750 cal years BP. From the resulting time series of genetic data, we show that the Pacific Northwest Coast exhibits genetic continuity for at least the past 10,300 cal BP. We also infer that population structure existed in the late Pleistocene of North America with Shuká Káa on a different ancestral line compared to other North American individuals (i.e., Anzick-1 and Kennewick Man) from the late Pleistocene or early Holocene. Despite regional shifts in mitochondrial DNA haplogroups we conclude from individuals sampled through time that people of the northern Northwest Coast belong to an early genetic lineage that may stem from a late Pleistocene coastal migration into the Americas. 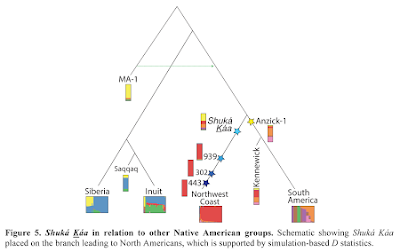 The claim of population structure from a site in or near Beringia long after more people in the Native American founding population migrated to the South is notable. As a commentator at the Eurogenes blog explains:

@Matt
The new Alaskan genome might have big picture implications actually - in ADMIXTURE he comes out as about half Mal'ta, despite having umpteen Amerindian components to choose from, while Anzick-1 and Kennewick do not (the latter does have a bit of it though). And in TreeMix he is basal to all Amerindians without an edge, or groups with North Amerindians but with an edge from Europe. It might be due to contamination, but if not it looks like some kind of very old population structure. The supplementary information is not out yet though so hard to judge any of this.