A new (to humans) dinosaur species was discovered by one of my friends from high school, who also discovered one of the only other examples of a related species in 1999. It has a range that extended, at least, from North Carolina to Texas. The Carnian Age in which they flourished was 237 to 228.4 million years ago.

It looked a bit like a crocodile, although it was not terribly close related. Both were reptiles, and crocodiles are roughly as closely related to them as birds are within the reptiles, but the cladistic commonality ends there. 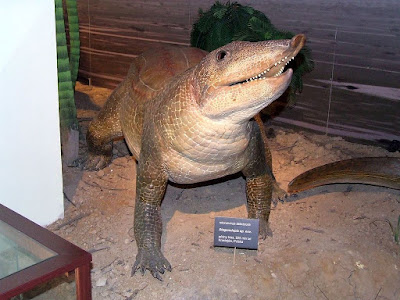 We describe a new species of the aetosaur Coahomasuchus, C. chathamensis, based on an incomplete, but largely articulated, anterior portion of a skeleton recovered from a quarry in the Upper Triassic Pekin Formation of Chatham County, North Carolina. This is only the second documented occurrence of Coahomasuchus, with the other being the holotype of C. kahleorum Heckert and Lucas, 1999 from the Upper Triassic Colorado City Formation of Texas. Although much of the specimen is the same size as the holotype of C. kahleorum, the dorsal paramedian osteoderms of the North Carolina taxon are considerably (~1.3×) wider than homologous counterparts in C. kahleorum, and the ventral thoracic osteoderms are also rectangular (~1.5× wider than long), rather than square, presumably to accommodate the wider body. This is a rare instance where two articulated specimens of closely related aetosaur species are available for direct comparison of homologous osteoderms. Isolated osteoderms with similar ornamentation from the same locality indicate that C. chathamensis may have been one of the earliest aetosaurs to attain the broad osteoderm proportions (width:length >3.5:1) otherwise known solely from later branching, spinose taxa such as Typothorax. The co-occurrence of Lucasuchus and Coahomasuchus in both North Carolina and Texas supports past correlations indicating an Otischalkian (Carnian) age for these strata and demonstrates that plesiomorphic, non-spinose aetosaur genera were not necessarily endemic to a single basin in North America.

Posted 9:37 AM
Email ThisBlogThis!Share to TwitterShare to FacebookShare to Pinterest
Labels: biodiversity, evolution