Cahokia, near modern day Saint Louis, was the capitol of the Mississippian culture's empire in North America which extended to essentially all of the Mississippi River basin and has trade connections in the American Southeast that extended as far as the Atlantic shores of the Carolinas.

The Osage Indian tribe appears to be the most direct modern cultural descendant of the Cahokian culture which very likely spoke some early version of the Siouan languages associated with the geographic region shown below prior to European contact. 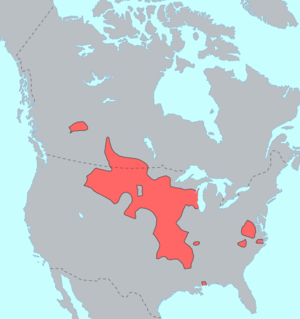 An Ars Technica piece fleshes out what the city's life was like at its heyday ca. Y1K, and how it fell in a very accessible way. All of this is pretty much old news to readers of this blog, but it is told in a very engaging way.

Previous posts on this topic at this blog include:

* Y1K: A Slice of Global History That Shaped The Modern World