Why Do Serbian And Sumerian Share Some Core Vocabulary?

At the Old European culture blog, some intriguing lexical connections between the Serbian language and words in the Sumerian language, that do not look like mere coincidences, have been identified. The Sumerian words are:

The first two correspond to the proper phrase "iz ruku" which in a less formal speech register would be "iz rukama" (literally "from the hand" or "from the hands". Ruka is a root meaning "hand" or "arms" that is specific to the Slavic languages and borrowed from Slavic into the Balto-Slavic Lithuanian and Latvian languages.

The second corresponds to "Na dan" (masculine), "Na dana" (feminine), and "Na dano" (plural), with the word "Na" in this context representing a less formal speech register, meaning "give this to him". As the post author notes: "the Slavic verb "dati" meaning "to give" comes from Indoeuropean root "deh₃-",

But the use of the word "Na" is idiosyncratic to Serbian. In the phase above it can mean "to" as part of a phrase, and in isolation as an imperative "Na!" it means "here you go", "here it is", or "take it".'

Why Is This Weird?

Languages borrow words all the time, what makes this unusual?

2. Lack of Overlap In Time

Sumerian lived own as a liturgical language, a bit like Latin in the Roman Catholic Church, Coptic in Ethiopian Orthodox religious use, Hebrew before it was resurrected for daily use in Israel, Classical Arabic in Islam (Arabic is a living language, but the Classical Arabic is about as remote from modern dialects as Middle English is from modern English), Sanskrit in Hindu religious contexts, Old Persian in Zoroastrian religious texts, and Hattic in Hittite Anatolia. But, Sumerian died as a liturgical language around the 1st century CE.

In contrast, Slavic wasn't spoken outside its homeland before the 5th century CE, and wasn't spoken in Serbia before the 6th century CE (five centuries after even liturgical use of Sumerian had ceased). Slavic is derived from a Balto-Slavic proto-language and from there from Proto-Indo-European. Proto-Indo-European, in turn, probably came into existence around 4000 B.C.E., but as recently as 2000 BCE, the Indo-European languages had only just reached South Asia, Iran, Greece, and the Tarim Basin, and there is a good argument that they had not reached Western Europe at all by that point.

For essentially all of the time period during which Sumerian was a living language, Indo-European languages were still predominantly found on the Pontic-Caspian Steppe where they originated, although they had begun to make inroads into Central Europe and the Baltic region.

Serbia is about 1,000 miles from Iraq roughly along the route taken by the first farmers to bring the Fertile Crescent Neolithic package to Europe.

This distance wouldn't be unprecedented for the expansion of a language family. But, there is no attested evidence of Sumerian or any language related to it, every making it further than the parts of Anatolia (modern Turkey), the Zagros Mountains (basically running along the modern Iraq-Iran border), and the southern Caucasus Mountains where the two highland areas intersect. Likewise, there is no evidence that Sumerian was ever spoken in the Levant or the Aegean.

The homeland of the Slavic languages is quite a bit further north in Poland and the Ukraine. 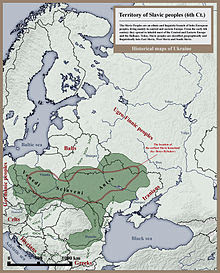 The Slavic language only reached Serbia by the 6th century CE, at which point it was probably replacing now extinct Indo-European languages such as Latin and its likely predecessors in the area, Dacian and Thracian.

Romanian, spoken in Romania which is between the Slavic homeland and Serbia, is a Romance language derived from Latin, but Serbian is not.

4. The Nature Of The Word Overlap

Languages that are not otherwise related routinely pick up loan words from each other. The Southeast Asian words for tea and many African fruits and vegetables which originated in Indonesia have often retained their original Asian names as loan words in the multitude of unrelated languages that purchased these trade goods.

The Mitanni people of the Northern Zagros Mountains in the Bronze Age ca. 1500 BCE, spoke a language very similar to Sanskrit (arguably a dialect of it, rather than a separate language). When the Hittites learned about horses from the Mitanni who were superior horsemen, they adopted the Mttanni technical terminology related to horses and abandoned the relevant words from their own vocabulary.

Sometimes loan words are also picked up because a language has a word or phrase that captures a meaning not found in the borrowing language, such as the adoption into English of the French phrase "je n'ai ce quio" (literally "I don't know what").

But, loan words are far less likely to replace every day vocabulary in a foreign language like "give", "give to me" or "pay". This core vocabulary tends to be much more resistant to fades and the effects of language contact.

5. The Apparent Direction Of The Word Overlap

Sumerian is an agglutinative language that takes what might be phrases or whole sentences in an isolating or analytical language like English into a single word. (Serbian, like many Indo-European languages is in the middle ground as a "fusional language" that is highly inflected, but does not strongly merge whole phrases into words.)

So, it is no surprise that in these cases of shared words, they are single words in Sumerian, but are a pair of words in Serbian.

But, the nature of the words in this case seem to reflect that the Sumerian words were borrowed from a predecessor to Serbian into Sumerian, instead of the other way around.

The prepositional phrases in question in Serbian are combinations of words that have plain meaning as common words in isolation in Serbian. But, when broken apart, the components of the words in Sumerian have no independent meaning that implies the meaning of the whole.

How Did This End Up In Sumerian?

This suggests, in light of the other evidence, that the Serbian phrases "iz ruku", "iz rukama" and "na dano" must have existed in some very similar form either in actual Proto-Indo-European, or in a very early proto-language derived from it, and that somehow Sumerian ended up borrowing these core words into Sumerian.

The most likely place for this exchange of words would seem to be the Black Sea coast, the Caucasus Mountains, or Anatolia, which is in the middle ground between the Slavic homeland of the 5th century, and the furtherest extent of known Sumerian linguistic influence.

This is and of itself is pretty remarkable. While there is evidence of Sumerian borrowing of words from  the Hurrian language (discussed in a 2014 linguistic journal article[1] suggests is related either genetically or through heavy borrowing to the extinct Hurrian language of the northern highlands of the Zagros Mountains). I know of no other documented instances of Sumerian borrowing core vocabulary from an Indo-European language (Sumerian was no longer a living language, for example, by the time that the Indo-European Hittite language was widely spoken in neighboring Anatolia.)

So, this language borrowing from some contemporary Indo-European language into Sumerian is still a real mystery, even with the wealth of clues available to us.

How Did This End Up In Serbian?

Could these words derive from a more basal Indo-European substrate of Serbian?

Given that both the unique meaning of the imperative "Na!" in Serbian meaning "I'm paying you" is specific to Serbian and the phrase "iz ruku" is specific to Slavic languages, it wouldn't be implausible to imagine that thees words are borrowed from the pre-Slavic, pre-Latin Indo-European languages spoken in the vicinity of Serbia prior to the expansion of the Roman era in the Bronze Age from ca. 2000 BCE to perhaps 600 BCE.

For example, an Indo-European substrate language to Serbian that would have had some influence at the time of language shift to the Slavic languages could have been an ill attested Indo-European language such as Dacian, or Thracian, or Illyrian, each of which are clearly much more basal branches of the Indo-European language family than Slavic, that could have persisted due to their character as core vocabulary in the area where they were substrate languages, across subsequent language shifts to Latin (probably limited to priests and other elites) and Slavic.

Hi
To be all clear for your unanswered questions must to know homeland of the Peonian language (Slavic languages) is today Macedonia central Balkan peninsula ancient Peonia.