The Homelands Of Modern Asian Languages And Y-DNA Clades

Half a dozen paternal lines that expanded dramatically ca. 4800 BCE to 3000 BCE and now account for 65% of the population of China.  Each of these paternal lines had origins in a distinct archaeological cultures, and each of them correspond fairly closely to one or two modern language families in the region.

Considering diverse genetic evidences, we revealed that, in East Asia, there were at least two population expansion events in the Paleolithic Era and notably, the latter Paleolithic expansion and climate improvement after Last Glacial Maximum (LGM, about 15 ka) might together facilitate the emergence of agriculture.

In comparison to the Paleolithic expansion, Neolithic expansion had its own characteristics, such as stronger expansion dynamics and sex-specific expansion pattern. According to the Y-chromosome-based tree in our recent studies, we found strong signals of partial paternal lineage expansions during or after the Neolithic transition, for instance, O3a2c1a-F5 (Oα), O3a2c1-F46 (Oβ), O3a1c1-F11 (Oγ), C3a1-F2613 (Cα), Q1a1-M120 (Qα), and O1a1a1-F78 (Oδ), suggesting the influence of a strong bottleneck caused by cultural changes.

Bernard's blog discusses some of the details of the paper. As translated by Google from the French with a few corrections of my own to the translation:

Certain haplogroups have prospered as well. These are O3-F5, O3-F46, O3-F11, O1-F78, C3-F2613 and Q1-M120. About 65% of the current Chinese descend from one of these six paternal ancestors. The dates of expansion are estimated between 5000 and 6800 years ago. One of the questions that remains is who these six ancestors were. Were they the founders of the first Chinese complex societies? Were these neolithic expansions linked to the expansion of the present languages: Austro-Asiatic, Tai, Sino-Tibetan and Austronesian? For example haplogroup O3-M134 has a majority among the speakers of the Sino-Tibetan language, O2-O3-M95 and M7 are in the majority among speakers of Hmong-Mien languages and Austro-Asiatic, O1-M119 among speakers of the Thai-Kadai languages and Austronesian languages, and N-Tat in Uralic language speakers.

Some of the key archaeological cultures are localized on the following map: 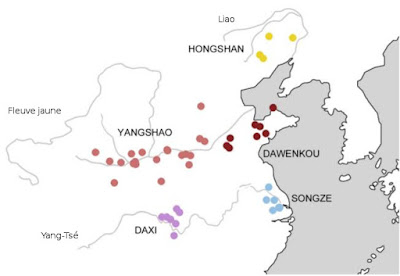 Maju will not be happy. That information has been obvious to me for years. In fact Maju banned me from his blog for maintaining that the Y-DNA O haplotypes had all expanded relatively recently from the region between the Yangtze and Yellow River valleys. Check out this 2007 paper again and you will see exactly why I came to the same conclusion as shown in these two papers: