Eurogenes mentions a paper using ancient disease DNA to track the arrival of the plague in late Neolithic and early Bronze Age Europe, around the time of the 4.2 kiloyear climate event, particularly in Bell Beaker and Indo-European controlled areas. Another paper he identified a little more than a year ago also points to this conclusion. 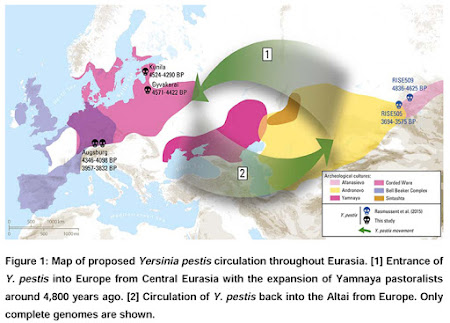 Molecular signatures of Yersinia pestis were recently identified in prehistoric Eurasian individuals, thus suggesting Y. pestis might have caused some form of plague in humans prior to the first historically documented pandemic. Here, we present four new Y. pestis genomes from the European Late Neolithic and Bronze Age (LNBA) dating from 4,500 to 3,700 BP. We show that all currently investigated LNBA strains form a single genetic clade in the Y. pestis phylogeny that appears to be extinct today. Interpreting our data within the context of recent ancient human genomic evidence, which suggests an increase in human mobility during the LNBA, we propose a possible scenario for the spread of Y. pestis during the LNBA: Y. pestis may have entered Europe from Central Eurasia during an expansion of steppe pastoralists, possibly persisted within Europe until the mid Bronze Age, and moved back towards Central Eurasia in subsequent human population movements.

From the body of the new paper:

The first indication of plague in Europe is found in the Baltic region and coincides with the time of the arrival of the steppe component (Allentoft et al., 2015). The two Late Neolithic Y. pestis genomes from the Baltic in this study were reconstructed from individuals associated with the Corded Ware Complex (Gyvakarai1 and KunilaII). The Baltic Y. pestis genomes are genetically derived from the strain that was found in the ‘Andronovo Complex’ from the Altai region, suggesting that the disease might have spread with steppe pastoralists from Central Eurasia to Eastern and Central Europe during their massive range expansion.

The younger Late Neolithic Y. pestis genomes from Southern Germany are genetically derived from the Baltic strains and are found in individuals associated with the Bell Beaker Complex. Previous analysis have shown that Bell Beaker individuals from Germany also carry ‘steppe ancestry (Allentoft et al., 2015; Haak et al., 2015). This suggests that Y. pestis may have been spread further southwestwards analogous to the human steppe component. The youngest of the LNBA Y. pestis genomes (RISE505), found also in the Altai region, descends from the Central European strains, and thus suggest a spread back into the eastern steppes.

The overlapping genetic evidence regarding early disease supports an ultimate steppe origin for Bell Beaker people as well, something already indicated by the pre-Bell Beaker presence of Y-DNA R1b on the Southern part of the European steppe.

This also suggests that immunity may have been particularly important for fitness around the time that lactose tolerance surged in the gene pool, and since milk has immunity boosting Vitamin D in it, the case that lactose tolerance may have had a significant immune system enhancing relevance to the massive selection driven increase in its frequency may be more credible in the face of a highly lethal disease outbreak than it would have been otherwise. If adult milk drinkers survived the plague at a significantly higher rate than adults who did not drink milk, that would give lactose tolerance genes a huge and rapid fitness selection boost.

This paper also tends to support a remote Asian origin for the plague that then migrated to Europe, as opposed to a European origin. But, since it predates any historically attested plague outbreak in either Europe or Asia, and shows an Asian reflux of the disease, it complicates the chronology greatly. It also adds meat to the notion of a shift from inhumation to cremation have a practical fitness benefit in mitigating the spread of the diseases that killed the dead.

The paper doesn't shed light on how virulent this early version of the plague was compared to the Blake Death era in the Middle Ages that killed a third of the population of Europe.

The earlier paper in the journal Cell is as follows:


Summary: The bacteria Yersinia pestis is the etiological agent of plague and has caused human pandemics with millions of deaths in historic times. How and when it originated remains contentious. Here, we report the oldest direct evidence of Yersinia pestis identified by ancient DNA in human teeth from Asia and Europe dating from 2,800 to 5,000 years ago. By sequencing the genomes, we find that these ancient plague strains are basal to all known Yersinia pestis. We find the origins of the Yersinia pestis lineage to be at least two times older than previous estimates. We also identify a temporal sequence of genetic changes that lead to increased virulence and the emergence of the bubonic plague. Our results show that plague infection was endemic in the human populations of Eurasia at least 3,000 years before any historical recordings of pandemics. 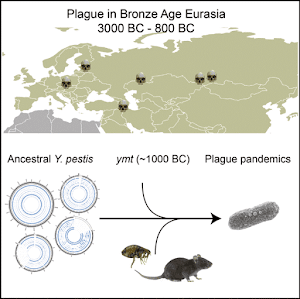 
Study co-author Dr Marta Mirazón-Lahr, from Cambridge's Leverhulme Centre for Human Evolutionary Studies (LCHES), points out that a study earlier this year from Willerslev's Copenhagen group showed the Bronze Age to be a highly active migratory period, which could have led to the spread of pneumonic plague.

"The Bronze Age was a period of major metal weapon production, and it is thought increased warfare, which is compatible with emerging evidence of large population movements at the time. If pneumonic plague was carried as part of these migrations, it would have had devastating effects on small groups they encountered," she said.

"Well-documented cases have shown the pneumonic plague's chain of infection can go from a single hunter or herder to ravaging an entire community in two to three days."

A corrected version of the December 15, 2015 article appears today and corrects the reference to the Andronovo Complex, which did not include the Altai, to the Afanasievo Culture, an innocent mistake identified at Eurogenes.

Note to self: Could LP have conferred plague resistance? This would explain its sudden expansion in this time frame.